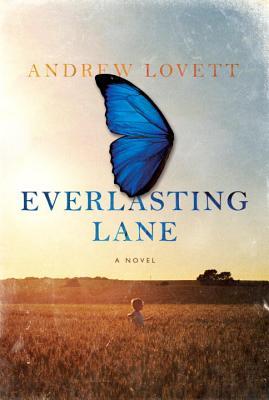 Why do we think that childhood is a golden, untouchable idyll? Childhood is horrible; even the happy, non-traumatic ones, stuffed with loving family, good food, summer vacations, and abundant laughter, weigh on us.

As we pass through the gates of maturity, moving towards our adult selves, we forget the burden of being a child. Proust, with his Sisyphean sentences, knew. Roddy Doyle knew it, wrote it into his perfect novel Paddy Clarke Ha Ha Ha. And Andrew Lovett knows it. His first novel, Everlasting Lane, captures the dreaminess of childhood, and the small details that make it nightmarish as well.

I had a particularly fine childhood, in case you wondered. My parents were kind and affectionate. There were picnics. Ice cream. I liked school, and was allowed to read whatever I wanted. In the summers, my sister and I went to stay with our grandparents. On the weekends, we listened to bluegrass music in the park, hiked in the woods, and rode our bikes around the nearby lake. I do not say that childhood is horrible because mine was. I say it, because childhood is a time of incredible tension between the awakening mind, and the restrictions of being a young person. Children are not allowed to make their own decisions, usually. They do not choose what they will do, how they will behave, when or what they will eat, or what they will study. All these things are decided for them, by the grownups who care about them. For better or worse, children are slowly tamed by their parents and teachers.

As Lovett’s narrator Peter becomes more aware of the world around him, these restrictions start to wear on him, bringing his latent memories to the surface. The adults in Everlasting Lane are mysterious to him – their motives are always clouded. Who knows what they want? Convinced that there is a mystery in the hidden room upstairs, ten-year-old Peter searches for links to his mother’s past. His world is brightly colored, beautifully described:

Ahead of me, Finches’ farm – the farmhouse itself and all the sheds and barns – rose into view, nestled in an orange burst of late afternoon. The farmyard was cluttered with wood, rusting metal, planks and tubes, bales of wire, random wheels, like the dismantled remains of some fancy machine. And the smell, the stink, as if some fairy-tale giant had been left slowly rotting to death in this empty barn, was so wet and heavy the still, warm air was smothered by it.

However, as lovely as Peter’s world is, a shadow has come creeping. In the first few pages, his father dies and his mother removes Peter and herself from their place in London to a small village called Amberley. The new home on Everlasting Lane is new and familiar at the same time, and with the help of two neighbor children, Anna-Marie and Tommie, he follows a skimpy trail of clues that take him from his own backyard, to the village churchyard, to the locked bedroom in his own house.

Along the way, there are the usual “characters,” including a poet nicknamed the Scarecrow Man, and a barmy, cynical scientist named Mr. Merridew. These adults, as well as the slightly-too-precocious Anna-Marie (who swaps sophisticated views on God and existentialism with the headmistress) sap the natural ease of Everlasting Lane. Writing inside a child’s perspective in a book for adults, who may or may not remember their own childhoods, is difficult. For the most part, Lovett pulls it off, and for a first novel this is quite good.

The story is at its best when Lovett abandons all pretensions to artiness and goes full-throttle into Peter’s fantasyland. Killing Nazis, drifting between fairy worlds, and fantasizing about the years ahead, Peter is allowed to be a boy in those moments—not a trope or literary teaching tool, not an allegory for anything. “And maybe the worst thing we could do was solve a mystery,” Peter says, “because Alice was a mystery and a mystery was just another word for a secret and a secret was just another word for truth and when we solved it, when it wasn’t a mystery any more, all we’d have left was the truth. Or maybe nothing.”

At its core, Everlasting Lane is an ode to the last days of true child-ness and all their complications, frustrations, urges, and pains. There is beauty there, too, but as Lovett tells us—and he breaks it to us so gently—we only see that when our innocence is over.