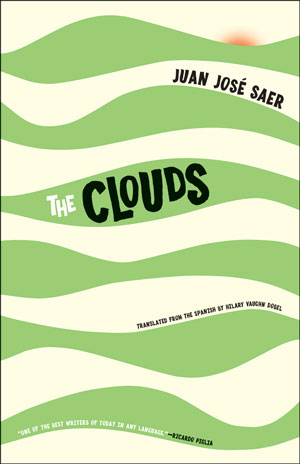 The son of Syrian émigrés, Juan José Saer was born in Argentina in 1937 and moved to Paris in 1968. His novel La ocasión won the Spanish Premio Nadal in 1987. He wrote obsessively about exile, crystalizing place and memory (of the village along the Paraná River, for example, where he grew up). Like Proust, you might say. But, unlike Proust, and likely indebted to the style Hilary Vaughan Dobel brings in her translation, The Clouds captures the tone of Proust’s time without making it too indebted to 19th century literary conceptions. The Clouds, published originally in Spanish in 1997, is not interested in remembering as much as it is in dismantling memory. To read The Clouds is to feel as its narrator, to have “the unmistakable impression that we inhabited one of [the world’s] remotest, most insignificant, and ephemeral corners.”

One grueling summer in Paris when a person’s “shadow pools…as if shriveled by the sun,” Pinchón Garay receives a floppy disk containing the just-translated memoir of the exiled Argentinian Dr. Real. This is a transparently symbolic name. But the experience of reading Real’s memoir (Garay’s prologue is only five pages) is as compelling and languorous as it is overheating. The debt to Proust is no mirage; some have called Saer’s untranslated short story “La Mayor” either a pastiche or a parody of Proust’s high style. The Clouds is something else, however. Dobel near perfectly captures what Saer, indebted to French education, consciously emulates. Having fled the 1968 Argentinian coup that led to Juan Carlos Onganía’s purging of universities, Saer’s education, including, no doubt, exposure to Proust, was French. But the desertification of memory that threatened Proust in À la recherche du temps perdu, Saer transmutes into the tactile uncertainty of the desert, and eviscerating madness.

Dr. Real recalls his experience studying under the predictably quirky experimental psychiatrist Dr. Weiss. Their relationship is that balance of mentor and pupil, sidekick and eccentric genius that produced the greatest detective duos in history (Sherlock and Watson, Nero Woolfe and Archie Goodwin, Hercule Poirot and Arthur Hastings). The two psychologists reside at Casa de Salud, an experimental health facility where the patients roam freely, living in a manner that Watson, Goodwin, and Hastings would appreciate: “Seething lava threatened us from all sides.” While an astute description of the bubbling and deadly scenarios these figures tend to get into, the trope hasn’t aged well. Thankfully, Dr. Weiss is largely cut out by the end, perhaps too sharply, eventually appearing as rarely as M. Soldi’s (translator of Real’s memoir’s) notes. 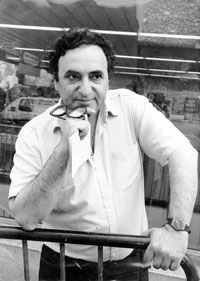 There’s brilliance here. The Clouds holds itself to the standards of detective fiction: Typically, mysteries are associated with piecing together an unassembled mass that fits tightly, give or take a bent piece. Saer writes solely in bent pieces: Real’s account becomes indistinguishable from irreality to the point that, studying a horse, he finds himself “in a different world…in which the outer world was unfamiliar to me” and where “my eyes [were] unnecessary, and that strange expanse of countryside…was not meant for them.” Still, Soldi’s notes reaffirm both the story’s supposed historicity and double fictionality, also assuming that the reader, whoever you are, is Pinchónt Garay. It’s to Real’s relatable and ephemeral epiphany regarding the reality of his knowledge to which Dr. Weiss responds months later, “between the madmen, the horses, and yourself, it’s hard to know which are truly mad.” Unlike the Romantic passion for mania-inducing passionate throes, Real’s experience in the desert is not the revelation itself. Unlike detective fiction, the mystery is not outside of the detective. Trying to discover the reasons for madness, Real reveals the more disturbing and less obvious madness of reason. “Madness and reason are inseparable,” says Dr. Weiss.

Real’s experience of this porousness—in the climactic wandering through the desert, vaguely Christ-like, prolonged by floods and re-routing—owes heavily to his reason and the madness of those patients he has to lead to Casa de Salud: a nymphomaniac nun convinced that sex embodies the physical and spiritual union of Christ; a manic narcissist who believes in establishing a new world order; brothers incapable of speech for their respective quirks; and a catatonic depressive. But the absolute cause of his increasing dissociation is not as indirect as being surrounded by madness (there are, after all, sane escorts). Rather, madness is the natural condition of meditation. When Real, further adding, “on cloudy days, that illusion is perfect and a little unsettling.” Such extreme doubt about the “sham of motion” would suggest madness in some, while with Real it suggests philosophical musings. An idea Saer likely inherited from the father of doubt, René Descartes, who famously began his Meditations by casting doubt on the “illusion” of the real.

It’s in that vein that Rousseau’s Confessions, published in 1782, roughly 50 years prior to Real’s memoir, is a likely inspiration for the story’s progression. Just as Rousseau (a founding figure of the Enlightenment along with Descartes) transitions from a stolid, chronological presentation of his life to the murky and dizzying present tense, Dr. Real devolves into confused circumlocution mirroring the unstable condition of his patient’s thoughts. Nearly fully possessed by the complications of being Real, in a subtle self-reflection on The Clouds’ vague familiarity to fans of Proustian style, the doctor explains of clouds:

Although they were all similar, there did not exist, nor had there ever existed since the origins of the world, nor would there exist until the inconceivable end of time, two that were identical. With their varied forms and the recognizable shapes they portrayed, which dissolved little by little until they no longer looked like anything, or even assumed a shape contradictory to the one they had taken a moment before, they made me feel like a spirit of history, one that would persist through time to change along with the clouds, with the same strange similarity of such things that vanish, in the very instant they arise, to that place we call the past, where no one ever goes.

Proust creates a time and place that is both familiar and palpable. Saer does nothing of the sort: a fictional village with a dramatized horizon overcast with pervasive isolation. And yet, it’s an equally genuine exploration of the difficulties of talking about the past, “where no one ever goes” (an obviously ironic claim for a memoir). “The past is a foreign country,” in the famous opening sentence of L. P. Hartley’s The Go-Betweens, “they do things differently there.” The Clouds, beautifully, warns us there might not be a “there” to turn back to at all. For Saer, who stayed in Paris until his death, this certainly was the case.