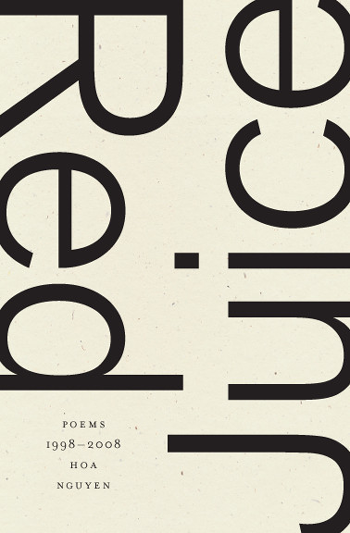 Hoa Nguyen is a poetic tease: her retrospective Red Juice is a decade’s-worth of poetry that tantalizes with glimpses of self-awareness and familiarity just as soon as the lines lose you in non sequitur and obscurity. The poet flutters between intense clarity and seeming nonsense (albeit eloquent nonsense), forcing the reader to dwell over her deceptively short poems, grappling with gut-reactions to the way the work appears on the page.

Reading the book becomes an accomplishment, a brain teaser; steeping the simple language in one’s thoughts to draw out the meaning seems as much a part of Nguyen’s poetry as the words themselves. For all of its length, Red Juice is rewarding—its complexities reveal themselves in intricate patterns of meta-referentiality, historical weight, even humor.

One has to wonder if Nguyen presaged the collection, time-stamped in its very title, as she wrote these poems seven-to-seventeen years ago: they drip with a sense of history, whether the recent past or the Neolithic. With titles like “Dream 5.22.97,” the reader can’t help but picture the Nguyen of the ’90s knowing that cataloging her poetic chronology would be useful in the future.

The tangible dates, however, are the least of Nguyen’s historical markers, which aren’t limited to her literary lifespan: she narrates a casual documentary of America—“You shall hear the story / You shall hear the story how Pau-Puk-Keewis danced / at Hiawatha’s wedding” (15); articulates writerly repetition and the difficult anonymity of recurring tragedy—“I had this idea … Write something ‘new’ about the national tragedy” (102); and links ancient to modern—“Olmecs / (save a few stone faces) / erased in the ’50s by an oil company” (69).

The references appear to come from nowhere, but feel, somehow, deeply appropriate; after all, Nguyen asks, “What isn’t an historic moment”? Their nonlinearity reads well because Nguyen gives little credence to blocky narrative structure, her syntax always wavering, broken, open to interpretation, as in her deliberately ambiguous line breaks (see the stuttered syntax of “we are the principal / animal” [11], or “By March I’ll have gained 2 pounds / in uterine muscle” [108], or “Poppies that fade as bright as that / rubbing plastic beads against your teeth” [24]). 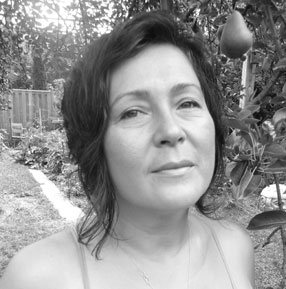 But Nguyen’s philosophy of constant history doesn’t stop at the level of textbook factoids (although her interrupting explanatory notes midway through the book certainly recall such texts). Nguyen also catalogs the “Long low beat of living” (47), that is, the everyday. When she writes in “[Look on the damned lake]” of “the family I was /     ½ conscious of,” we can’t help but recall the understated references to her pregnancies, young sons, and partner throughout Red Juice.

Perhaps the oddest thing about these personal references is their failure to become sentimental or excessively self-centered, a product of the fact that each of Nguyen’s poems has so much going on—family, ancient history, contemporary reference, cut-up deconstruction, dangling phrases, playful punctuation, meditations on the act of the poem itself—that there’s simply no time for treacly phrasing.

Indeed, Nguyen never indicates that her poetry, or poetry in general, should bear the emotional weight of the world, as some more traditional poets might. Instead she refers to herself as a “Maker-of-useless-things” (228) and challenges conventional formats, as in the poem “Ode,” where she wonders, “What kind of ode is this?” (171).

As fascinating as reading and untangling hidden meanings and recurring threads in Red Juice may be, however, one cannot neglect the overriding fact that these poems appeal on a basic, visceral level. While close reading certainly helps in decoding Nguyen’s intentions, it’s useful to acknowledge that there’s something about Nguyen’s wording, her careful spacing and sense of form, that elicits atmosphere or emotion without stating such feelings directly.

The most accessible example of such intuited reactions is probably the humor to be found in Red Juice. Though the book doesn’t shy away from weighty matter—the latter years of poetry emphasize environmental degradation and the “catastrophic global disruptions” (183) of climate change—its juxtaposition of the absurd with such excerpts makes odd comedy a central part of the poetry.

Whether the lines are simply phrased silly (“I’m aiming my mouth / for apple pie” [5]) or tie into Nguyen’s broader project of messing with history (“I want a large ass / like the large-assed women / the ancients drew / on certain cave walls in the Pyrenees” [110]), they surprise, pleasantly. The poet seems intent on deconstructing the familiar, from language itself to the commercial images we’ve come to adopt as neo-language; consider

The Starbucks mermaid logo
has lost her nipples (202)

or the Land o’ Lakes-inspired of “Box of Butter”:

Nguyen’s spare font choice and lack of punctuation are at odds with the playful tone of such lines, so the humor ambushes. One can never be sure how serious Nguyen is (could the commercial images, linked to nipples and breasts, be a commentary on the exploitation of women’s bodies to sell coffee and butter? Or are they just funny advertising flukes?), which seems precisely what works best in her poetry.

Red Juice is not the Kool-Aid of the canon—though Nguyen constructs her own canon by citing such poets as Notley, Mayer, Dorn, Myles, and Denby in her subtitles. It’s a history book rewritten, moments collected like so many pennies plucked from the ground—coincidentally by ascending year—with Nguyen the one to parse them into copper arcs.

is an undergraduate at the University of Pennsylvania majoring in English with a concentration in Creative Writing. Her work has appeared in The Pocket Guide, the Philos Adelphos Irrealis chapbook, and McSweeney’s Internet Tendency. She is an editorial assistant for Jacket2, the editor of the Penn Art & Culture blog, the managing editor for Penn’s Filament magazine, and an enthusiastic employee of the Kelly Writers House.