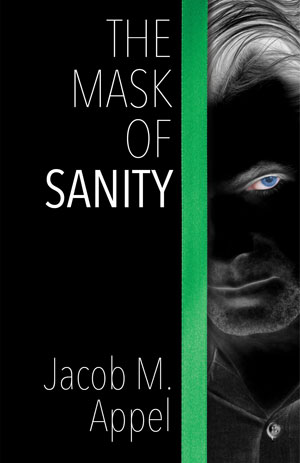 THE MASK OF SANITY
by Jacob Appel
The Permament Press, 256 pages

The protagonist of Jacob Appel’s 2017 novel, The Mask of Sanity, is a doctor, a family man, and a murderer. Appel offers a rare insight into the life of this high functioning sociopath, Dr. Jeremy Balint. With a staggering seven master’s degrees, medical degree, law degree, and experience in clinical psychiatry, Appel is certainly authority enough to paint a convincing psychological profile of such a troubling protagonist. The close third person narration allows the reader to hear Balint’s twisted thoughts, while also observing and nearly falling victim to the carefully constructed facade of “the most ethical human being on the planet.”

Balint, in fact, appears to have a perfect life. After overcoming a difficult childhood, he becomes a successful cardiologist, marries a smart, beautiful woman, buys a house with a pool, and has two daughters who he adores. Living this beautiful life, Balint is tormented by the thought that it might not last. And it won’t, of course. He soon discovers that his wife is having an affair with a notoriously slippery colleague, Warren Sugarman. It quickly becomes apparent that Sugarman, a womanizing egomaniac, is sleeping with many women including Balint’s wife while neglecting his own ill-adjusted son. Balint reasons that the most important thing he can do is keep his domestic life intact. And so, as Appel writes, he “decides to murder his former friend and classmate.”

The reader becomes less sypathetic to Sugarman’s plight throughout the novel as he continues to schedule outings and dinners with both Balint and his wife, coaxing her to fall deeper in love with him as Balint watches and plays dumb to the affair. These particular scenes are made even more horrible by the fact that Balint’s wife appears to be geniunly in love with this clearly manipulative man. The sickening progression of this affair almost allows the reader to understand Balint’s fantasy of ending Sugarman’s life, despite his admitting at the start of the novel that “the real reason he was going to eliminate [his wife’s] lover was simply that he had decided he was going to do so–nothing more, nothing less.” Balint spends the rest of the novel spinning elaborate justifications for his actions, generally revolving around his two young daughters. This becomes a distinct pattern for his character. Everything is always justified around his subjective interpretation of morality and human worth. 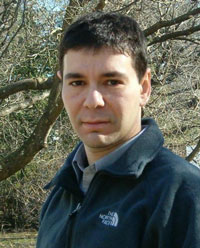 Balint tries to convince the reader that his daughters “matter above all else: his ultimate legacy, the guardians of his image after his death,” and that he is committed to maintaining the ideal home environment he and his wife had spent a decade building for them. The strength of this argument is lessened by his wife, who shows no intention of leaving them and continues to prioritize her family over Sugarman, conducting the affair silently in her free time. Still, any sympathy that this justification may have ilicited is quickly erased when Balint decides “that his plan require[s] multiple victims.” In order to cover up this well motivated killing, Balint decides to murder five other random people, and signify his actions by tying an emerald ribbon around each of their necks. For each murder, he provides several reasons why he acted justly, but he also becomes more and more obsessed with his public image as “The Emerald Choker” and actually begins to enjoy the killing itself. Throughout this process, Balint wins awards for ethics in medicine, “given to a clinician who has mastered the art of ethical decision making,” promotes a charity organization through his synagogue, and climbs up the rankings at the hospital where he works, effectively subverting readers’ stereotypical expectations for serial killers as social outcasts.

Balint is an intriguing character, but the narration limits the reader’s interpretation by providing what is practically a diagnosis for his condition before the novel begins. The book’s introduction argues that sociopaths are not usually iconoclasts or pariahs as we imagine. Instead, they are “all around us, smiling and perpetrating evil.” This is a fresh picture of sociopaths, people who “recognize the difference [between right and wrong], but simply do not care” and are not capable of developing that care. After this introduction, the reader is thrust directly into the narrative with the first line: “Killing, Balint discovered, was the easy part.” This leaves little doubt that Balint is a sociopath, essentially removing any possibility for redemption, limiting any questions or hopes that the reader might have and thereby sacrificing an opportunity for suspenseful ambiguity. Balint himself even considers the possibility of his condition, but decides that “whether he actually was a sociopath…was not worth thinking about.” Likewise, the reader is spared having to come to his or her own conclusion.

Nevertheless, the novel is haunted by the eerie paradox of having a killer who is also a doctor, a criminal who is also a hero. Appel continually exploits the one essential similarity between these two roles. Both doctors and murderers believe that they have the right to determine the fate of others. Balint is part of a committee who decides which patients receive heart transplants and which do not, deciding in essence who will live and who will die. This is a surprisingly unscientific process. His occupation’s assumed right to play God cultivates the ego and confidence necessary for his killing. To Balint, “life is like a game of chess that people play with God. And as long as you’re winning, God lets you stay down here on Earth. But when God wins, that’s when He takes you.” In this case, Balint is God. The book flashes between Balint sitting in on the transplant committee, and Balint roaming the streets searching for victims. These moments begin to feel strangely similar. In both cases, the parties involved try to justify their decisions, but the justifications never really feel right. One can’t justify murdering a young boy because he is fat and will in the future be bullied, just as one can’t comfortably deny life to a father because he has high cholesteral or used to smoke.

The novel concludes suddenly, leaving the reader with a pressing question. Throughout, the reader is led to believe that Balint never comes close to being discovered as a killer, but the unexpected last page may indicate otherwise. What went wrong? No clear foreshadowing seems to provide the reader with an answer to this question, resulting in a somewhat unsatisfying finish. The reader inevitably curses the author for not providing the answer somewhere between the lines earlier in the text, but only because the author has succeeded in shocking and engaging her.

The Mask of Sanity offers a new image of sociopaths and criminals while reminding readers that the same God complex often driving them is present in people we admire. Some of those people we call heros. That concept in itself may cause readers to second guess their neighbors, friends, maybe even spouses, providing a delightful fear that speaks to Appel’s accomplishment as a writer.