THE STRANGERS AMONG US
by Caroline Picard
Astrophil Press, 84 pages

reviewed by Jordan A. Rothacker

Dog people and cat people often like to stake their identities on the idea that they are starkly different from one another, but are they really so different? Regardless of species, a pet’s companion is a certain type of person who probably prefers their dog or cat to other people. In two recent books, by Eileen Myles and Caroline Picard, a dog person and a cat person, respectively, confess the closeness they feel to their pets while also marveling at the strangeness of intimacy with another kind of being. Reading both of these books together becomes a chance to deeply explore the intimate otherness of animal companionship. They live amongst us, but are they with us?

Myles has become a bit of a public figure recently with appearances in the Amazon original program, Transparent, a show that also features their (Myles’ preferred pronoun) poetry. With this new book, Afterglow (Grove/Atlantic, 2017), Myles is as provocative as ever. The subtitle of Afterglow is “a dog memoir” and in it Myles focuses on Rosie, a pit bull who was Myles’ closest companion from 1990 to 2006. The twenty chapters feature the poetic prose we’ve come to expect from Myles’ narrative work but they have a wide range: a mysterious letter from Rosie’s lawyer; a lecture on the etymology of the name Aphrodite; the script of a puppet talk show where Rosie is interviewed; scenes of Myles’ family in Ireland; and even a chapter of direct address from Rosie herself. Images are interspersed to punctuate the prose and add another element to the kaleidoscope of Afterglow. It is a book playfully conscious of being a book and joyfully weaves the reader into its fabric. 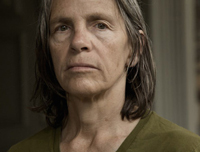 For Myles, Rosie is the ultimate other. Frequently they use the word “dog” in place of the word “god,” and Myles explains this in the third chapter, “My Dog/My God.” In the last year of Rosie’s life she started having mysterious fits that led to uncontrolled urination. “One evening I was feeling a little extra naked after describing the ritual of mopping her piss and I thought that’s it. She’s god. And I felt so calm. I’ve found god now. My God—My Dog,” Myles writes. Later in this chapter they explain, “In fact I’m writing this book to keep talking to her.” And Myles does talk to her and even for her and through her, wrestling with where the individual identity of Rosie exists separate from Myles’ own. At the end of a chapter, “Goodnight Sweet Queen,” in which Myles catalogs all of Rosie’s belongings left after Rosie is put down, Myles writes directly to Rosie, “I suppose I could’ve imagined you loved me then but I only knew you loved me because I saw you in my way and I was listening. And you simply were. I loved you for that. For being who else was in my life no matter what.” Rosie is the ultimate other and she is also just other.

Eileen Myles wanted a dog as a child but was denied by her parents (other than one night with a puppy which was returned the next day after whining all night). Struggling with identity as a child, between a male and female sibling, Myles describes the situation and where a dog would fit: “this inbetweenness, this aloneness, hear it now, is holy. I begged my parents for an animal to be an army with me.” God, place-holder, comrade-at-arms, even reincarnation of they’re father, Myles admits, “all of Rosie was a meeting place.”

“The writer spends her life reducing her own existence to that of a ghost,” Rosie tells Eileen in a late chapter called, “A Dog’s Journey,” told solely from the point of view of Rosie seven years after her death. Afterglow is a dog memoir, and it is a dog’s memoir, and yet it is all Myles taking responsibility for the otherness of Rosie. 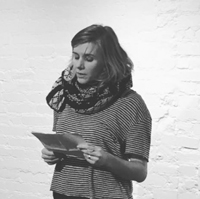 Picard’s The Strangers Among Us (Astrophil Press, 2017) is a slimmer book, more of a long essay. She provides a very different contemplative approach that turns out to be a perfect pairing with Myles’ visceral language. Her cat/human relationship helps us understand Myles’ dog/human relationship and vice versa. Picard is a visual artist, curator, writer, and co-director of non-profit publishing house and art producer, The Green Lantern Press. In The Strangers Among Us Picard contemplates her cat, Little Grey, who at the point of writing, Picard had been cohabitating with for nine years. Little Grey likes to stare at Picard while knocking over glasses of water before scampering away. Is this humor, intentional rebellion, or a random action with no meaning? To answer this, the author begins by looking at Leopold Bloom’s first chapter in James Joyce’s Ulysses where Bloom converses with his cat. He ponders how the cat sees him and “conceives the faintest glimmer of himself in her eyes and, not surprisingly, the result is unnerving.”

Picard then connects this with Jacque Derrida’s work, The Animal That Therefore I Am, and how “naked” Derrida feels when seen by his cat. This seems to be the same nakedness that Myles feels when she describes her ritual of cleaning up Rosie’s urine. In engaging an other as extreme as being from another species but as intimate as a house pet can be, we experience a depth of nakedness in that reflexive interaction. Derrida also asks, “cannot this cat also be, deep within her eyes, my primary mirror?”

The eyes of this other for Derrida, this “bottomless gaze” as he calls it, offers to his sight “the abysmal limit of the human.” However for Picard this realization and connection has benefits towards greater intimacy. She tells us, “By admitting one cat, we feel a greater throng of others. We must acknowledge the strange porous bounds of out own selves.”

Picard skews to the academic while Myles to the emotional, but both are philosophical. They investigate how we live our lives with an animal in our space, participating in communication and communion. Both love their respective pet and both devote much of their inquiry to how much that love is reciprocated. For all of their differences—style, species, method of inquiry—they both come down to the same observation that could be simply conveyed as: this is kind of weird, right? It is that mystery of the intimate other that electrically charges both books. For a non-animal person the mystery of this mystery might make for a fascinating read into a world and set of relations that is totally alien. For an animal person, be it cat or be it dog (and I guess we could open the distinction up to other more exotic species), Afterglow and The Strangers Among Us give words for the something we have all felt nuzzling against us. 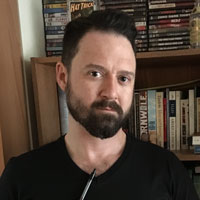 IMAGINE WANTING ONLY THIS, a graphic novel by Kristen Radtke, reviewed by Jenny Blair