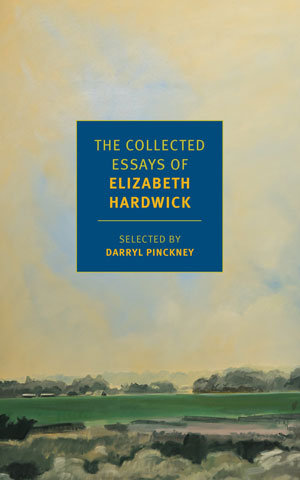 Reviewing Elizabeth Hardwick’s new collection of essays is a task to strike fear into the heart of even the most headstrong literary critic. Biographer of Melville, co-founder of the New York Review of Books, and noted sharp tongue, Elizabeth Hardwick cast a long shadow in the literary world of the twentieth century. Darryl Pinckney introduces Hardwick in this volume as a New York intellectual firebrand, an avant-garde thinker with an acerbic writing style, and a cutting, devastatingly smart critic who employed a withering gaze.

Would-be reviewers, if not scared off by Hardwick’s biography, will encounter an essay in the book’s first hundred pages, “The Decline of Book Reviewing,” which is destined to have some effect on their confidence. If reading that piece is not sufficient, the reviewer will then bump into a piece on a Hemingway biography that begins, “Carlos Baker’s biography of Ernest Hemingway is bad news.” To be blunt, Hardwick, a writer of fiction herself in addition to criticism and biography, does not go easy on writers.

The task of reviewing her new collection, once sufficiently convinced of my own opinions, is still not an easy one. The collection covers fifty years of writing, from 1953 to 2003, and while its only real foray into a topic other than literature is a group of essays on key moments in the Civil Rights movement and the Chicago Democratic Convention of 1968, Hardwick still manages to touch on a great many subjects. Boston, Henry James, the state of New York and Washington, DC in the 1960s, overlooked novelists, overrated novelists, and many other novelists in-between.

The collection begins with Hardwick’s writings from the 1950s, essays that feel so old-fashioned it’s hard to believe they’re less than a century old. Wordy, overly complex, and a bit pretentious (frequent use of the “royal we”), Hardwick’s prose style in these pieces combines with rather stuffy, traditional content to create something nearly Victorian. In an early piece on the letters of Sherwood Anderson, Edna Millay, and Hart Crane, she writes:

Many people believe letters the most personal and revealing form of communication. In them we expect to find the charmer at his nap, slumped, open-mouthed, profoundly himself without thought for appearances. Yet, this is not quite true. Letters are above all useful as a means of expressing the ideal self; and no other method of communication is quite so good for this purpose.

Hardwick’s writing in these first pages, though at times dry, shows a wily intellect and a certain creativity in word choice and sentence form that will blossom in later decades. As I read on, I found it difficult to put down a book that, in its earlier pages, I had had trouble forcing myself to pick up.

One of the bizarre pleasures of reading this collection of essays is the sheer sense of time it evokes. Tracking Hardwick’s content, and voice, through the second half of the twentieth century is an oddly satisfying task. To read her early essays on Boston or George Eliot, and later arrive at her essays on Joan Didion and Truman Capote that take on the lucid style and deadpan endings favored in our era of journalism and criticism (the last line of her essay on Didion: “She is saying that Bellevue Avenue in Newport is not what the west was won for.” Even a preposition at the end of the sentence!), is breathtaking. It is like watching history on fast-forward. And while this is a slippery term, Hardwick is an illuminative, at times perhaps great, writer. What do I mean by this? Simply that each essay brings a new epiphany, a new moment of strangeness. Mayor Daley’s institution of a police state during the 1968 Chicago Democratic Convention is “a mode always available to the mood of tyranny.” On New York she writes, “Making a living is nothing; the great difficulty is making a point.” The crowd at a rock concert becomes a “huge clot of dazed swayings, fatuous smilings, empty nightmares.” And her writing champions a slow approach. Certain sentences and paragraphs merit re-reading and can stand up to prolonged inspection. The essay on Didion opens:

Joan Didion’s novels are a carefully designed frieze of the fracture and splinter in her characters’ comprehension of the world. To design a structure for the fadings and erasures of experience is an aesthetic challenge she tries to meet in a striking manner: the placement of sentences on the page, abrupt closures rather like hanging up the phone without notice, and an ear for rhythms and tags of current speech that is altogether remarkable.

While her writing may not always be the pinnacle of clear, straight-forward prose, it is something to behold in itself, especially as, in the later essays some of the anachronisms (using “he” when talking abstractly about a person, eschewing more “feminine” writers, etc.) disappear and her tone becomes more immediate. It is also delightful to see her sharp wit poke through the calm facade of an essay, which happens when she describes the disconnect between protesters and those in power during the Chicago Democratic Convention of 1968. “There is a pathos and humor in all this, like a dinosaur choking on bubble gum. A fearful gap, not only in generations, but in common sense, in ordinary understanding of the world about us, has opened up. And how can we face this, except with dread?”

As you read through the decades, Hardwick also seems to become a more humanistic writer, and, if not a more optimistic one, than at least a more nuanced one. There are fewer screeds along the lines of “The Decline of Book Reviewing” and more pieces that investigate and try to capture something unique in a writer or a cultural moment. Simply put, as she continued writing, it seemed as if Hardwick became less interested in seeming smart and more interested in writing thoughtful, emotionally intelligent pieces that smart people might like to read. Part of this change seems to coincide with an increased sensitivity to specificity. Her interest shifts from “Art” to the people who make it, the cities where they live, the people who read it. These pieces are not theses but thoughtful asides and anecdotes, musings from the mind of a deeply intelligent and thoughtful writer.

Even in her later pieces, though, Hardwick is a fairly traditional critic. It’s hard to believe that Hardwick was writing about Ernest Hemingway, Bartleby the Scrivener, and William Faulkner in the same city at the same time as Susan Sontag was writing about the phenomenon of camp, contemporary art, and the French New Wave. The trend continues into the latter years of the century. One of Hardwick’s essays from 1999 on the landscapes of fiction starts with Wuthering Heights then moves on to Nathaniel Hawthorne and Charles Dickens, dips its toe into the twentieth century with The Great Gatsby, mentions, in one sentence, the 1987 novel The Bonfire of the Vanities by Tom Wolfe, and then settles back into Edith Wharton and Theodore Dreiser. Hardwick is not a critic who is overly interested in the new, and in some ways that makes her a strange character, perhaps closer to an academic.

Critics as, however you slice it, arbiters of taste, occupy a complicated space in the artistic world of today. In a vision of the arts as more inclusive, as well as more expansive, it’s unclear what role critics will play in this future. And yet, out of this chimera—half novelist, half journalist, feeding off the scraps of “high art”—occasionally comes something beautiful and insightful, something that is worthwhile not because it is necessarily “correct” about a work, but because it reminds us how vital art can be to people. Hardwick was dedicated to this idea, and her life’s work was proving that writing about art could be, in itself, a kind of art. In “The Decline of Book Reviewing,” she notes, “Book reviewing is a form of writing.” And in that simple sentence there is a manifesto.

Hardwick was a unique critic and writer because she treated the task of reviewing a book, or writing about themes in literature or culture, as an undertaking worthy of her full attention. Perhaps the best proof of this attitude is her language. Hardwick brings a linguistic verve and creativity to her essays rarely seen in non-fiction writing. Words are created, or used in ways that bend their meaning (the concert crowd, for example, as “a huge clot of dazed swayings”), and in the great American tradition, her highfalutin prose is occasionally peppered with a dash of slang or casual usage (The word “gossipy” and the phrase “vicious, villainous, vituperative,” both appear in the first sentence of an essay on Truman Capote). She was, as Darryl Pinckney mentions in the introduction, “what used to be called a writer’s writer,” but not because she was exclusionary. She simply cared more than most people about the power of language, and she wasn’t about to apologize for that.