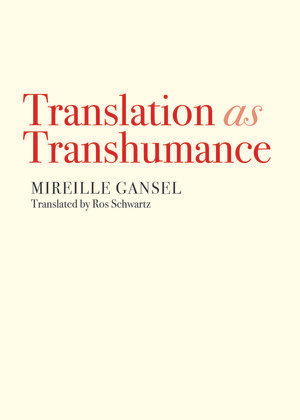 TRANSLATION AS TRANSHUMANCE
by Mireille Gansel
translated from the French by Ros Schwartz
Feminist Press at CUNY, 112 pages

For Mireille Gansel, the work of translation is an all-consuming task. Before embarking on a project, Gansel first immerses herself in the world of the poet she is translating. She studies the historical context of their writing as well as the personal context. Wherever possible, she engages with their physical environment: she visits their home, observes their writing space. And, ideally, she listens to the poet read their work aloud. Attempting to translate a single German word, “sensible,” in a poem by Reiner Kunze, Gansel travels from West to East Germany to “[listen] to the poet read, alert to his intonations and facial expressions. In the tiny blue kitchen, I was conscious of his precarious everyday life.” She imagines the letters from friends in exile that he’ll never receive, and the mingling of his two languages, a German abstracted by Nazism and a Czech repressed by war, both of which survive in the poetry of his contemporaries, in songs from his childhood. Here, in this intersection of past and present, Gansel finds the word for “sensible”: fragile.

In her book-length essay, Translation as Transhumance, Gansel describes employing this practice of immersion for her translations of Bertolt Brecht, Peter Huchel, Xuan Dieu, and, most famously, the complete works of Nelly Sachs and her correspondence with Paul Celan. Gansel divides the book into short chapters, poetic meditations on a particular place or poet, which document her travels and her revelations about translation: Translation is the “essence of hospitality.” It is “a hand reaching from one shore to another where there is no bridge.” It can be understood “both as risk-taking and as continual re-examination,” the translator’s work fluid, changing as word-meanings morph through time, and even as the translator herself changes. Gansel inserts original German and Vietnamese poetry throughout and explains how she comes to each translation, what each taught her, in a word-level analysis that will speak to any student of translation or of poetry.

The book’s title, which is the same in both English and French, refers to a shepherd’s job: “transhumance” is the long, slow movement of flocks across plains and valleys as they search for greener land by way of ancient routes. It is “the slow and patient crossing of countries, all borders eradicated.” At a time in which words are losing their meanings and border walls are once again growing tall, Gansel illustrates for her reader the difficult work of border crossing. 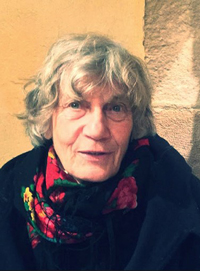 After working on her German translations, Gansel travels to Vietnam, where she lives for several years, learning Vietnamese in order to translate an anthology of poetry to protest threats of American intervention. To fully understand the music of the language, she learns to play the monochord, which she calls the soul of Vietnamese poetry, and to understand the poetry of a dying mountain people, she spends time in their raised bamboo houses, sharing their rice. She learns to consider, alongside a word’s literal translation, “the implicit allusions of an entire social imaginary.” She gives, as an example, the word duyen, which literally means “attachment,” but could be translated as “love sworn for eternity,” “bond of the soul,” “nuptials,” or “fate,” and references a wildly popular eighteenth-century epic. The one word cannot be translated as just one word.

Back in Europe, translating Nelly Sachs, because Gansel can’t speak to her, she travels to Stockholm and pours through the German-language Bible that Sachs was reading as she wrote, trying to understand the ancient Hebrew rhythm that Sachs absorbed and infused into her poetry. She decides that “from now on translation would mean taking syntactical and semantic risks” and begins employing extended compounds like “the ones standing-with-you-in-the-light!” Over the course of the book, she arrives at one lesson after another, in one country after the next.

Of course, this type of total immersion isn’t available to most working translators. Translations as Transhumance is certainly less a how-to than a memoir that lets the reader in on Gansel’s process. For her, that immersion becomes necessary because of the particular contexts of her work: in each case, Gansel grapples with the colonization of language. For example, in translating Vietnamese poetry into French, the language of the country’s colonizer, she must be careful to avoid “the French tradition of translation that favored an exotic approach,” which, as her translation partner put it, “arouses simply a sense of foreignness, without being able to communicate the emotions.” Similarly, in translating Brecht, she is acutely aware of German as the language of oppression, and she attempts to capture the playwright’s reappropriation of a Nazified German in his work. Languages, she finds, exist both within and outside of their colonization. In addition to being the language of the oppressors, for people like Gansel’s elderly relatives, German is the language of family. Their German is accented with the languages of neighboring countries, “punctuated by exiles and passed down through generations… This is the German that has no land or borders. An interior language.”

Often, Gansel refers back to this idea, what she refers to as the interior or soul language, which exists without a home, a sort of mystical truth-meaning that must be captured by the translator in mere words: “translation came to mean learning to listen to the silences between lines, to the underground springs of a people’s hinterland.” As her mentor in Vietnam, Nguyen Khac Vien, writes, “Staying faithful means first and foremost seeking to recreate the work’s humanity, its universality,” and liberating language from exoticism and appropriation. This is a poetic and engaging directive, if nebulous. It gestures towards the poet’s work of infusing small words with great and inexpressible Truth, as they exist both in and beyond their context.

But more concretely, in pursuing this goal Gansel aligns herself with a particular strand of translation theory. On one end of the spectrum is a practice that prizes word-for-word or phrase-for-phrase translation and even grammatical fidelity. Meanwhile, those on the other end of the spectrum focus on the meaning of the original text, accounting for the cultures of the two languages and valuing a translation that has the same effect on a reader as the original. Gansel falls definitively on the latter end of the spectrum, claiming in another essay: “There are fidelities that are worse than betrayals.” Instead, she mines culture in order to communicate a poet’s larger ideas and references, risking “going beyond the literal meanings of the words, in order to access their deeper meanings.” When Gansel speaks of a language of the soul, what she really means is: Put the dictionary aside, for a moment. Immerse yourself in the world of the poet, and their words will unfurl to their full size and meaning. Language is limiting, so let us engage it with all the tools at our disposal. With thoroughness, with humanity, with love, communication is possible.

One cannot read these meditations without remembering that Translation as Transhumance is itself a work in translation. For this reason, I wished more than once for a translator’s note. What is translator Ros Schwartz’s theory of translation? Did Schwartz visit Gansel’s desk? Did Gansel read portions of the book aloud to her, press her tongue to her teeth and bring the words to life? Gansel includes poems in German and Vietnamese, as previously mentioned, which we see translated into English. If we are to read pages about translating a single word, we must know if the English version comes from the French translation Gansel made, or from the original, or through an intermediary. Schwartz is a prolific and award-winning translator of French into English who has written and spoken widely. I would have relished a few words from her on this meta-project.

The success of Translation as Transhumance lies, finally, in the quality of this translated prose. Because we can’t actually read the final products of Gansel’s work, we depend on her descriptions of success, which tend to result in a lesson for the translator. By using a lyric voice that leads the reader from memory to theory and back again, our author (mostly) avoids moralizing and instead illuminates a fascinating and earnest process. In the final pages, Gansel comes to one more realization:

[A]s I sat at the ancient table beneath the blackened beams, it suddenly dawned on me that the stranger was not the other, it was me. I was the one who had everything to learn, everything to understand, from the other.

This excerpt perhaps best explains Gansel’s obsessive commitment to research and immersion. She is trying to decenter herself. The language of another’s soul is accessible once hubris gives way to empathy. And so, with slow and patient work, the borders can be crossed.