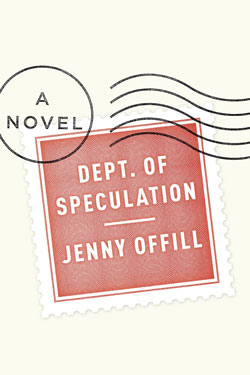 DEPT. OF SPECULATION
by Jenny Offill
Alfred A. Knopf, 177 pages

Here’s an idea for a book party. Hold it in the Guggenheim. Set up an exhibit of all the pages of the book. Frame each page and display them in sequence, ending at the bottom of the ramp. Enlarge the pages 10X the size of the Borzoi Book edition pages, because the first line of the book is “Antelopes have 10X vision, you said” but also so that it’s possible for many viewers to be reading a single page. Hope for crowds. Leave the walls behind the framed pages white, to call attention to the writer’s use of white space as well as the visual appeal of the blocks of text in this accomplished second novel. See if anyone at the bottom of the ramp wonders if the experience of the novel is like what could happen if, say, Rothko had created a series of paintings to be viewed sequentially and that expressed an artist’s emotionally fraught love story. Or maybe if Terrence Malick created an exhibit of still photographs that told a similar story.

The passages that make up Jenny Offill’s 46 brief chapters in her new novel are visually and tonally striking. Still, the astonishing emotional pitch and compositional elegance of Jenny Offill’s Dept. of Speculation snuck up on me. Sure, block paragraph after block paragraph is beautifully crafted. The writing is always sharp, crisp, careful. But her chosen subject matter is risky in its seeming self-absorption. Struggling writers beware: you may not appreciate following the woes of a Brooklyn writer who seems to have a nice enough position teaching writing, a kind husband, a healthy daughter, good friends, a sister who looks out for her, an agent in the wings awaiting her new manuscript, and lots of time to do yoga. What’s she whinging about? 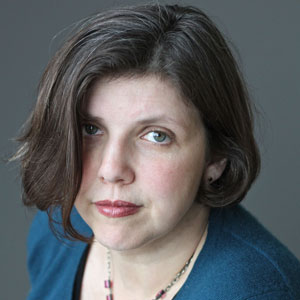 That’s not to say that our protagonist doesn’t have her challenges. Her story is one of wanting first of all to become an “art monster,” then falling in love. The story line is then fairly simple. She gets married. She has a child. Her husband cheats on her with a much younger woman. Rage. Rage. Rage. Then, finally: a repairing of the marriage, while still being able to be an art monster. What makes this novel so satisfying?

For me, Jenny Offill has created something that feels only possible in language—it truly is a work of written art. She writes a consciousness into being. Here she builds character a little the way David Markson did in his wonderful novel, Wittgenstein’s Mistress. Our narrator calls out to Berryman and Rilke, and we begin to know what it’s like to see the world as she does. Sometimes I felt I was too close up to this consciousness—remember the Antelopes with their 10X vision of the novel’s first sentence. We seem to be looking through a microscope at the narrator’s thoughts. “Memories are microscopic,” the narrator tells us. She can be tender as well. Of her baby: “That swirl of hair on the back of her head. We must have taken a thousand pictures of it.” On falling in love: “I learned you were fearless about the weather. You wanted to walk around the city, come rain come snow come sleet, recording things. I bought a warmer coat with many ingenious pockets. You put your hands in all of them.” Joan Didion said in a Paris Review interview that writing is a hostile act because the writer is pulling the reader into the writer’s dreams. As Didion puts it, “Well, nobody wants to hear about someone else’s dream, good or bad; nobody wants to walk around with it. The writer is always tricking the reader into listening to the dream.” Offill tricks us; we’re there.

I’m glad I stayed. The narrator instructs us in point of view: “It’s important to note the POV switch here.” Offill uses point of view to a beautiful end. It’s not just technique; it’s story. Point of view perfectly communicates the narrator’s dissociation when her marriage is in crisis. Style and point of view, like a camera, reproduce the narrator’s shifts in mindset, perhaps the way the French doctor Hippolyte Baraduc in 1887 in the narrator’s telling “found that the same emotion would make the same kind of impression upon the photographic plate, but that different emotions produced different images. Anger looked like fireworks. Love was an indistinct blur.”

Didion has written of seeing pictures that for her have a shimmer. “You can’t think too much about these pictures that shimmer,” she says. “You just lie low and let them develop. You stay quiet.” She writes of the pictures having a grammar. She says that with her novel Play It As It Lays, she wanted “to write a novel so elliptical and fast that it would be over before you noticed it, a novel so fast that it would scarcely exist on the page at all.” It’s my feeling that Didion, writing about her craft, cuts close to what Offill achieves. Even if the surface details—the biography in miniatures—make us restless and impatient with the privileged narrator who doesn’t grasp how good she has it and seems to have little interest about much that’s going on in the larger world around her, the story transcends its smallness with its truths. Not only is the book filled with white space, it also has an emotional core. I think Offill does more than create an enclosed world that is beautiful in the way of a snow globe. Through its artistry, the novel got me thinking about how and why a self closes off and opens up to the world.