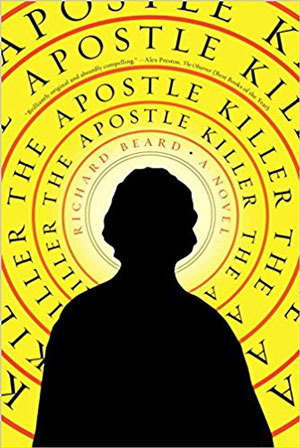 Jesus is the enemy in The Apostle Killer: a socialist anti-establishment religious extremist. In the novel, Richard Beard creates a world that melds both the superstitious past, in which a self-described Messiah could amass a frighteningly large following, and the skeptical present that labels such men religious extremists and terrorists. “With Jesus, the trickery is without end. If he feigned his death he was extending a pattern that started with the miracles because what you see, with Jesus, is rarely what you get.”

The protagonist, Cassius Gallio, is a counterinsurgency agent, a “Speculator” tasked with stamping out superstition and political threats to Rome’s control over Jerusalem. As a young man, Gallio found himself assigned to disprove Jesus’s miraculous resurrection and quickly became embroiled in a twisted web of uncertainty and dangerous machinations. A series of dead-ends and Judas’s suicide (which Gallio is convinced was a hit performed on Jesus’s orders) results in Gallio being sent to Moldova in career exile. After his old partner Valeria, now a major mover-and-shaker in Rome, reopens the case against Jesus, Gallio returns to Jerusalem to prove once and for all that Jesus’s resurrection was a scam. Richard Beard is no stranger to religious fiction: similar to The Apostle Killer, his novel Lazarus is Dead approaches a core Christian myth and reimagines it, attempting to depict the life of Lazarus and his lifelong relationship with Jesus. The Apostle Killer marks a shift in Beard’s stylistic focus. While many of his early novels could be described best as literary or realistic fiction, this novel is squarely detective fiction.

Beard doesn’t skimp on the old-world gore as each Apostle meets his demise in increasingly brutal ways (Philip has a rope threaded through his hamstrings and is crucified upside-down, and Simon is sawn in half with a chainsaw). The novel is framed around each of these violent deaths; each chapter’s title consists of the apostle’s name and how he met his end: Chapter One is “Judas ‘burst asunder,’” for example, and Chapter Eight is “Bartholomew ‘skinned alive.’” This technique ensured that this reader began each chapter with a degree of trepidation, eager to see how each apostle met his horrific end, but also mildly disturbed by Beard’s graphic depictions of gore and violence.

The setting of The Apostle Killer manages to evoke both ancient Damascus and Jerusalem and the modern Middle East, blending CCTV, air travel, and cell phones with horse drawn carts and the Roman Circus. While surveying his surroundings upon his return to Jerusalem, Gallio thinks, “Car bomb…a sign of the times. The leaves are back on the trees so the blast happened at least a year ago, but in Jerusalem past and present coexist. Possibly the future too.” 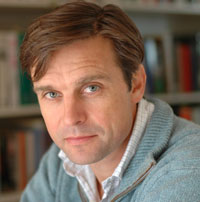 Beard’s writing elevates this conventional plot however. His clipped sentences and blunt observational narration feels hardened by age and regret. The tight prose remains engaging even through the center of the novel when the plot begins to lose steam, ensuring that the reader won’t lose to much interest. The unusual depiction of Jesus proves to be The Apostle Killer’s strongest asset. Throughout the novel, Gallio ruminates on the strangely slippery nature of Jesus, how despite having an intimate knowledge of Him he can’t remember what he truly looked like: “when the face is moving, it is him, recognizably a cult leader with a fanatical following. On pause, however, the stilled image never accurately captures the living individual Gallio would recognize.” Beard returns to the idea of Jesus being unrecognizable many times throughout his novel: Gallio is unable to adequately recall his face for an APB, so he uses an apostle’s likeness instead (since they all looked basically the same). Every person asked to describe Jesus remembers him looking differently, and somehow every famous painting depicting Jesus is just as accurate and just as unique as the next.

While the individual beats of the story don’t fall flat, they often feel formulaic. In many ways, The Apostle Killer is a fairly straightforward crime thriller, elevated by strong writing and a unique plot. Cassius Gallio is the hard-bitten investigator exhausted and washed up from a decade of exile; his marriage has failed and his ex-wife and daughter now live with one of his old colleagues; he struggles with his lust for his younger female partner. Gallio’s affair with said partner (who is married with two children) often felt less like an integral part of The Apostle Killer’s story and more like something Beard included because detective novels almost always have immoral affairs.

The handling of Jesus and the depiction of Christianity as a dangerous and unsettling cult that only over time has been shaped into something that is palatable and has mass appeal is The Apostle Killer’s most effective idea. The novel is otherwise a fun and engaging crime thriller and its consistent dips into old-world brutality kept me engaged through the end. While the narrative lull in the middle may run the risk of losing serious fans of crime thrillers, I remained interested and excited until the novel’s mostly satisfying conclusion. 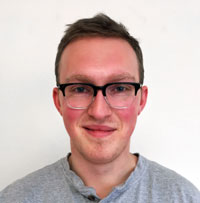 Ansel Shipley is a graduate of SUNY Purchase college with a degree in literature. While there he was the senior literary editor of the student-run art and literature publication Submissions Magazine. He currently lives in Brooklyn where he writes freelance critical reviews and volunteers at Hullabaloo Books.