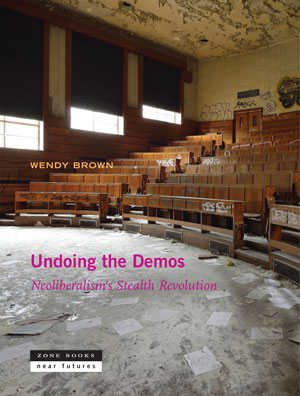 “SEN. KIRK: RE-ELECT RAHM OR CHICAGO COULD END UP LIKE DETROIT,” reads the Chicago Sun-Times headline.

In the ensuing article, Illinois Sen. Mark Kirk argues that the bond market supporting Chicago’s debt respects current mayor Rahm Emanuel over challenger Jesus “Chuy” Garcia. Those of us who care about democracy wonder if democratic self-determination—whether defined minimally as self-rule, or, more robustly, as participating in popular sovereignty—is extinguished when one’s vote is determined by the bond market and its assessments. This is the question U.C. Berkeley Professor Wendy Brown explores in her latest book, Undoing the Demos.

Moody’s does not have a citizen’s concern for public schools, parks, museums, local ecology, or Chicago’s other common institutions. Yet these are the political conditions through which citizens find meaning in their lives. For those of us who care about democracy, the worry is whether the authority of finance capital on our political imagination relegates democratic citizenship to being simply the medium through which the investment market controls public life.

The transmogrification of democratic processes to financial ones, a process Brown calls economization, is not only a concern for cities. We economize souls. When Jay-Z rapped, “I’m not a businessman; I’m a business, man,” in 2005, he conveyed the spirit of his times. Five years later, the US Supreme Court codified this thought into legal precedent. 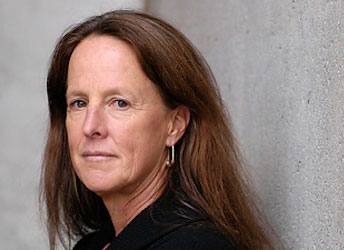 In Undoing the Demos , Wendy Brown details why the Courts’ Citizens’ United decision of 2010 does not commit the oft-cited heresy of treating corporations like people, “but rather, the Court’s decision converts people into corporations. She rehearses how Justice Kennedy conflates citizens’ speech with corporate speech and unmoors citizens’ speech from justice concerns. This move casts off the distinctive political valence of the terms rights, equality, and the state. Kennedy replaces the terms’ political valence with economic valences of the same terms. Citizens’ speech is thereby transported from a political register to an economic one.

By leveling down the distinction between citizen speech and corporate speech, the Citizens’ United verdict turns all speech into a form of capital deployed by economic actors to try to enhance their competitive positions and values. Instead of charging the government with the duty of protecting the fragile voices of citizens and respecting the qualitative difference between speech grounded in political concern and corporate speech calibrated to enhance market positioning, Justice Kennedy construes the government as the illegitimate obstacle to free speech in general. The economization of citizens and their speech makes the equivalence between persons and corporations possible. This leaves Kennedy to argue for protecting free speech as the free barrage of undifferentiated speech in a “marketplace of ideas.”

The Citizens United decision is one of a handful of examples Wendy Brown marshals to demonstrate how neoliberalism in contemporary America—that is, the extension of market principles to all aspects of our lives—transforms the subjects of American democracy into roving bits of human capital. While Jay-Z may be right about being a business, the rapper misinterprets his business as one that hawks CDs or cocaine. Jay-Z’s business, like all of our businesses, is that of selling ourselves as sites for capital investment. Our worth as humans is a matter of how much our capital appears poised to appreciate.

Wendy Brown’s contribution to the literature lies in her demonstration of how contemporary neoliberalism legitimizes political behavior: not by transforming people and political sites into consumables, bought and sold on the market for consumption. Rather—because finance dominates market behavior—contemporary neoliberalism renders people and social formations as sites for either capital investment or divestment to spur capital appreciation. Neoliberalism, like Bill Clinton at a wedding, sucks all of the air out of the room, crowds out other justice concerns, and measures all of our actions, public or private, on the scale of whether the actions appear to attract investors.

In recent US-led adventures in Iraq, the confusion between democracy and neoliberalism is given a transnational form. American Paul Bremer served as the spearhead for administrative efforts to establish democracy after Hussein had been toppled, and as head of the Coalition Provisional Authority, he declared, “Iraq is open for business,” in 2003.

In the name of democracy, Bremer issued a series of orders to sell off hundreds of state-run businesses—to permit full ownership rights of Iraqi businesses to foreign firms with the repatriation of all profits to the foreign firms, to allow foreign ownership and control of Iraqi banks, to eliminate tariffs, to throttle back public goods, and to circumscribe organized labor, outlawing strikes and banning union activity in most sectors. According to Brown, “lest future elected governments not be so pliable, one order declares that no elected Iraqi government will have the power to alter them [Bremer’s orders].” These efforts describe neoliberalizing, rather than democratizing, post-war Iraq.

Neoliberalism as a governing rationality recasts noneconomic spheres as markets in a way that reforms principles, norms, and subjects. Democratic citizens are reformed as human capital, and this burdens every individual person with the responsibility to invest in herself not for the sake of justice or joy, but in order to develop her knowledge, character, and visage to attain the appearance of a good capital investment, each person knowing that the shape of her life depends on how well she manages her own investments, debt, credit rating, and other market metrics calibrated to present herself as a profitable risk. Government stands on this model as just another potential investor, willing and able to disinvest from citizens as soon as the metrics show them to be a bad investments.

“Human freedom” is no longer the opportunity for life long learning for the sake of her humanity, nor the opportunity to participate in collaborative and contestatory decision making. Neoliberal freedom is, in Brown’s terminology, “responsibilized” to freight individuals with the duty to take another test prep class, to “adopt best practices”, to remain, in every way, competitive and attractive in shifting markets.

When divorced from the greater political concerns of economic health, government support for liberal education—in other words, education for free democratic citizens to participate in self governance—is considered an irrational indulgence. To drive these points home, Brown reviews Obama’s 2013 State of the Union address in which economic health provides the normative force grounding such diverse priorities as lowering teen pregnancy rates, slowing climate change, and ending domestic abuse.

Each of these issues is an obstacle to freedom and democracy and could stand on its own as a justice issue, demanding the attention of a careful public. However, neoliberal rationality only legitimizes arguments aimed at capital appreciation: in other words, domestic abuse is bad because it is “bad for business”.

I found that Brown’s most novel arguments concern the ways in which neoliberalism inflects political sacrifice. Neoliberal notions of shared sacrifice in the age of financialization takes the form of austerity. Brown writes, “In the 2008 subprime mortgage crisis, for example, 700 billion taxpayer dollars and over five million homeowners were fed to banks ‘too big to fail.’”

In Chicago’s upcoming April election, an apparent gesture of patriotism calls for offering up Chicago’s poor, ill, and vulnerable to further privation in order to propitiate the fickle God Moody’s, demonstrating the city’s radical dependence on a supreme power—a credit agency, that owes us nothing in return.

Political sacrifice is economized, and according to Sen. Kirk, so is my vote in April.

Irami Osei-Frimpong is a writer living in Chicago. He is the author of two novels and a stack of short stories. He and his wife created Another Chance Productions, a multimedia company that specializes in political programming including “Disciples,” an original workplace drama that explores the political turning points of an active Midwestern Protestant church. He has a background in academic political philosophy, and his scholarship concerns how public institutions train citizens for their lives as free and equal people living interdependently in America. He plays the oboe and loves how his studies inform how he parents his two daughters.