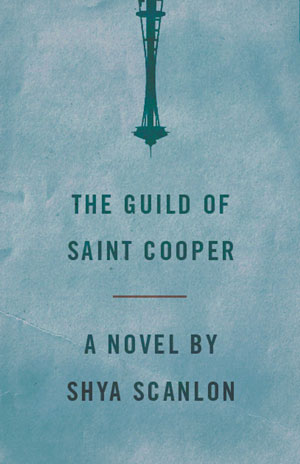 “Spasms of the diaphragm,” the twentieth century theorist Walter Benjamin remarks, “generally offer better chances for thought than spasms of the soul.” And who hasn’t been convinced, softened to a position, by comedy? This is the principle behind Shya Scanlon’s newest novel, The Guild of Saint Cooper, which returns to the self-conscious comedy, and literary meditation, of his first novel, Forecast (2012).

It’s unsurprising that Scanlon has circled back towards laughter after his 2013 novel Border Run—geographically too, from Seattle to Arizona to Seattle—since it is clear he prefers to induce spasms of the diaphragm. But a novel of so much laughter can betray itself. Watching mildly funny Youtube videos with friends in an uproar invites a similar feeling. It’s a dare not to laugh, a dare not to take the laughter sincerely, and thus create an irreparable distance.

The Guild of Saint Cooper begins in waiting, and being “tired of waiting.” Blake Williams, narrator and, in Scanlon’s meta-structure, author of Forecast, has returned to his mother’s house to wait for their emergency radio to “roar to life and announce the collapse of the Ross Ice Shelf…trigger a tsunami…and Seattle would cease to exist.” His mother waits for her cancer to claim her, and he waits for his writer’s block to claim him. It is a liminal period, yet it progresses smoothly, and much like Forecast it stands between the oracle and the satirist.

As such, it is a post-apocalyptic landscape before the apocalypse, one where Muckleshoot Indians “reclaimed the channel as part of the tribe’s Usual & Accustomed Area” and members of his former drug dealing gang, The Source, instruct Williams to “live in the fucking moment” before knocking him out and stealing his bike. “Usual & Accustomed Area” could be a playground euphemism and the Source a pun on artistic inspiration.

“Maybe the Source was right. Maybe it was all just storytelling,” writes Scanlon. The deflationary humor doesn’t stop at the world, however. After repeating Forecast’s premise aloud, Russell Jonskin, leader of the novel’s titular guild, admits, “Okay, the metaphor is a little thin, but the message is devious.” With this, Scanlon mocks his own novel and his vision of literature. Blake Williams, significantly, is visionary Romantic poet William Blake’s name backwards. Shortly after, Jonskin hires Blake to rewrite Seattle’s history.Only six of thirty-nine chapters in, and already conceptually overwrought, The Guild of Saint Cooper is a serious joke that can’t wait to tell itself.

While Marxist in spirit, Scanlon’s novel is also infected with pop culture. Jonskin reveals that he wants Dale Cooper, from David Lynch’s Twin Peaks, to star in the new history of Seattle. “Can you come up with someone more interesting? ” Williams challenges challenges Jonskin. Perhaps. But it is as much a joke about the arbitrariness of written history as it is a way for Cooper to become a representative of the urge to “destabilize and to comfort, ” to make one “skeptical of the quotidian façade, ” and quoting Cooper, to make the novel “both wonderful and strange. ” Cooper’s “suitability was nearly irrelevant, anyway, ” admits Williams. 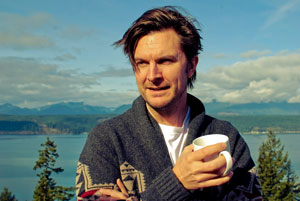 This cynicism is hard to disagree with. A recurring secondary character, Sargent George Washington, who appears quoting Wallace Stevens’ “The Idea of Order at Key West,” reveals this major flaw in The Guild of Saint Cooper: A farrago of references tumble together, never cohering enough to prove they are not “nearly irrelevant.” As with the threat of a tsunami in Seattle, massive concepts don’t fit well in small spaces.

Initially reluctant to “fictionalize the world” for Jonskin, Blake Williams eventually admits, “It was this tenuous and naïve relationship between the real, material world and the stories he wanted to tell that interested me.” This rationale produces, in another slant meta-fictional gesture, the story of “one man but which told the story of Seattle as a whole. Of more than Seattle—of a humanitarian crisis.” That is, the story of Blake Williams’ childhood retold with the fictional Dale Cooper added. All that’s left is the history that is written, and Scanlon shows this seamlessly, convincingly.

By supplanting history with an intricate fantasy of aliens and corporate conspiracies to house them—as Michael Chabon says, fiction aims for in “Trickster in a Suit of Lights,”—Scanlon works to “scramble the conventions, to undo history…and to find and lose himself in the act of entertaining.” Only, he loses himself too much. The consequences of his self-consciousness are great. In all the slapstick and absurdity, he lacks the precision of writers like Ben Lerner who are similarly reflective on literary form and concerned with reader experience. The lights on Scanlon’s suit are too bright. As one of the many flat characters pithily declares, “illumination can lead to blindness.”

“The imagination loses vitality as it ceases to adhere to what is real,” Scanlon writes, quoting Wallace Stevens.” There is no idea more profoundly argued against in The Guild of Saint Cooper than this one. Even Williams is proven wrong that “fantasy could never approach” what “brought the reader closer to his predicament, to his life.”

History is the fantasy of one’s life. As Stevens’ writes in the poem, “The maker’s rage to order words of the sea,/…And of ourselves and of our origins” is precisely the song of the writer. Even beyond our origins into the uncertainty of our ends which, like a wave, we wait to come for us. But, with Scanlon, the waiting is never silent, and never very serious, unable to avoid intellection’s mirror. If only Scanlon avoided its “mimic motion/made constant cry…/that was not ours.” Maybe then we could understand the reason for so much laughter, and make it ours.