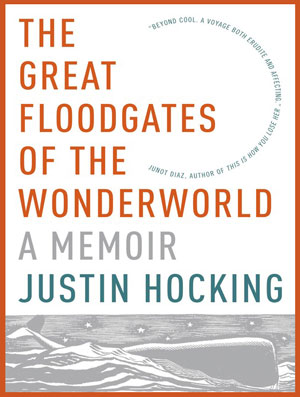 THE GREAT FLOODGATES OF THE WONDERWORLD
by Justin Hocking
Graywolf Press, 266 pages

Let’s get this out of the way: According to Justin Hocking, it’s not not sex. In his recent memoir, The Great Floodgates of the Wonderworld, Hocking shows that boys also want emotional gratification that often, coincidentally, happens with sexual encounters. And he wants it pretty badly. He might even want it as badly as Ahab wants revenge on the white whale.

Hocking’s desire—his addiction—certainly leads him to some strange and dicey situations, and, like Ahab’s quest, often has harmful effects on the people surrounding him. Hocking makes many analogies to characters and situations in Melville’s epic novel. Comparing his life quest for emotional fulfillment with Ahab’s vengeful leadership of the Pequod is only one, and a relatively undeveloped parallel at that. 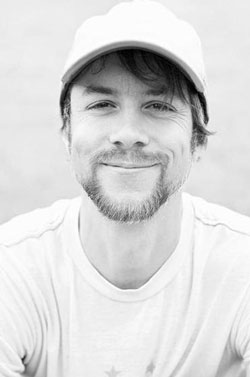 The narrator is much more attracted to the unskilled Ishmael’s adventure aboard the whaling vessel, and his feelings of lostness in the vast watery world. The memoir describes Hocking’s sojourn of a few years in New York City. After moving from suburban Colorado to the crowded “isle of the Manhattoes”—sorry, rather, Brooklyn—he discovers the pleasures and compulsions of the great sport of surfing. Yes, surfing! Long Island is no Southern California, but for city surfers the shores of Far Rockaway more than suffice.

Throughout the book, alongside his personal history as a reader of Melville, Hocking compiles a history of the sport of surfing, showing its colonial origins and its development in the twentieth century as a popular and competitive endeavor. The sport, a lesser sort of addiction, keeps him buoyant despite an unsatisfying job as a manuscript editor; his friendships among other surfers, as well as the fellow members of an addiction group he joins, are among his strongest in that monumental anonymous city which can often feel about as lonely as an ocean.

Hocking has a knack for describing a sight or a scene with both lightheartedness and emotional heft. At Rockaway, he discovers “a destination worthy of hitchhiking or the squandering of a day’s wages,” a place that, despite the occasional garishness and clamor, offers fleeting glimpses of the sorts of objects that draw Hocking’s attention, like the distant, officious “cargo ships and oil tankers…off on the glimmering, gun-metal horizon.”

These passages of description, among the book’s strongest, are textbook examples of the writer’s aphorism “show-don’t-tell.” They give a sense of what sorts of objects Hocking finds compelling, what objects draw his attention, and watching this gaze is very often more interesting than the explanation he will then launch into about how his journey has been represented by these external objects—the shore, the waves, what lurks beneath, and Melville’s encyclopedic epic novel that narrates them.

Hocking loves surfing as much as he loves Melville, and his love expresses itself in both cases through acts of explanation. For the latter, he diminishes history in favor of a focus on mythic–transhistoric–archetypes devised by Carl Jung and championed by his disciple, Edward Edinger. His affection for this idea can’t be anything but endearing—how much can you really resist the bronzed enthusiasm of your surfer friends in college, who could have such serious fun watching Star Wars on Saturday afternoons. You can almost see Hocking’s bleached curls bounce when he shrugs to acknowledge—yeah, his theoretical guides aren’t “much in vogue these days.”

According to Hocking’s Edinger, the journey of Moby Dick—it’s Melville’s journey, too, evidently—is a “Nekyia,” one in which the hero must descend into the depths before rising again. The astute reader has, by now, correctly guessed that the narrative of Great Floodgates will end in triumph. The trauma’s past. “The drama’s done.” He gets the girl. He moves to Portland.

It’s hard to say that Justin Hocking hasn’t read Moby Dick closely enough and not worry about hurting his feelings. It’s harder still, though, to claim that anyone in Moby Dick has a hero’s journey, even Ishmael. Hocking says that “Ishmael is reborn through the wreckage; having assimilated his shadow after this deep psychic battle.”

That’s certainly one way to read the novel, an interpretation that depends on an optimistic and buoyant desire to make literature neatly useful. Melville may be up to something else, though. Consider that the first edition of the novel had no closing epilogue: the whale sank the ship and everyone, including the narrator, died. Melville added an epilogue to the second edition to explain how Ishmael lived on—wretched and clinging to a coffin. In the first chapter, Ishmael introduces himself, probably insincerely, and speaks darkly of the unshakeable “drizzly November in [his] soul,” of the temptation to throw himself on his sword, like Cato. Moby Dick’s last word is “orphan.”

In addition to powerfully externalizing those often-submerged masculine feelings, the boyish vulnerability that lingers on into adolescence, and post-adolescence, and adulthood, Hocking’s genius is in his sincere, un-self-conscious performance of the countervailing dynamism of literature, the paradoxical way that a work of narrative art can give a sense of closure while denying that same satisfaction to its own characters.

That closure has great utility: Freud once wrote, for example, that literature allows us to imagine that we can imagine death although we actually can’t imagine our own dying. It’s politically useful, too: In the terms of classical Greek literary criticism, this is the principle at work in catharsis—the fear and pity evoked by the downfall of the sovereign. In modernity, it’s tougher to identify a sovereign—is it the whale, the captain, or the norms of plot and character development that only appear to be self-evident after one too many novels?