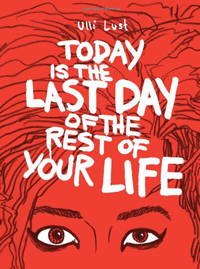 TODAY IS THE LAST DAY OF THE REST OF YOUR LIFE
by Ulli Lust
translated by Kim Thomson
Fantagraphics Books, 460 pages

Note: Lust’s memoir was edited and translated into English by comics visionary Kim Thompson, who passed away earlier this week. This book, along with countless others, is a tribute to his legacy. –T.O.

Why weren’t more women dharma bums, taking trips across the country like the Kerouac’s and Cassady’s and Snyder’s of On the Road and beyond? Why weren’t more of them trekking up desolation mountains, sleeping in boxcars, bumming cigarettes and hash and old paperbacks and swigs of wine from strangers?*

Ulli Lust’s thick graphic memoir, Today is the Last Day of the Rest of Your Life, though set in the early 1980’s, decades after most of the beats had already burned out, and continents away – taking place in Austria and Italy – offers a potential answer, in the form of Lust’s own resounding howl. The book features snapshots in the life of a girl, a newly self-affiliated punk raised just over the western side of the Iron Curtain. At almost seventeen, she sets off on foot for Italy with just the clothes on her back and aspirations to “accumulate as much experience as possible, to meet as many people as possible – from the bum to the millionaire, normal people and crazy ones….” And she does. Except, as it turns out, people, or at least the men she encounters, from the artist to the Buddhist, from the junkie to the politician, are a lot more alike than not. And they are a lot less interested in helping her along in her journey, in fostering any kind of a meeting of the minds, of experience as acquaintance, intimacy, or knowledge, than in objectifying her, in using her to fulfill their sexual cravings. As it turns out, to them, she is, and perhaps can only be, an object of lust, nothing more, nothing less.

We never learn whether Ulli’s experience is representative of other travelling, rebellious punk women, striving against all odds to leave their stifling home lives behind for a world of uncertainty and adventure (which really turns out to be, largely, a world of danger). The other central female character in the memoir is Edi, another youngster with a much more stultifying and destructive appetite for experience. Edi’s response to the powerlessness of being a perpetual object of desire is quite the opposite: unlike Ulli, she seeks out her sexual escapades, luxuriating in the sense that men want her, that she can, at least one way and if only for a short time, control them. 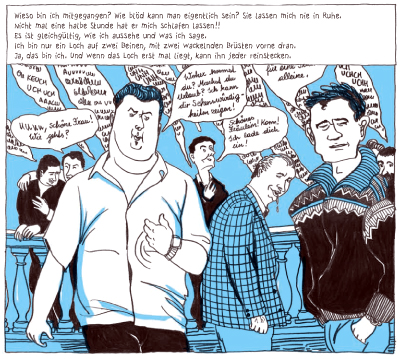 The girls’ friendship is based on a shared desire to run away and try new things –prostitution, the opera, heroine, panhandling, sleeping under the stars… And the beauty of this graphic memoir is in the way, image by image and line by line, it captures that yearning and its momentary fulfillments in the shapes of breathtaking, carefully drawn landscapes, or drawings that depict Ulli’s surreal fantasies, like her body floating happily over the Spanish stairs. These flashes contrast with the much more frequent and overwhelming desolation and gloom that confronts the two women – the sense of powerlessness and disappointment that can emerge only out of the most hopeful and naïve youthful aspirations. Both women are eventually beaten down by the journey; their friendship dissolves in a series of betrayals. What remains of this experience? Lust seems to be asking. What can you do with fragments of memory, still sharp and detailed, from a journey that so changed you but almost broke you?

The thick, two-colored memoir is framed with pieces from Lust’s real-life archive – journal entries, a couple of photographs, an unmailed letter. What is so astonishing about this work is the way that the comics, composed decades after the adventures they portray, so closely match that youthful exuberance and obstinance as reflected in the documents taken from that moment in time. A fragment from one of her early journals (from 1981, when she was thirteen) reads:

What kind of a person am I?

Am I even actually a person?

I can never quite reach any kind of conclusion, sometimes I’m melancholic, sometimes I behave like a total fool, like a nut, and then suddenly I’m full of energy and threatening to explode. Just like now. My whole body is itching, it’s awful.

The images throughout the text vibrate with those same clamorous emotions – we feel Ulli’s anger as she fights her aggressors, her excitement as she walks into a Clash concert, her desperation as she hungers for a bite to eat. But even as Lust reveals the contours of Ulli’s interior world through expressive, often horrifying images, what makes this memoir so stunning is the way Lust simultaneously holds back from offering too much information. Even as we learn what Ulli is feeling, from moment to moment, we don’t know what this journey will inevitably mean for her, how it will ultimately change her. Like any seventeen year old setting off into the wide unknown, we don’t know how the story will end. 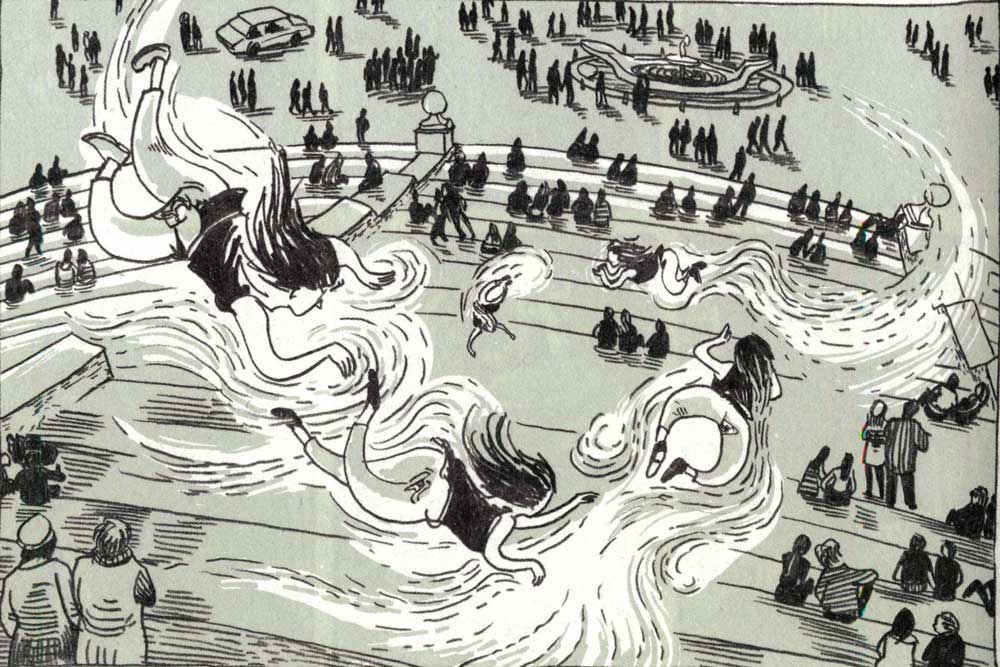 *Of course, there were lots of women who took part in the so-called Beat generation, by engaging in those and other activities, and Brenda Knight, for example, has anthologized many of their writings in her book, Women of the Beat Generation: The Writers, Artists, and Muses at the Heart of a Revolution (1996). Joyce Johnson, author of Minor Characters: A Beat Memoir (1999), was one of them.

Tahneer Oksman recently completed her Ph.D. in English Literature at the Graduate Center at CUNY. Her articles on women’s visual culture have been published or are forthcoming in a/b: Auto/Biography Studies, Studies in American Jewish Literature, Studies in Comics, and several upcoming anthologies. She has taught at NYU-Gallatin, Brooklyn College, and Rutgers University in New Brunswick. Currently, she is at work on a manuscript on Jewish women’s identity in contemporary graphic memoirs. In the fall of 2013, she will be joining the faculty at Marymount Manhattan College as Assistant Professor of Writing and Director of the Writing Seminar Program.