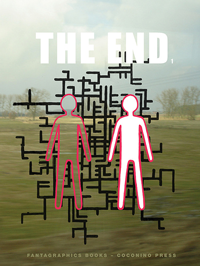 The Humming Bird.
The Condor.
The Giant.
The Hands.

I hold your head in my hands and your heart in my heart and I look at you and I am floating above the bed alone and there’s nothing I can do at all because you’re gone. 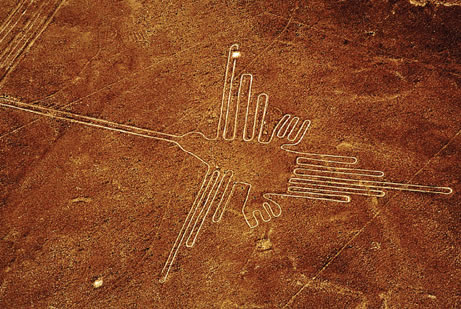 These are the Nazca Lines. Located in the southern desert of Peru, these ancient geoglyphs dot the landscape, their purpose unknown, their mystery immense. Carved into the earth by the Nazca Peoples, the exact date of their creation is impossible to pin down, but researchers believe they were made between 400-650 BCE. When standing on top of the lines, within them, it is impossible to discern the shapes of the designs, though they are figurative and quite complex. One needs the great distance and height of the surrounding foothills to see and understand their intricacy.

In 2005, Anders Nilsen’s fiancé Cheryl Weaver died after a long battle with Hodgkin’s lymphoma. That’s when Nilsen began writing and drawing in his journals – laying down in lines the solid grief that would become The End. His drawings are not of the Nazca Lines, but sometimes they look like them.

There is a glyphic and timeless quality about much of Nilsen’s artwork in this book. He does not draw pictures so much as he writes them. Aside from a few forays into the truly figurative, the majority of the work is drawn in icons, referring to but not representing real people.  He has created ciphers for himself, and for her – in his state of abject grief it did not matter what they truly looked like. In his deliberate omission of detail there is a clarity that is brutally true to the experience of grieving a loved one, in this new world of sadness there is only man and woman, Anders and Cheryl.

There is a mythological quality about his work too, and perhaps that’s why it feels timeless. It’s Orpheus and Eurydice, except Nilsen never ventures after Cheryl into the land of the dead, only into his memories. But The End is not explicitly about myths, or history, or ideas, though it may evoke them. The End is not like Nilsen’s last completed work, Big Questions, a 600 page opus which was about all of those things. The End is 88 pages of the most crushingly raw, honest and affecting comics I have read in some time.

Dealing with death is the process of gaining perspective on life. 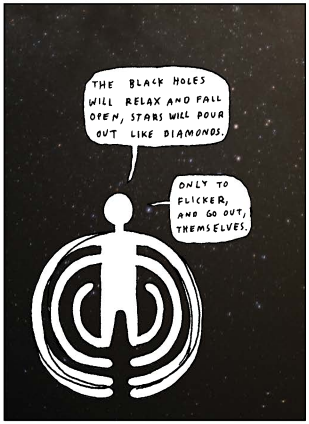 The End is a kaleidoscope of perspectives as experienced through a singular vision. There is nothing for the reader to hold onto: you will get dizzy, you will stumble and fall into Nilsen’s grief and you will experience it with him – that’s one of the reasons why this book is so effective. While a dead lover and one man’s grief could easily be an emotional gimmick, our inability to hold onto a coherent narrative turns this tale into something much more intimate and immediate.

The majority of the “story” in The End moves at a steady rhythm, underscoring the banality, the crushingly quotidian nature and moment-to-moment quality of dealing with life after death. These sections of the book are figured as a dialogue between Anders and Cheryl, or rather his memory of her. “What do you remember about me now?” she asks him. There is no story in The End, only moments captured in images. All of this is punctuated by the pale blue scrawl of Nilsen’s handwriting – ghostly – written as though he weren’t even there.

To read The End is to read the experience of incommensurability – perspective is impossible because when it comes to pain and loss and suffering there is no such thing, at least, not at first. Like the Nazca Lines, the lines of Nilsen’s pain are strange and alien yet altogether strikingly, unsettlingly precise in their renderings. Standing on the foothills at the edge of Nilsen’s loss, we are given the privileged position of both seeing and feeling the experience of another person’s grief. Though at the time it may be messy, Nilsen’s line etches the exact feeling of the pain death brings with it. Nilsen is not carving lines into the earth as much as he is into his own flesh. It is not all hopeless, it is not endless – The End does end, for Nilsen and for all of us.

Henry Steinberg grew up in Philadelphia and recently graduated from the university of Pennsylvania where he studied English and Creative Writing. He is also a letterpress printer and bookbinder, and loves all things ink and paper.