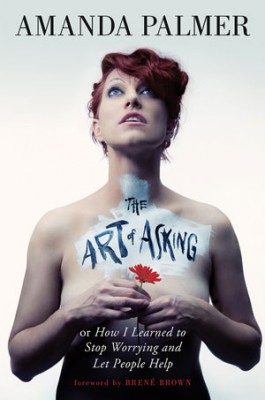 “Art is the Artist”
I first heard of Amanda Palmer while driving a flashy, cherry-red Mustang convertible blasting “Girl Anachronism” from a speaker system clearly not made to handle any song at full volume, let alone one already deafening at standard volume for an ipod-earbud combo. It didn’t help that it was my car, and that my first girlfriend and I were the ones in it.

By 2009 a year had passed since Palmer’s band, the Dresden Dolls, broke up, and three years before she would give the TED talk that would inspire the memoir The Art of Asking. My relationship and my car had both broken down by that point and as I, that bachelor now in a minivan, would likely have said about Palmer’s memoir-essay, there is one thing the three have in common: they deeply affected my life, and then repeated themselves enough that I wanted them to be done with.

Memoirs often annoy me, in part, because they take Whitman’s advice too literarily: “I celebrate myself, and sing myself.” And that’s not to ignore that such songs lend themselves to marketing nicely. That is the function, generally, of celebrity memoirs. But Amanda Palmer, musician-blogger turned memoirist, was already given this treatment, wrongly, when her more than successful and record-setting Kickstarter became journalist gossip about, as she summarizes, “what a terrible person I was, on top of being an untrained, unprofessional, shitty musician.”

This book doesn’t feel like it intends to sell itself. It even comes across as if it has no idea who the audience is, as when she explains crowdsourcing, “for the uninitiated.” (What Palmer fan purchased this book “uninitiated?”) Like any good memoir, be it Virginia Woolf’s Moments of Being, or anything by David Sedaris, it uses its jointed memory to propel it towards insight. How the joints connect, though, is what makes a memoir work. So, while Sedaris uses a series of essays, and Woolf the titular moments of being, Palmer’s book seems nebulous in that it has no organizing function. The text switches between her budding romance with Neil Gaiman (now her husband), to her record label experiences, with essentially random stories intermixed, as new experiences accrue over time.

Despite this contextual shuffle, there is more than the semblance of a theme. “It’s not the act of taking that’s so difficult, it’s more the fear of what other people are going to think.” So she insists that we “take the flower,” or “take the donuts,” or “take the coffee.” The point being that to learn and practice asking, you must accept the help of others: “the truth of the matter is that your acceptance of the gift IS the gift.”

It’s precisely this mutual aid which, conveyed in non-hierarchical mini-stories mimicking the brief and charged nature of forum posts, evokes a socialist critique of American mores: from “typical tale[s] from the failing American health system,” to reminders that Thoreau’s legacy of roughing it at Walden Pond involved his mother and sister bringing him “a basket of freshly baked goods, including donuts,” and references to social worker Brené Brown’s writings on American individualism’s limiting us by turning us against asking for help. While it’s hard not to want more than a book spine to hold the argument together, credit must be given for what comes across as Palmer’s unquestionable backbone.

Also equally unquestionable, perhaps due to lurking grudges of my ex, is how simply annoying and disruptive her font and space usage is. This element, too, makes the book not dissimilar from a forum post. Palmer’s tic is to capitalize and italicize, and place several one-sentence paragraphs beside each other, as if to reproduce speech on the page (every italic, above, is hers, not mine). This may be effective at drawing attention, or it may simply betray a lack of subtlety. Possibly I’m just not playful enough. To avoid coming across as curmudgeonly, I must say I did like the addition of the tour pictures and lyric sheets that divide the book.

But there is a target audience for this style, the same one, I imagine, that forms a cult of followers who see Amanda Palmer as vaguely divine: an audience of dispossessed, outsider, high school students for whom she, the “Eight Foot Bride,” offers this flower. It’s hard for me to ignore the undertones here of the Bride of Christ, the church which offers peace to the suffering. That’s to say, Palmer treats herself like a religious institution. In a particularly egregious example, after having her ukulele stolen, and after the cynical response that follows, the thieves return it and are forgiven as she “watched [her] faith in humanity…blossom a new little flower.” Do we take this flower?

At a show in 2011, Amanda Palmer learned that a fan, Diane, had lost her entire family in the Christchurch Earthquake. Palmer and fans attempted to comfort and support Diane. Only later they discovered that her story was false. Palmer writes of the experience of giving of herself under false pretense, “Oddly enough, her lie had pulled us all together.” Was this the goal of The Art of Asking? The reader can only wonder. Whether she is self-aggrandizing or not, I admire and respect Palmer for her persistence and openness. I was even taken up in the stories. But as with poor game-design, after a while I started to recognize the repetition and the illusion broke entirely. I suppose also like my first relationship. After finishing the book, I did realize something. I’m unsure whether the unavoidable fact that “the story was fake, but the impact was real” is enough for me.