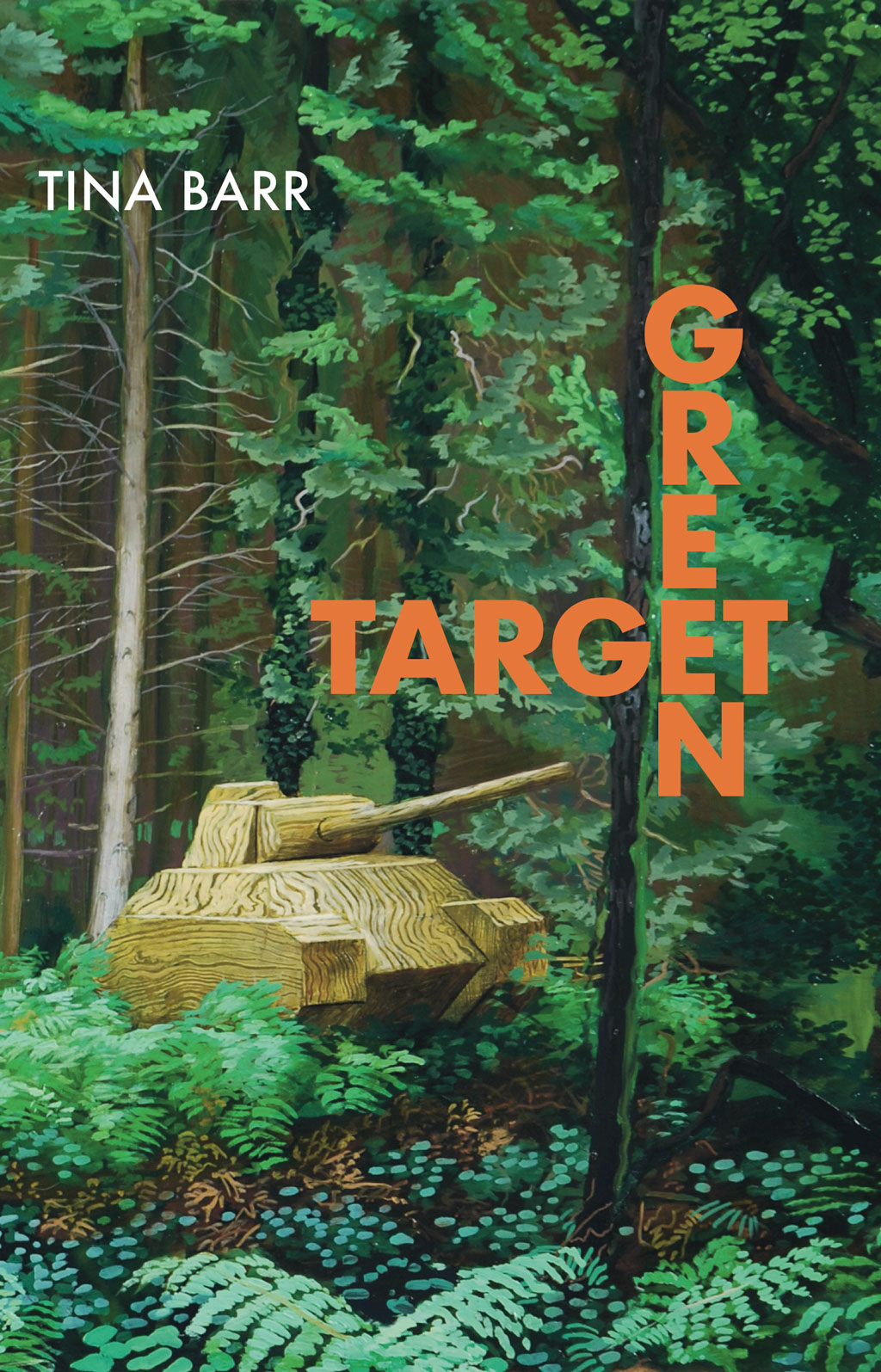 In her latest work, Green Target, Tina Barr prods at the simultaneously tumultuous and cooperative relationship between humanity and nature, writing from her cabin in Black Mountain, North Carolina. Barr blends the intimate details of personal existence with the macrocosmic scope of collective human experience, cleverly balancing comfort and misery. Barr’s poetry harmonizes the intersecting lives she details, whether they be animal, botanical, or human. All is seen and accounted for through her kaleidoscopic vision in which events, objects and people are constantly shape-shifting, bleeding into each other, losing their original form, becoming targets for Barr’s eye-opening observations.

Barr introduces us to her unique vision right off the bat in “Tick Tock Tank” where she unveils an invisible-to-the-naked-eye network linking a brutal car accident, the great American thoroughbred racehorse Secretariat, Panzer tanks still embedded in the forests of Normandy, and a Luna moth resting on the top-end of her walking stick. This last image sets the tone for the rest of Green Target as one can envision Barr strolling through the thickets of civilization, her path illuminated by an embodiment of nature crowning her stick. Barr presents the horrors of reality then yanks the reader away before they become too morosely immersed by offering an image of rebirth as a remedy.  For example, when describing the tragic outcome of the aforementioned car accident, she writes:

Inside
the Mazda, a local track coach broke his
spine, his pelvis; his brain
leaked.

This violent directness is later countered with vivid descriptions of nature’s tranquility.  Just a dozen lines down from the accident she writes:

…a Luna moth settles
at the top of my walking stick
at the cabin door, tiny pomegranate
eyes its regalia, big as a hand
the green of a moon not yet seen.

Barr does not deny tragedy; she embraces it in order to show the hope that lingers underneath, revealing the natural potential for rebirth often clouded by the reality of death. 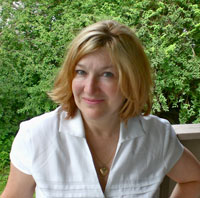 As in her last book, Kaleidoscope, Barr takes the ekphrastic route to aid the visualization of her poems in Green Target. Artwork by Joyce Thornburg and Jasper Johns act as complimentary pieces to the vast scope of the book, though many more pages are spent with Johns, whose work makes quotidian objects like flags and targets seem excitingly unfamiliar to the viewer. This slight shifting of the familiar to something out-of-the-ordinary mirrors Barr’s own examination of subjective observations. Like she did in Kaleidoscope, Barr looks at an object—a painting, a spider web, a copperhead’s freshly-shed skin—then rotates the cylinder, loosening up the bits of glass inside to provide a fresh view of what is often considered the mundane. By merging poems in Green Target with the Jasper Johns paintings that inspired them, the reader is invited into Barr’s kaleidoscopic vision, into an ability to harmonize the image with the text.

In “Target with Plaster Casts, Jasper Johns, 1955,” Barr intermingles the colors used in the painting with the blood of beavers that have been beaten into hats in order to strengthen John Jacob Astor’s fur empire. The yellow rings of Johns’ target become beeswax; the black bull’s eye in the center, a bruise. Barr, in response to her mention of the bull’s eye, declares, “all the bulls I know have lashes and flies.” As for the Bumblebees whose wax colors the yellow rings of Johns’ target; “even their/ colonies are collapsing.” In these examples, we see an inversion of what was done in “Tick Tock Tank.” Here, we are pulled into the horror instead of away from it, reminded of the damage humanity has done to non-human species to maintain its supreme comfort. Barr’s sense of balance demonstrates her pragmatic approach to life. Although she finds the painting aesthetically pleasing, she cannot ignore the horrors that she relates to the colors within. She is not trying to preach. She is simply bearing witness, observing the painting through her sight that, when shifted, reveals much more than what was originally there.

In “White Target, Jasper Johns, 1957”  Barr ponders the oncoming winter, her mind wandering to Italy and France, where the Grands Montets ski resort is getting creative in their fight against global warming by covering Rognons Glacier with a tarp. The possibility of future generations practicing the age-old tradition of making snow angels are obliterated as Barr’s worldview takes a bleak but painfully realistic turn:

Some day children will be unable to lie down
arms and legs plow aside the snow, signal
their imprints, legions of snow angels.

At the local level, Farley, a pseudonym for one of Barr’s actual neighbors, regales the narrator with tales of burning barns, a suicidal pond owner, and a gunned-down game warden. Barr considers the lore, spots the links between all actors, and sees the concentric circles of life “…widening, until they jam against each other,” like the concentric circles in Johns’ target painting. The connection between the tarp on Rognons Glacier and Farley’s tales are not direct but, when viewed through Barr’s gathering eye, they become attached due to their tragic characteristics. Individual tragedies are merged with humanity’s tragedies, joining us all together in our shared struggles and unveiling the natural inside the human.

The final ekphrastic poem, “Target with Four Faces, Jasper Johns, 1958” takes us to the streets of Egypt where Barr finds herself observing while being observed in the Holy Land, post-9/11. Barr weaves this self-targeting in with her physical descriptions of Sohag as she tells of mosquito-infested shower stalls, unmanned kitchens, and jeeps packed with armed soldiers herding tourists as they head to Akhmim to see the weavers. The concentric circles of life continue to widen with Barr connecting the blue, yellow and red circles in Johns’ target with the rounded pillars found within the Karnak Temple Complex, one of the oldest religious complexes in the world. Despite the obvious distance between the complex and Johns’ abstract expressionism, Barr still manages to make a connection, further solidifying her vision of the earth as one massive target for humanity and vice versa.

On display in these ekphrastic poems, and in all of Green Target for that matter, is Barr’s desire to identify the tunnels that lie beneath Johns’ famous target paintings which double as a visual representation of the connective thought-processes of her poems. In “Pot of Gold” the narrator contemplates vengeance on Lindy and Ed, the people who sold her a piece of land. They hadn’t paid their taxes, rendering the land delinquent. The speaker proclaims,

I want to set fire to their trailer, to
bait their place with honey, so bears
tear their cars open like sardine tins.

But, directly after that proclamation, she checks herself, realizes her own inevitable flaws, flaws that are within all human beings by default, and adds,

I line up people like toy soldiers, whose
carelessness is never personal, the way
poison ivy grows…

The want for revenge is like the ivy—poisonous yet organic, honest. Barr does not shy away from this honesty, even when it is naturally vicious, which allows for her convictions to be taken that much more seriously.  She does not exclude herself from her own subjective targeting, allowing for what starts in contention, i.e. the natural and the human, to become gradually more synonymous than oppositional throughout Green Target.

Green Target casts a wide net that captures the good, the bad, and the inevitable that exists within earthly life. The thirty-nine poems that Tina Barr has compiled here bring to light the relations between humans and nature, both collaborative and dysfunctional. The topics touched on demand our attention as they reflect our collective situation regarding humanity’s future and how we choose to both observe and potentially empathize with the world around us. Regardless of the political alignment of its individual readers, Green Target offers its collective audience a glimpse at harmony, cooperation, and the pressing need to target both in our own lives. 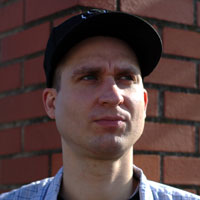 Jeff Klebauskas is a recent graduate of Bucknell University where he gained his bachelor’s degree in Psychology and Creative Writing. Before that, he attended the Community College of Philadelphia and received the Judith Stark Creative Writing Award for both poetry and fiction. He is currently applying to MFA programs for the fall 2020 semester. His work has appeared in Confetti Head, The Bucknellian, and Limited Editions.