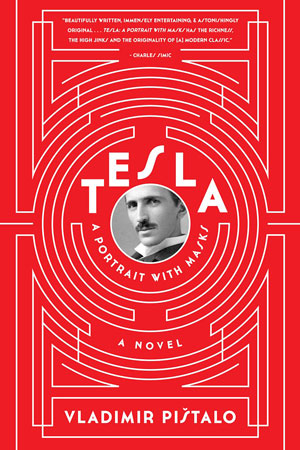 One of the most illuminating moments in Vladimir Pištalo’s biographical novel, Tesla: A Portrait with Masks, comes not when the protagonist is immersed in the electrical discoveries for which he became famous, but when he is translating poetry. Searching for an English equivalent to the Serbian phrase crammed in, he pauses his contemplations to offer an observation: “On the outside, Serbian looks like such a tiny language,” he opines to his collaborator and friend, Robert Underwood Johnson; “but it’s so roomy on the inside.” It’s a short remark but one that is loaded with significance. Tesla himself was an outsider. A Serbian in North America, a loner in high society, and a genius among men, he was set apart from others his entire life. This outsider, however, possessed an intense inner existence molded by the death of a brother, and a capacious affection for the human race that informed his life’s work. When he noted the duality inherent in the Serbian language, the inventor could just as well have been describing something fundamental about himself.

He could also have been commenting on this novel. This is the first book by Vladimir Pištalo to have been translated into English and is an entirely appropriate debut given both his scholarly interests and personal history. A Sarajevo-born academic who is currently Professor of Liberal Arts at Becker College in Massachusetts, Pištalo wrote a PhD dissertation on the concept of national identity among American Serbs in the twentieth century—a thesis for which Nikola Tesla himself could have been a case study. The similarities between the men are obvious, as is the interest the inventor must have held for the scholar. More than is usually the case, the writer knows intimately what he is imagining here. 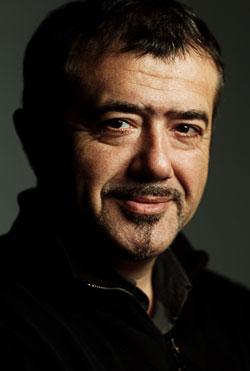 This first time English readers can enjoy Pištalo is made especially notable by the role the language itself plays in painting the portrait of Tesla. Bogdan Rakić and John Jeffries’ translation crackles with idiosyncrasy. They vault from word to word with a consistent air of eccentricity that seems to confirm Tesla’s linguistic observation while encouraging a jaunty, uneven tone from the outset. The text, in translation, gives off such a palpable sense of having been conceived in another tongue that this transparency of form cultivates a threat of being almost distractingly singular in delivery. What ensures that the novel never completely falls to this danger, however, is the way that the language complements the nature of the man it serves to reveal. Take this, from an early chapter, “An Aside on Flying:”

Sometimes I fly all the way to the stars, where it’s always morning and where people made of silver live. Sometimes I plunge through the blue void in between the lights of the universe or dive in the ocean depths among the glowing fish. In the middle of the night, I long to see the day, and I see it. Sometimes I see the day on my left and the night on my right. I am Alexander, the conqueror of apparitions.

This strange, close-to-hallucinatory passage captures something of the novel’s timbre as a whole. To say that Nikola Tesla was a singular individual is uncontroversial. Quite apart from his extraordinary scientific achievements, his behavior around his fellows, as well as the path his life traced made him, in the eyes of many, the realization of the proverbial mad scientist. By writing his novel in this manner, Pištalo, with the help of his translators, consistently fans the flame of individuality that is mirrored within the individual at the center of the book. Beyond mirroring, the way the man’s story is told illuminates the picture of the man himself.

Occasionally, as in the above passage, Pištalo breaks from the predominant third person narrative point of view. While contributing to the book’s atypical character, these shifts can disrupt the rhythm. One such instance comes when the author has led us to the eve of an important, if apocryphal, event in Tesla’s life with a brisk exchange of dialogue and then proceeds: “at this point of the story, I have to gently but firmly take the reader by the arm, as we are about to step into legend.” The turn is ungainly, abrupt, and wholly unnecessary. Much later, Pištalo writes,

In fear, Robert gazed at luminous distances, gossamers, and fairy tales in Tesla’s eyes. In addition to Tesla’s irresistible charm, Robert also sensed a halo of eccentricity and solitude enveloping his friend and felt sorry for him.

There is no doubt that the reader has been worried about Tesla as well.

The slim but intrusive last line falls with an unwelcome heft upon the page. The effect of these shifts in perspective is akin to flinging pebbles at a windshield; their size and impact aren’t enough to shatter the narrative’s glass entirely but they nevertheless fall with a noticeable, enduring force. Certainly reminders of the book’s placement between history and imagination, they unfortunately leave behind thin cracks of discontinuity that distract from the question of such placement at all.

The novel has no such trouble with the portrayal of Nikola Tesla himself. Pištalo treats his protagonist with sympathy throughout, overlaying a sense of destiny with the tumultuous events and colorful personalities that contributed to the man’s life. It’s a compassionate depiction, and one that suggests that the inventor’s greatness lay not only in his scientific achievements—that is, not only what is plainly obvious from the outside—but in his depth of humanity. Even more impressively, it furnishes this depth with a complexity that augments the character in a troubled, realistic way. Pištalo’s Tesla is enormously sympathetic with the human race in general and simultaneously uncomfortable with personal intimacy. As Stevan Prostran, the son of one of Tesla’s oldest friends surmises, the inventor “preferred mankind to people,” and Pištalo agrees with this, littering the novel with public episodes and private reflections that bear it out.

To see this in sharpest relief, look no further than the juxtaposition of Tesla with his mentor and rival Thomas Edison—an individual whom the author conversely paints as completely lacking in the compassionate, empathetic capacities his Serbian understudy could not ignore. While Tesla, for example, “felt very sorry for the elderly. And the little children. Everything that lives,” Edison, “was in a state of competition with every man, woman, and child alive.”

Similarly, while the American is borne along by the hidden determination to “never spare anyone from what he had to endure,” even a morose, complaining Tesla observes that “all my life I’ve been working to serve mankind.” It makes for a distinctly unflattering study of the old master, while emphasizing the immensely endearing characteristics of his apprentice.

Most endearing of all, however, is the way that Pištalo charts Tesla’s trajectory over the final act of his life. As the initial intensity of the electrical age starts to fade and Tesla’s great days begin to recede, the novel’s crackling style begins to resonate in a more poignant manner. Nothing in the delivery itself changes exactly, but it’s as though, through the lens of old age and memory, Tesla’s life becomes illuminated in a kinder, more loving light than before:

A lonely pianist played in the enormous lobby. Followed by the Buddhist smile of the headwaiter, Tesla quietly left the hotel in which he had spent twenty years. Each new phase of his life was a new expulsion from the Garden of Eden. A clear stream gurgled across the keyboard while he pushed the Astoria’s revolving doors, for the last time, after two decades. He murmured, “We’re life’s apprentices forever!”

He looked at objects as if he could not remember what they were. He blankly gazed into other people’s windows and other people’s lives with an innocent smile, which approaching old age, made him look suspicious. Like a moth, he fed on light. The whole world appeared like a lit-up shop window, which our frozen loner now observed from the outside.

Whether it’s the length of time the reader has, by this point, spent with the author’s idiom, or simply the natural tenderness one feels for a humane figure in decline, the inventor’s final years fall in gentle, moving waves, made all the more affecting by the fact that he is, in some way, still outside. The man who knew better than anyone how different things are from within remained unable to let anyone from without enter his own, roomy interior; it’s to Pištalo’s credit that we feel we see as much of that interior as we do.