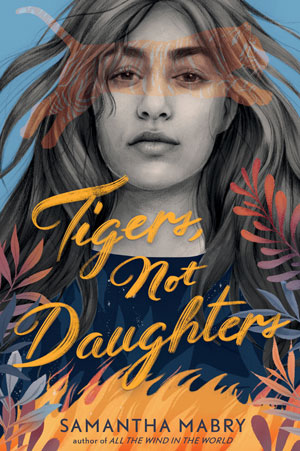 Samantha Mabry’s Tigers, Not Daughters is a modern-day ghost story that follows the Torres sisters—Jessica, Iridian, and Rosa—one year after the untimely death of their oldest sister, Ana. Wracked with grief, the Torres sisters ache for Ana; but their profound sadness is met with unexpected events that eventually make their sister’s presence known: raps on doors and windows, writings on the walls, sensory overload, recurring storms, flickering lights, dying animals, and one escaped spotted hyena lurking in the darkness of their neighborhood in Southtown. Ana reappears in a way the girls can’t begin to imagine and returns with a vengeance they don’t understand. Mabry tells a riveting tale of three sisters who discover the power of sisterhood and what it means to stay together despite insurmountable, unnatural odds.

What stood out to me while reading Tigers, Not Daughters was how colorful and tangible each of the Torres sisters is. Their characterization is well-rounded, Mabry vividly telling the story through the individual perspectives of each sister, as well as including a fourth perspective of a character that watches them from afar. Each sister is unique in not just who they are, but in how they grieve over the loss of Ana.

Jessica, the oldest of the newly-rendered trio, bears the weight of the entire Torres family on her shoulders, a weight that used to be Ana’s to carry. Jessica deeply admires her sister, so in her absence she willingly assumes the role of the head of the household: taking care of their good-for-nothing father, Rafe, looking out for her younger sisters, and working at the local pharmacy to help put food on the table and keep the roof over their heads. But grief warps Jessica’s admiration of Ana into an unhealthy emulation of her. To mourn the loss of her sister Jessica tries to become her sister. As Mabry writes, “She was wearing Ana’s lipstick, a dangerous shade of near-hot pink, as well as a bluebonnet blue sundress that used to belong to her older sister. It was several sizes too big and swallowed her up.” I love Mabry’s description of Ana’s clothes “swallowing” Jessica up because it serves more than to show what she looks like, it describes how Jessica feels. Jessica is stifled by Ana’s absence, and mimicking her sister leaves her empty with no identity to claim for herself. This lack of personhood results in Jessica’s second tell-tale trait: her anger. The author writes that “Jessica was mean because she was so full of life that it chafed her from the inside out.” 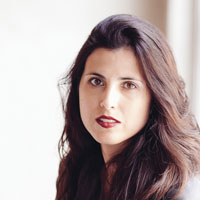 Iridian is the second-oldest of the sisters, a quiet girl who Mabry describes as someone who “never went anywhere without three things: a worn-out paperback copy of The Witching Hour by Anne Rice, a black-and-white composition notebook, and a peacock blue ink pen.” Ana’s death causes her to seek refuge in the books Ana left behind, and she tries to process her emotions through writing stories in her notebook. What I find interesting about Iridian is how Mabry describes so much of her character through her name alone: she’s observant to a fault but her pain allows her to only see what she wants to see, shutting out everything else and using her imagination to fill in the rest. Iridian internalizes her grief, coming across as cold, unfeeling, and stoic; but in reading the book further I realized that the opposite of this was true. To quote the book, “She felt everything—too much.” Iridian hides so much of herself within the pages of books because, without Ana, Mabry writes, “the world seemed so hard for her to live in.”

Rosa is the youngest of the three, an adventurous spirit who finds solace in nature among the animals. It was Ana who discovered that Rosa’s love of animals is something more, something akin to magic, and she continues to be in the company of creatures after Ana’s death. To honor Ana’s memory Rosa communicates with animals, particularly fireflies. She’s described as “[wanting] the creatures of this world to know they were being heard.” I find Rosa’s character special in that, despite being the youngest, she’s actually the most level-headed of her sisters. I believe Rosa’s maturity comes from channeling her grief to build upon her unique gift. Ana taught Rosa to love her abilities, thus she spends her time doing what she enjoys. Through Ana’s past encouragement, Rosa gains a unique piece of herself in Ana’s absence, while her sisters lose parts of themselves.

Mabry spins this modern ghost story with a fierce yet subtle magic that courses through her words, each sentence coming together like an incantation—filled with intent, purpose, and emotion.

Mabry spins this modern ghost story with a fierce yet subtle magic that courses through her words, each sentence coming together like an incantation—filled with intent, purpose, and emotion. Mabry is no stranger to the fundamental tenet of writing: “show, don’t tell,” which makes the story so riveting. Ana’s haunting spurs a series of events that are all connected, and the author reveals the true reason behind Ana’s return by employing classic storytelling techniques.

Rosa is the first of the sisters who learns of Ana’s return—noticing an abundance of fireflies in the evening, symbolic of her sisterly bond with Ana. Iridian’s copy of The Witching Hour foreshadows the haunting of the Torres sisters nicely, Mabry even hinting at the book’s ending: “at the end of The Witching Hour, the ghost wins.” Between the perspectives of Rosa, Iridian, and Jessica lies a fourth narrative—a quiet observer in the Torres sisters’ tale, reminiscent of the chorus of a Greek tragedy. The narrator is privy to the lives of the sisters, offering a near-omniscient perspective that adds a refreshing depth to the story. The author teases the identity of the fourth narrator with contextual clues, such as “We were the first people to witness Ana come back as a ghost, and we considered ourselves lucky.” Mabry sprinkles the tiniest details that help move the story along like breadcrumbs to follow, and near the end of the book I was delighted to discover who the mysterious narrator was.

In their pain each Torres sister holds onto a piece of Ana for themselves, each one believing that they love Ana more than the others. Grief is a personal, individualized struggle that Jessica, Iridian, and Rosa know all too well, so much so that their own pain cleaves them apart. Ana is supposed to be the glue that holds them all together, so who are they without her? But the beauty of the Torres sisters’ bond is that it’s forged in this loss. Ana’s death and the return of her ghost forces them to lean on each other, to cleave back to one another in order to protect themselves from the wrath of their older sister.

I particularly enjoyed how Mabry conveys the story’s overarching theme: the power of sisterhood. She explores this topic both through the loss of Ana and through the lens of toxic masculinity. With Ana gone the sisters try to find comfort, solace, and healing in the men that surround them, but to no avail. The men in their lives are self-serving, twisting Ana’s death to fuel their own desires and stroke their own egos. Their father is so crippled by the loss of his oldest daughter that he neglects the needs of Jessica, Iridian, and Rosa. Mabry writes that “the weight of [his] neediness was heavy enough to crush all of the Torres sisters.” The boys that hang out in the house across the street always watch the sisters from afar but would hardly intervene to help them in their time of need. Somehow they think of themselves as the sisters’ “protectors,” the author quips, “which was a silly thing all boys thought.”

I loved how the strength of sisterhood is reinforced through the symbolism of the spotted hyena that escapes from the zoo as a result of Ana’s haunting. Spotted hyenas live in matriarchal communities where the females are bigger than the males, stronger than the males, and all rank higher than the highest-ranking male. Female hyenas are also vicious killers who will hunt together and do whatever it takes to protect the other females in their cackle. Mabry is very intentional in her symbolism, as the hyena’s presence is Ana’s way of sending a message to her sisters that they must always stick together.

Tigers, Not Daughters is more than a modern ghost tale. The triumph of this story lies in the rawness in which the tale of the Torres sisters is told. The sisters’ loss is delicate yet ferocious, at times whispering through the pages, other times roaring to be heard. Mabry explores the depths and tenderness of grief and longing through her wonderful characterization of the Torres sisters. And her story shows us that there is something to be learned from both the literal and figurative ghosts of the past, so long as you take the time to listen. 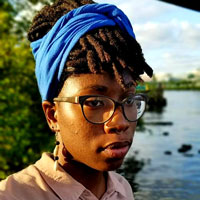