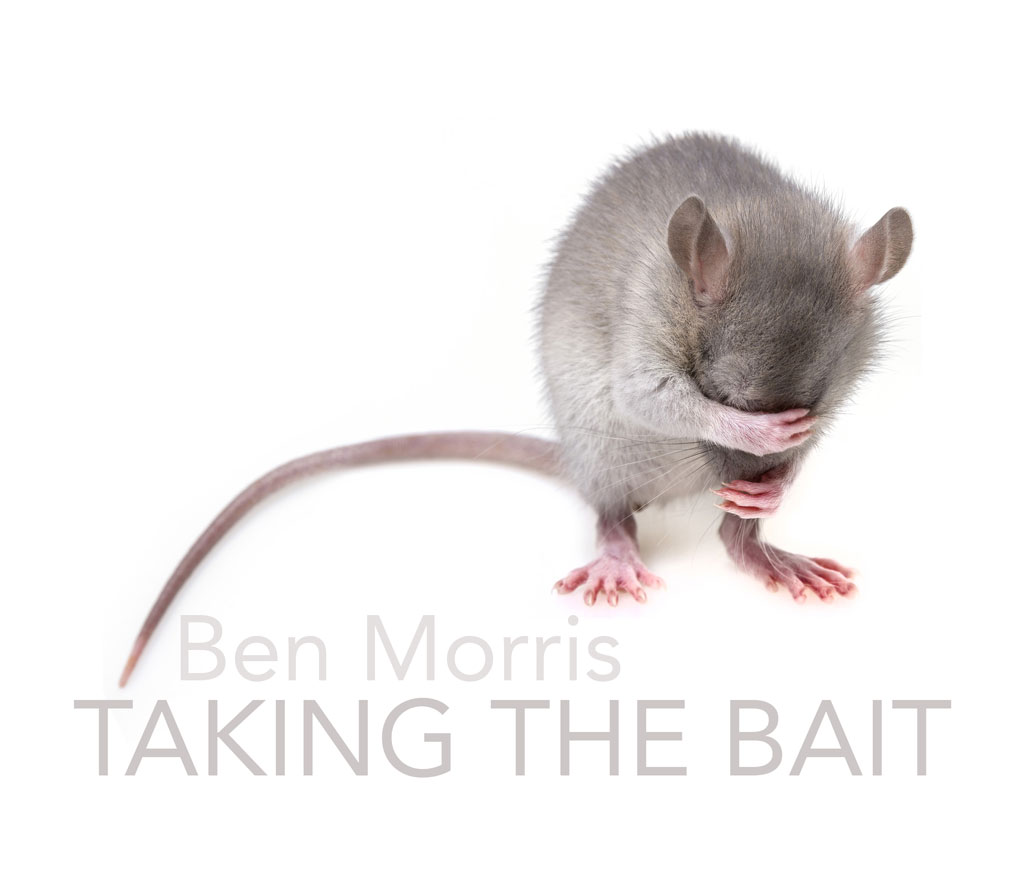 TAKING THE BAIT
by Ben Morris

When we couldn’t dance around it any longer, we set mousetraps and started imagining our two toddlers, Henry and Suzanna, losing their fingers one by one: limp pinkies crinkled like sun-wilt, severed rings, scattered middles, dirty orphaned pointers curling into themselves as if for protection.

“Little dead thumbs,” I said to myself.

“I’d put one in your drink,” Jay said, handing me a glass of foaming red. “Like one of those gag cubes with the flies in them. Nobody has a sense of humor anymore. And I don’t know that they would get completely snapped off. Broken for sure. Trip to the hospital, insurance, etc.”

“What’s this one?” I said, holding the drink up to the light. Every night I struggled to hide the disappointment from my voice. A mixologist phase with his cashier income made no sense at all. But Jay’s sister gave him a cocktail book for his birthday two months back and he insisted on working through it, buying bitters and vermouth by the gallons. He’d always been practical about this kind of stuff. But when we moved to North Dakota to be closer to his family, something changed. “It’s called the Bloody Devil,” Jay said with a smirk. “Complete with my own twist of Tabasco and salt.”

“Yummy,” I said, licking my lips. In that moment, the alcohol burning between lips and gums, I felt my hatred for him become genuine. I took another drink and looked out over the line of baited traps, our crude infantry of wood and metal, dollops of generic peanut butter fat on plastic squares of cheese, rectangular golden bars readied to snap. I felt uneasy just looking at them. “Why didn’t we use glue traps?” I asked. “My parents have had luck with those.”

“They don’t kill,” Jay said. “Somebody would have to march them outside and brain them against the garbage can.”

“Brain,” I echoed. “Braindead thumbs.” I broke a piece of ice between my teeth and thought a tooth cracked with it. “I guess I don’t know what they did with them,” I said.

Jay mixed more drinks and we moved around the house, laying traps down tenderly as if they were living, sleeping things. Two behind the washer and dryer, two behind the bookcase, one behind the chest full of blankets in the living room, and three upstairs in bathroom cabinets secured with plastic childproof levers.

Feeling satisfied we collapsed on the couch. Jay put on Gremlins and we started to screw around. I moved over him slowly. He nibbled my chin and started to muffle questions into my neck that I couldn’t understand.

Movement in the corner of the room caught my eye. I continued to rock on Jay and watched a long gray mouse crawl down the side of the blanket chest. Then it stopped and tested the air. Its sticky paws splayed against the wood. Beneath me, Jay sucked air between his teeth, his eyes fluttered. “Holy Christ,” he whispered. “Nice.”

When the mouse reached the floor it seemed to scan the area before bursting forward a few inches, its nose spasming. Jay’s eyes were shut tight. And when I softly pinched a nostril, he smiled.

I reversed myself on top of him and he moved his hands up my sides, over my breasts. More unintelligible questions into my neck. I watched the mouse’s body liquefy and slip beneath the blanket chest. Gone. I waited for the snap. Waited. Waited. The TV showed a gremlin spinning in a blender.

Suddenly we heard Suzanna upstairs screaming from her bed.

“Fuck,” Jay said, adjusting himself away. “Don’t go anywhere.” And he staggered up the stairs to her room. I sat and stared at the blanket chest, waited for Jay to start shouting. I imagined Suzanna’s tiny pink palms without fingers, waving side to side like horrible bald flowers. Saw them reaching out for Jay.

But I heard nothing. And so I crept over to the chest and saw the peanut butter sitting undisturbed on the cheese. I went up to Henry’s room and stood over him. Waited. I stopped the sound of my own breathing to hear his, to watch his chest rise and fall like it was supposed to. I wanted to wake him and kiss all his fingers, count his toes with my lips. Instead I sat in the rocking chair and watched the crack of hallway light beneath his door. I waited for a flash of movement. I waited for Jay, or something else, to squirm into the room and gnaw at our skins. 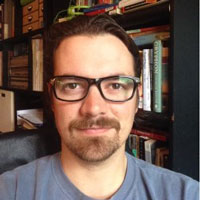 Ben Morris recently earned his PhD in English from the University of North Dakota. He has had fiction or poetry appear in Lake Effect, drafthorse, Digging Through the Fat, North Dakota Quarterly, and others. He is currently a full-time English lecturer at Appalachian State University. He lives in the Blue Ridge Mountains with his partner and two children.