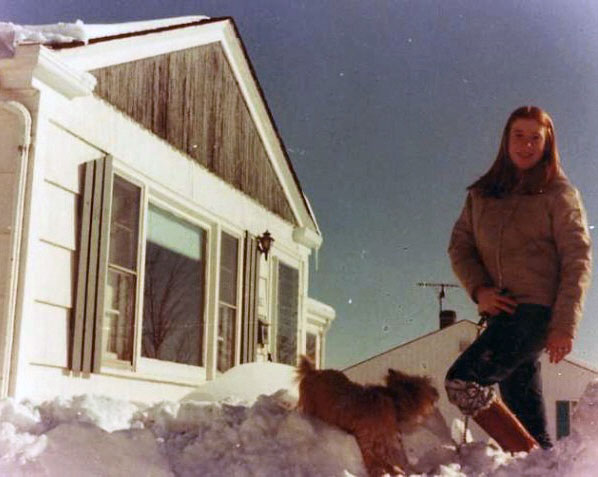 YVONNE IN THE EYE OF DOG
by Kathryn Kulpa

If God looked for Yvonne would he find her? If God looked down, past stars and satellites, through storm clouds thick and grey as dryer lint, would he see Yvonne in a stolen van, Yvonne in a darkened shopping plaza with Ma’s Diner and A-1 Hardware, Crafts Basket and Pets Plus?

Yvonne is down on options, down on her luck. Listening to the sighs and snores of her dog asleep in the back seat, the beat of rain on the roof. Her world the smell of wet dog. Her face in the mirror, hair wild, curling in the damp. Everything about her seems high-contrast, vampirish. Face white, except for that bruise her cover-up won’t cover. Tired eyes. White eyeliner is the trick for that, Teena had taught her. No white eyeliner in Yvonne’s make-up bag. No black, either. Almost out of tricks. She pats more cover-up on her eyelids, feels the oils in the makeup separate.

Always something red and raw to show through.

Yvonne likes to think that in this whole world not one person knows where she is right now. A parking lot, a strip mall, two hours out of Little Rock, the exit she took when she started losing time, twitching awake as she drifted across lanes. A sign said Clarksville and that made her think of housecleaning with her grandmother, the radio set to the oldies station because music made work better, songs about last trains to Clarksville and midnight trains to Georgia, songs that made escape seem possible. Maybe she’s in Clarksville now, 4 a.m., windows cracked, sweat trickling down her neck, diverting around her breasts like some creek that’s been dammed. She shifts her bra straps, remembering Teena’s other tip about always making sure nothing’s popping out on one side that’s not popping on the other. This was important, the power of symmetrical cleavage.

If God looks for Yvonne will he find her?

Teena’s hands steady while Yvonne’s shook, Yvonne holding the flashlight while Teena changed license plates in the dark. Lucky I never turned these in, Teena said, throwing Wayne’s plates into the graveyard of lost lipsticks and crushed pop cans under the seat of her junked car.

Teena sent her on her way with a cocoa tin full of tip money, two peanut butter and jelly sandwiches, and a 12-pack of Diet Coke. You should of poured gasoline on the bed and torched the bastard, Teena said. Like Farrah Fawcett in that movie.

The diner opens at five. Yvonne feels she knows this diner. She likes to think that someone won’t show up to work this morning and she’ll put on an apron and get hired, just like that. In the movie of her life this would happen.

She checks the cocoa tin, where a little Dutch boy holds hands with a little Dutch girl. She’s still got half a country to cross. Yvonne tears a sheet off her Word-a-Day desk calendar. Today’s word is xerophagy: a restricted diet, as of bread and water. She has enough for toast and coffee. A cold nose nudges against her armpit; she looks down into the broad and worried face of the dog.

Yvonne finger-combs her hair, changes her mind, pulls it back in a messy ponytail. What would Teena do? She needs advice but there’s no one to give it, no one except the dog. She can’t ask the dog if she looks all right. She always looks all right to the dog. She’d like to live in a world run by dogs.
Image credit: Helen Kulpa 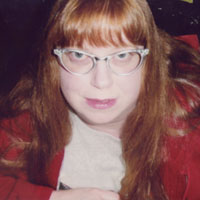