Some still see the shadow of the earth’s other moon,
a ghost satellite over a ghost tide

before one light was absorbed into the other.
No silhouette hides in the rushes,

everything illuminated
or submerged.

I saw a woman walking in Paris once.
She wore your hat and your old expression.

Those were the days of sitting in the Swedish cafe,
strangers huddled in opposite corners,

raising their glasses to each other without knowing it,
an oblivious toast to the unnoticed world.

Gypsies handed roses to tourists on the steps,
their muteness abandoned once they piled into the BMW.

In other languages we are completely different people.
Our versions drift past each other, unable to speak.

In panels of glass only words are backwards.
The rest is readable, but we miss the difference—

if today is the original or another dim copy,
the same songs playing from the car windows in the street,

the stand-ins still shadows of the people they resemble.
Who will be the body thrown over the cliff?

In the mountains of Spain, I saw a two-headed dog,
but a lover told me it was probably just two animals fucking.

No living body is completely symmetrical.
One breast hangs a little lower than the other,

one hand is more dexterous, one braid lays too long.
One eye gazes further into the distance.

Two girls with the same name cross each other on the path,
skipping aimlessly over the rocks in opposite directions.

They stand on the hill, taking turns looking through a pair of binoculars,
staring to the point of seeing nothing at all.

At first the picture comes in pieces:
the giraffes and the elephants, the inexhaustible sea sponge.

I’ll climb the boy mulberry tree,
and you climb the girl

and when we descend, our mouths will be bloody,
a nectar not found in the stand-alone cactus.

Across the ocean,
we both have the same thought.

We play the same note on our old pianos,
but the sound caught on the air is different.

This only is clear:
there are contrary people inside your one face. 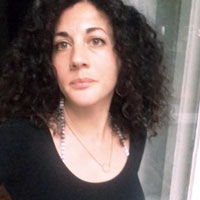 Kyra Simone is a writer and editor based in Brooklyn. Her work has appeared or is forthcoming in The Atlas Review, Black Clock, The Brooklyn Rail, Conjunctions, Little Star, Prelude, Vestiges, and The Wrong Quarterly, among other journals. She is a member of the editorial collective at Ugly Duckling Presse.