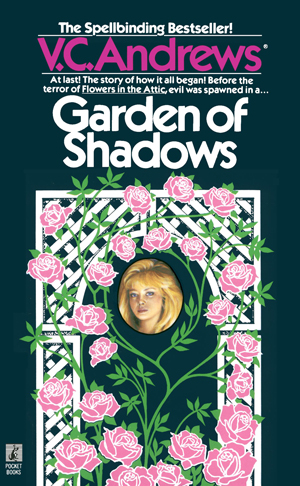 SPYING THROUGH THE KEYHOLE:
A Novelist Grows Roots in the Glamorous, Twisted World of V. C. Andrews
by Emma Sloley

My sisters and I knew they were trash. That was part of the appeal. Virginia Andrews’ best-selling Dollanganger series (described by Wikipedia as “Gothic,” although I think that might be a tad generous) was so deliciously lurid in its themes and so over-the-top in its execution that it was like overdosing on the dessert buffet at the ersatz German smorgasbord restaurant my family used to go to in the 1980s. It made you feel bad afterwards, but damn, it was fun at the time.

For the uninitiated, if it’s even possible there exist humans unaware of Flowers in the Attic, the series concerns a family called Dollanganger (in hindsight, perhaps a sly play on doppelganger?) who, for reasons I can’t and don’t even care to remember, end up living with the mother’s parents in a big old Gothic mansion in Virginia, where the mother agrees to lock her four children away in an attic for an unspecified stretch of time. (Spoiler alert: it turns out to be years.) This is all a scheme of the extremely evil grandmother, who for vague, never satisfactorily explained reasons hates her grandchildren and wants to make sure her husband, their grandfather, never knows of their existence. Totally normal. Oh, and the grandmother is also into whipping people—including her own grown-ass daughter—as punishment for transgressions. The casual sadism that so shocked me as a teen feels now like a foreshadowing of the Fifty Shades phenomenon that would similarly shame-captivate readers three decades later. 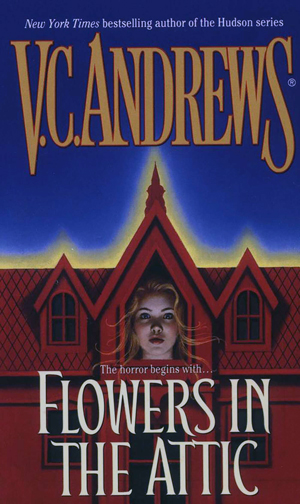 The prose is not only purple—fragrances evoke “a musty, perfumed garden on a moonlit night somewhere in the Orient;” paper flowers are described as “limpid dark pools of iridescence,” and everyone’s hair is “flaxen”—but peppered with odd, almost archaic language. “Good-golly day!” and “golly-lolly!” characters exclaim. The children’s father (conveniently removed from the picture early on), addresses his wife thusly after a day at work: “Do you love me? —For I most certainly love you; did you miss me? —Are you glad I’m home? —Did you think about me when I was gone? Every night? Did you toss and turn and wish I were beside you, holding you close? For if you didn’t, Corrine, I might want to die.” In this world, even the good guys are creeps.

Andrews is so unapologetic in her glorious, adjectival, don’t-give-a-fuckness, and takes such glee in the baroque suffering of her characters, that her writing transcends trash and becomes a luminous thing of wonder. As luminous as the platinum, flaxen hair of the angelic, doomed Dollanganger children.

The covers, at least in the Australian editions, featured a sinister black flap with a keyhole cutout through which peeped the titular flowers (an extended metaphor for the four imprisoned children), whose pale, Aryan beauty is described by the author with a rapturous enthusiasm that in hindsight was kind of disturbing. The message was clear before you even cracked the spine: this was not a book for brunettes. This was a book for the ethereal blondes of the world, whose very beauty was a curse that could only ever lead to their downfall.

We were a reading family. On weekends, the big rambling Edwardian house in which we lived would fall silent as the women of the household—my mother, my three sisters and I—retreated to their favorite corners to turn pages and sip huge mugs of tea. (Dad was the only one who didn’t read. Then, as now, he would always be off somewhere, wiry and taciturn and completely untouched by the need to live vicariously through fiction, whistling while chopping things down or building them up, like a kind of gentle Australian Marlborough Man.) 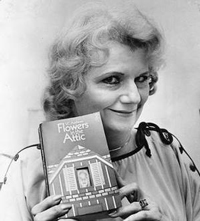 My parents were, especially for the era, permissive and open-minded, both teachers and staunch believers in free speech and childhoods unrestrained by parental sanctions. My dad, the famous non-reader, had even done a stint as a librarian. The idea of censorship was anathema to them. We were allowed to read anything we could get our hands on: Lolita, Lady Chatterley’s Lover, Slaughterhouse Five. There was no fear that such stories—each subversive for its time—were a bad influence, because how could great literature ever be a bad influence? Yet I remember their unease about the Virginia Andrews books. When Flowers in the Attic fever was at its height, they must have come across the books at their own schools and perhaps been alarmed at the corrupting grip they had on burgeoning female minds. (Or, it only now occurs to me, perhaps they were more alarmed at the idea that their daughters, whom they had painstakingly reared to be erudite and intellectually curious, would suddenly develop such bad taste.) I don’t recall them outright banning the reading of the five-book series at home, but my sisters and I got the message nevertheless. These stories were dangerous, unwholesome. There was something about them that made adults deeply uncomfortable, and so, of course, that just increased their dirty allure.

Beyond the obviously titillating details—neglectful mothers, wicked grandmothers, emotionally abusive men and incest galore—lay the real appeal of these thick volumes. They offered a vision of the world that was racier and more glamorous than anything in my happy but boring sphere of existence. As a shy teenager living a hopelessly sheltered suburban life in Melbourne, I was ravenous to live vicariously through narratives that flouted society’s stuffy rules and boundaries. The more over-the-top the telling, the better. Just as little children want to believe in Santa and the Easter Bunny, I wanted to believe in a world where mothers allowed their inconvenient children to be locked in attics, blue-rinsed grandparents were into kinky BDSM and brothers and sisters found solace in each other’s arms. (It helped that I didn’t have a real-life brother when it came to not being grossed out by this plot point.) I didn’t want to live in such a world, of course, but to peek in at it through the keyhole. 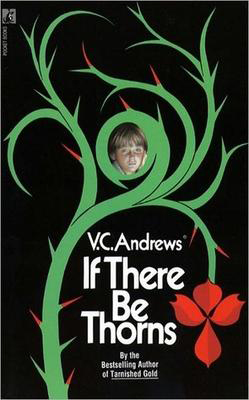 I was so smitten that I would finish the last book and go right back to the beginning of the tattered series and start again. (The titles are so glorious I feel compelled to list them here in full: Petals on the Wind, If There Be Thorns, Seeds of Yesterday, and Garden of Shadows.) We re-readers are used to being scorned and misunderstood. Our obsessions recall the bromide about how insanity is doing the same thing again and again and expecting a different result. But of course that’s not why I, or any of us, reread: I not only expected the same result, I demanded it. I longed to feel that delicious shiver again, that rush of adrenaline at being plunged into V.C. Andrews’ glamorous, twisted world. Even her characters understood the comfort of being transported to another world through the pages of a book. Cathy, the series’ heroine, and her brother Chris get through their ordeal in the attic by reading the dusty volumes they find hidden in trunks. No sexy trash for them, though. They devoured Dickens, Thomas Hardy, Shakespeare, Eugene O’Neill, Charlotte Bronte.

Something about her decision to name-check those classics makes me suspect that Andrews had her own complicated relationship to literature. Perhaps she subscribed to the idea that part of a balanced reading diet is consuming both high-brow and low-brow books, especially if the latter have something to teach you about storytelling. And if you overlook the flowery prose and prurient subject matter of the series, it’s obvious she had a sophisticated understanding of plotting, suspense, and foreshadowing, all skills I’ve endeavored—and often failed—to master in my own life as a writer.

It’s easy to dismiss the series as irredeemable tripe, to understand why parents might consider it unsuitable reading for impressionable minds. But I stand steadfast in my affection for them. There was a kind of dark magic to those books. Every time in my life that I’ve mentioned them, I’ve noticed the eyes of female friends light up as they are transported back to their own relationship with those subversive, hallowed pages. It’s a kind of secret sisterhood, a cult of guilty pleasure. Maybe it reminds us of a more innocent time, when there was still the possibility of being corrupted. 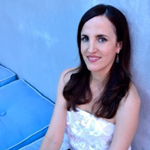 Emma Sloley is a travel journalist and fiction writer whose work has appeared in Catapult, The Tishman Review, Lunch Ticket, Travel + Leisure and New York magazine, among many others. She is a MacDowell fellow and has just completed her debut novel, Disaster’s Children. Born in Australia, Emma now divides her time between the US, Mexico, and various airport lounges. You can find her on Twitter @Emma_Sloley