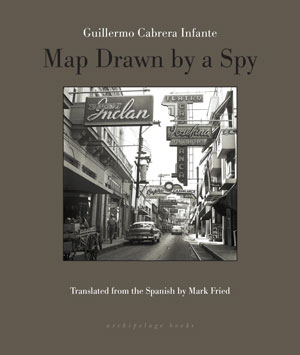 Posthumous novels are both a joy and, sometimes, a let-down. Left behind by an author whose polished work stands as a testament to the full capacity of his or her mind, the words on the page surface at first like an extension from the past. This one last bit of evidence left for us to find. The posthumous novel should be examined and praised as a rare object—hidden in a vault, locked in an old suitcase, tucked into an envelope—and given a small bit of license for being not quite the full body of work its author intended.

At least, this is how I will approach and critique Guillermo Cabrera Infante’s third posthumous novel Map Drawn By a Spy. This book is a psuedo-memoir, a recounting of the several months Infante spent trapped in post-revolution Cuba. He was born in 1929 to Communist parents who moved the family to Havana in 1941. Infante was a supporter of the revolution and even knew Fidel Castro when he was a thug in the UIR (Unión Insurrecional Revolucionaria). Later, Infante was named cultural attaché to the Cuban embassy in Brussels. He wrote short stories, edited a literary supplement for a Cuban newspaper (that was later shut down by the government), and wrote film criticism under the pseudonym “G. Caín.”

In 1965, while working in Brussels as cultural attaché he received a phone call that his mother was dying in Cuba. He flew to Cuba, attended her funeral (his mother had died of an untreated ear infection), and within a week, hoped to return to Brussels with his two daughters. The night of his intended departure he was detained at the airport and ordered to return to the Foreign Ministry. The week turned into two, then a month, and eventually, after finagling a transit visa to Spain for the debut of his novel Three Trapped Tigers, Infante left Cuba for the last time on October 3, 1965. He tried to remain in Spain, but was ultimately exiled to the United Kingdom. He lived in London, became a British citizen, and remained there until his death on February 21, 2005 at age 75. 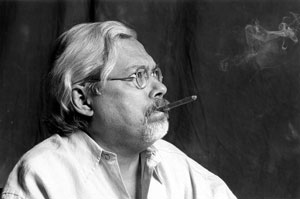 Map Drawn By a Spy takes place during those months Infante was detained in his homeland. It is a narrative about an unnamed Cuban native and diplomat (the author loosely disguising himself) who returns home to Cuba for his mother’s funeral and is detained for four months before he can leave and return to Europe. The revolution is just beginning to transform Cuba into a kind of prison state. Everyone is either watching or being watched. You are either a revolutionary (and therefore loyal to the government) or a counter-revolutionary (and probably subverting the government and the revolution in some way—perhaps intellectually, politically, or in terms of sexual orientation). Everything is rationed. Everyone is supposed to follow the rules, the expectations—of gender, class, government hierarchy. And the rationale is clear: everything within the state of Cuba is being slowly consumed by the dictatorial power of one person, Fidel Castro.

In a 2000 interview with Oscar Hijuelos for BOMB magazine, Hijuelos asked Infante about his relationship with Castro. Infante recalled one of Castro’s early televised speeches in which he claimed the revolution would not “be like Saturn and it won’t devour its children” (a reference to Roman mythology in which Saturn cannibalizes his offspring to secure his own supremacy). Infante retorted: “But it will devour its grandchildren instead.” He went on to explain to Hijuelos:

It was pathetic but it was also prophetic. Saying things like that contributed to the banning of the magazine [Revolución] some time later in 1961. Enough was enough when [Castro] closed the magazine and announced his Stalinist credo: “With the Revolution everything, against the Revolution nothing.” And it was only for him to decide when and who were against or in favor of his Revolution. It took me years to extricate myself because you don’t leave your country as if leaving the party—which was over anyway.

In much the same way that Infante was slowly hunted and persecuted by Castro, the unnamed protagonist of Map Drawn By a Spy is also detained and pursued by a bureaucratic system designed to entrap dissenters and punish counter-revolutionaries. After several attempts to meet with Raúl Roa, the minister of foreign relations, or Arnold Rodríguez, vice-minister, so that he could somehow resume his trip to Brussels, the unnamed protagonist realizes he is being punished:

The incident made him finally accept that Roa would not see him, that Arnold’s call to the airport about an interview with the minister was an excuse as patently false as the one they had given the Swiss ambassador. But if that was the case, why had Roa’s name and an interview with him been offered as justification for aborting his trip? Besides, why had they waited until precisely the very last moment to block his return to Brussels? Who, if not Roa, had been behind it?

And like Infante, the unnamed protagonist is also heavily burdened by the loss of his country:

Finding himself face to face again with what Lisandro Otero would call revolutionary reality, the odd incongruity hit him: he was in his own country, but somehow his country was not his country; an imperceptible mutation had changed people and things into their mirror image; everyone and everything was there, but they weren’t themselves, Cuba was not Cuba.

Much of Infante’s novel/memoir (only Infante himself could tell how much of it is fictionalized) concerns the loss of his homeland as a betrayal of the ideals which he first believed were necessary for the success of the revolution—freedom from Batista’s oppressive military regime, independence from overpowering colonizing powers like the United States, and a new license for freedom of expression. But gradually the revolution becomes swept up in its own hypocrisy and both Infante and the unnamed protagonist understand he cannot be a true writer if he is not allowed full range of expression:

But for all the subversive and dissenting criticism Infante scatters throughout the book, this novel is also filled with plenty of banality. The seemingly incessant waiting and lack of work or useful pursuits gives Infante plenty of license to womanize and (presumably) forget to call the wife he left back in Brussels. There is a side to this book more concerned with name-dropping (in fact, the end of the book also includes a handy glossary of all the people Infante met during his time in Cuba) and perhaps self-assurance of his own importance. It is, at times, entirely distracting from the direction of the story, but then again I’m not sure Infante intended the novel to be read widely, or even if he intended for the novel to have a specific direction. In fact, the title Map Drawn By a Spy, is more a romantic phrase than an indication of the life of the protagonist (it is referenced late in the book when the unnamed protagonist meets Alejo Carpentier, another Cuban novelist, who has a map drawn by an English spy hanging on his office wall; it is also referenced in an epigraph from Infante’s own novel View of Dawn in the Tropics).

At the end of their interview, Hijuelos asked Cabrera Infante about his legacy and whether he was interested in being remembered in a hundred years. Cabrera Infante coyly deflected:

I am convinced that in a hundred years time the only writing remembered in Spanish will be Borges. I told him so at our last dinner at the Brown’s Hotel, telling him he shouldn’t worry about getting or not getting the Noble Prize. I then added, “Of course you’re not interested in the money from the prize.” And he smiled and said, a sudden Argentine: “No crea, no crea.”

Another instance of name-dropping, perhaps, but Infante’s voice of dissent defined his career as a writer and a critic. He would not allow the revolution to swallow him whole and, perhaps to mourn the demise of his country and the consequences of the revolution, he wrote a chronicle of the last time he spent in his homeland.

OBLIVION, a novel by Sergei Lebedev, reviewed by Jacqueline Kharouf

THE SEVEN MADMEN, a novel by Roberto Arlt reviewed by Jacqueline Kharouf