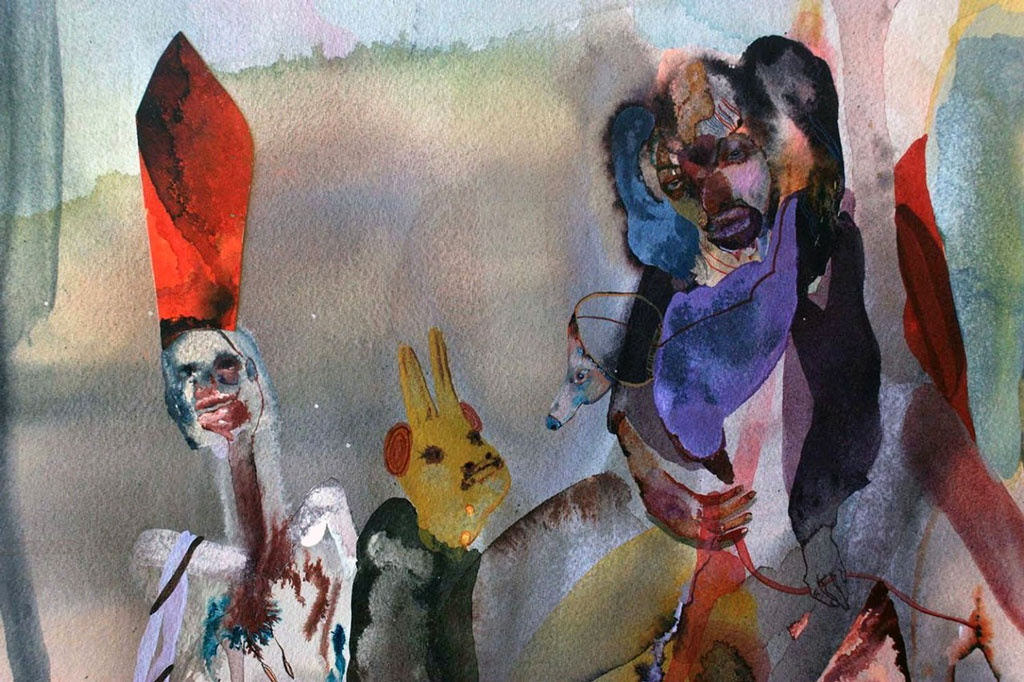 NO REPEAT CUSTOMERS
by Josh Wagner

Early one Sunday morning Dean and I stumble past the First Episcopal Church of the Holy Spirit, the only church in town old enough to have God’s own handprint cemented in the walkway. We’ve been up a while, still not quite ready to pass out. It’s the corkscrew tail end of hour six or seven where synchronous waves start desynchronizing. The afterglow before the crash. Our general consensus is what the hell, so we sway on over through the courtyard where crocus buds pepper juniper hedges and murky stained glass islands float on seas of dried blood brick. A sign says welcome. The door creaks as it swings.

The last thing I see before going inside, carved into the arch in vaguely medieval script, are these words: A riddle: How are we desperate and empty half of the day, but content and satisfied the other half?

We stand in the warm, orange entryway, facing a cherry wood box on a pedestal where a laminated index card suggests we please insert our tithes and offerings through the tiny slit. I see no lids or doors. How do they get the money out? Once upon a time gift-giving was a ritual of reciprocity. A way to spice up commerce with warm, fuzzy feelings. Giving a gift was investing in favors. Maybe this is why the church hordes wealth, as a kindness, to prevent burdening poor souls with the weight of obligation.

We pay our dollar and sit in the back. I should mention we’re the only customers. The room is empty other than the priest. A church without a congregation.

He’s a little on the young side, the priest. He’s buried his face in liturgy. He expounds his message in mutters, monotone, and monotempo. Reads his minutes like the chairman of a board meeting. It isn’t exactly a sermon—at least not any kind of sermon I’ve heard before.

Not that my past experiences were exactly fire and brimstone—I mean, that at least would’ve been something. The congregation where I grew up tore each other down with a battery of teeth, grinding knives in backs, eye-plucking beaks, and first stones cast. Insinuated gossip and passive aggressive witch hunts. Like the entire social scene was a sort of passion play to demonstrate how bad hell could get if they ever brought in some real talent.

It’s the same in all religions, I guess. Except for Buddhism. Buddhism’s just a conspiracy to keep us all breathing.

The priest drones on for twenty more minutes about some mysterious council. Finally closes his ledger and asks us to open our hymnals to some page.

I flip through: God is Pretty Okay I Guess, All You Christians Make Some Sounds, How Much Does the Lord Weigh (In Ounces), Boilerplate of Grace. I raise my hand. I’m ignored. The priest begins to sing, barely above a whisper. I get up and walk to the back of the church and browse the pamphlets and bulletin boards. Events scheduled for every day, with plenty of volunteer signatures to go around. Maybe that’s where everyone is. As if life doesn’t have enough mysteries. Where do all the socks go? Will I die inhaling or exhaling?

I sit back down next to Dean and the priest decides to step off stage and come say hi. He doesn’t stop singing until he’s inside pantsing distance. We get a sampler plate from the catalog of looks priests are required to master before graduating from priest school.

“You can still sing.”

He tells us God delights in spontaneous bursts of creation, while to understand a thing is to be one step removed—a vessel for knowledge rather than an outpouring of the creative multiplicity of all which needs not be known.

“Tell us something we want to hear,” Dean says.

“Dogs will lick up the blood of tyrants, the wicked, and those who abuse the poor.”

“It is wise to build a wall, but foolish to repair one,” the priest says.

Then he asks us why we’ve come.

“Ours is a cosmos of fluctuating currency,” the priest says, smiling. “The best way to love God is to love people, not by subscribing to any of the big box brand soul scrubbers.”

Have you ever been so high you feel sober?

“Everyone who walks through these doors shall be raptured by sermon’s end,” the priest says.

“We know we’re doing our job right when we put ourselves out of business.”

Now open the gates and enter heaven. In with joy, out with obligation.

I look over my shoulder. The words on the arch. How are we desperate and empty half of the day, but content and satisfied the other half? I feel the walls jiggle and hum until they melt away.

I want to tell you the answer, but first I have to take a deep breath and hold it for as long as I possibly can. 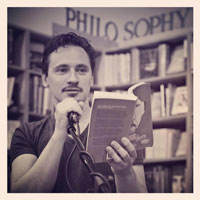 Josh Wagner is currently on the move, trying to live in a different country every three months. He’s written four novels (including Shapes the Sunlight Takes, Smashing Laptops, and Deadwind Sea), the collaborative novella Mystery Mark, three graphic novels (notably the award-winning Fiction Clemens), a collection of plays titled Bleached Bones, and a book of shorts called Nothing in Mind. His work has been published by Cafe Irreal, Not One of Us, Medulla Review, Lovecraft eZine, Asymmetrical Press, and Image Comics. More at www.joshwagner.org