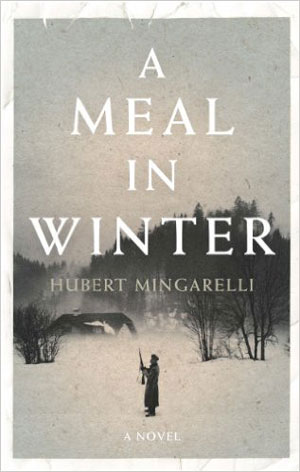 A MEAL IN WINTER
by Hubert Mingarelli
translated by Sam Taylor
The New Press, 138 pages

A Meal in Winter by French author Hubert Mingarelli is a subtle book that quietly but methodically stalks the reader’s sympathies. It does so through a beautiful, spare prose style that begins with the first line: “They had rung the iron gong outside, and it was still echoing, at first for real in the courtyard, and then, for a longer time, inside our heads.” This is lovely writing (deftly rendered from the French by translator Sam Taylor, himself a novelist)—yet a bit ominous, like something that can’t be escaped. Later, setting the scene for the winter’s walk that takes up much of the first part of the narrative, he writes: “A pale sun hung in the sky, as distant and useless, it seemed to us, as a coin trapped under thick ice.” Trapped. What is trapped? Or who?

But in this review, there’s no point in being subtle about the book’s plot: it’s about three rank-and-file German soldiers who go out into the woods one cold, snowy winter day during World War II for one purpose and one purpose only. And that’s to hunt for Jews who might be in hiding.

There’s a reason, however, why this book is subtle–and a reason why it’s absolutely masterful. Their mission is not the whole story. They go out to hunt for Jews because they cannot bear to remain at their camp where they would have to shoot and kill actual Jews. They much prefer to move about aimlessly in the woods, far from the camp in rural Poland, in a half-hearted attempt at finding another potential prisoner and putting off the senseless killing for which they have no appetite. The book is the story of a journey toward the meal of the title, but really it’s a morality tale—from a vantage point seldom considered.

As the author said in an interview posted on the website of the British bookseller Waterstones, “The question that stayed with me the whole time I was writing this story was: what about me, would I have obeyed orders or refused?” 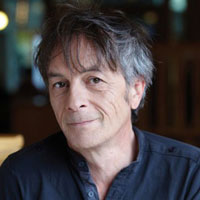 To be specific, the character missing his son is Emmerich, the one lamenting the embroidered snowflake is the unnamed narrator. The book contains a third major character, Bauer. These are the three men out in the woods on a cold winter’s day, choosing what they believe to be the lesser of two evils.

Some readers, including this one, avoid reading promo copy before beginning a book. And hence, in the early sections of the slim volume, the reader has an idea of what the story might be about, but is unsure—and wondering. Bits of plot emerge slowly, and with it, the men’s characters. Early in their journey, Mingarelli writes: “We’d found some of them inside the haystacks during the spring.” A few lines later, Bauer asks, “What if we don’t find any?” The men wonder how long they need to look for this as-yet unnamed quarry.

Emmerich responds, “Let’s wait until dark, at least. So it looks like we tried.”

So it looks like we tried. That kind of line abounds in this book, which was nominated for the 2014 Independent Foreign Fiction Prize.  Furthering this sensitive characterization, Mingarelli introduces in an early chapter one heartbreakingly beautiful plot element that’s minor but powerful: how Emmerich’s young son is faring as he grows up while his father is far from home. He asks advice of his two comrades about dealing with particular parenting challenges and once he does, this unseen son becomes part of the other two men’s lives. “We walked in silence, each lost in his own thoughts. But Emmerich’s son walked with us now,” the book reads. Later, the narrator remarks that he imagines the son “knocking on the door” of Emmerich’s conscience. Lines like that fill the reader with a sense of loss and poignancy but also with a desperate desire to keep reading, to figure out where this story is going.

The inclusion of Emmerich’s son as a quasi-character in the book is a deft touch, even though he does not actually appear in any of the scenes, since he is far from his father’s assigned post at the concentration camp. The son not only humanizes a Nazi soldier, he also prompts the reader to imagine Emmerich’s inner life, to imagine Emmerich’s thoughts drifting every few seconds or every minutes back to his son. This makes perfect sense when you consider what Mingarelli, the author of several short story collections, told Waterstones about what’s left unsaid in his novel: “I have a feeling that life is generally made up of what’s unspoken. And in my novels, I always try not to explain things too much, and to give the reader the chance to form their own opinion.”

The book’s unnamed narrator shares quite a bit of what’s unsaid, his thoughts unspooling like a monologue with an audience of one, himself. Mingarelli writes of the narrator’s conflicted mind: “Because if you wanted to know what it is that tormented me, and that torments me to this day, it’s seeing that kind of thing on the clothes of the Jews we’re going to kill: a piece of embroidery, colored buttons, a ribbon in the hair. I was always pierced by those thoughtful maternal displays of tenderness.”

Mingarelli is likely to be new for many American readers. He is the author of Quatre soldats (Four Soldiers), which won the Prix de Medicis, and several short story collections. A Meal In Winter is Mingarelli’s first novel to be published in English. Which seems somewhat surprising, given the book’s profundity and sensitivity, but more importantly, it augurs the thrilling prospect of future English-language translations. The book was first published in France in 2012 and the English translation, by Taylor, was published in 2013 by Portobello Books. New Press has now published this American edition.

The novel moves slowly toward the meal of the title: a meal that, on its own, arguably presents a morality tale within the larger morality tale of the novel. One-third of the way into the novel, the three soldiers choose to camp out for a while in an abandoned house once they’ve managed to locate a Jewish man who had been hiding in the woods. After stationing the prisoner in a corner, they begin preparing a meal when suddenly a Polish man bursts in. They don’t share a common language with the man so much about him remains unclear, although it quickly emerges that he possesses a savage hatred toward Jews that the three Germans cannot match—and don’t want to. What is clear is the palpable tension that fills every moment of the scenes of dinner prep and of the meal itself. As the narrator puts it once dinner is ready, “Thus began the strangest meal we ever had in Poland.”

The reader will tear through the pages covering the windup to the dinner, and the wintry meal, with its twists and turns, because Mingarelli is adept at building tension, but this reader needs to be sparing in what details are included here; Mingarelli takes the narrative to unexpected places. And the tension he teases out between the German soldiers and the Polish man underscores the novelty of his morality tale. Could there be anything worse than a Nazi soldier? How about a low-level conscript who was just following orders? Could there? Mingarelli is going to let us decide that one for ourselves.

Jeanne Bonner is a writer and journalist based in Atlanta, Ga. She’s contributed reporting to The New York Times and CNN. Her creative writing, including nonfiction essays and book reviews, have appeared online at Literary Hub, Catapult, Consequence and Asymptote Journal. She received a Bachelor’s degree in Italian Literature from Wesleyan University and has an MFA in Creative Writing from Bennington College.