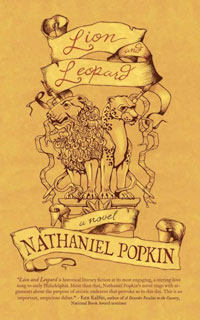 A CONVERSATION WITH AUTHOR NATHANIEL POPKIN
by Roberta Fallon

Nathaniel Popkin’s new novel LION AND LEOPARD is set in early nineteenth Century Philadelphia, and features historical figures such as Charles Willson Peale, Raphaelle Peale, and the German painter John Lewis Krimmel. A historical incident sets the plot in motion—a mysterious death at a mill pond— and the novel’s descriptions are so earthy you can almost smell the cowpaths. Yet Popkin says Lion and Leopard is not historical fiction but rather a contemporary piece that deals with universal themes of originality, duplicity, family, friendship, power struggles and unexpected twists of fate. Indeed, the dialogue-rich writing uses slang that you might overhear on the streets today. And the issues are familiar. I sat down with Nathaniel earlier this month to ask him about the book.

[Editor’s note: You can preview a sample chapter of Lion and Leopard, “The Dig“, in Cleaver Issue No. 1.]

I was reading Gary Nash’s First City, which deals with characters in early Philadelphia, including Krimmel and George Lippard. I became interested in both. Both die tragically at the height of their careers. I also read Anneliese Harding’s biography, John Lewis Krimmel. Krimmel was thirty-two when he died. In his paintings he captured the street as it is, all types of people. No American had ever done that before, and I felt a connection to him. In 1821, he’s elected president of the Society of American Artists and then he gets a commission to paint a major historical painting on William Penn; his career is taking off, and on July 15, 1821 he dies, drowns. I knew I wanted to turn it this into fiction.

What are your other influences?

Orhan Pamuk’s My Name is Red, a novel that opens with a drowned painter. It’s a first person narrative about a lost art world. My influences tend to be literary, not historic. A wide range of other books, including Bolaño’s Savage Detectives, influenced this one.

How did you put the story together?

I didn’t quite understand the connection between Peale and Krimmel’s death until I went to Adam Levine, the keeper of the city’s water history, and he helped me figure out where Krimmel drowned. It was literarily just up the lane from Peale’s farmhouse Belfield, which still exists. So I saw the proximity. Then, in reading Peale’s journal, where he details all kinds of things from farm inventories to conflicts with his children, I discovered the pages of Peale’s journal for the dates around Krimmel’s death were missing. No mention of the death of a rising star, who he certainly knew. I found that interesting, mysterious, intriguing.

Tell us about your process.

I started working in 2007. I bought anthologies on all the people who would become my characters and literally surrounded myself with prints of the paintings. Then I asked an artist friend to look at the work of these painters and help me discern their personalities.

The Peale family is particularly interesting, and they’re all a little nuts, especially the father, Charles, but the son Raphaelle, the still life painter, he’s a basket case.

Raphaelle Peale was a very unusual man for the time. His work, although in still life, is really about himself. Those bruised apples: that’s him. They are full of his damaged soul. Charles Willson Peale was a mad man who throughout his life struggled to keep his passions in check. Rembrandt Peale was, on the other hand, very serious and almost purely dogmatic. 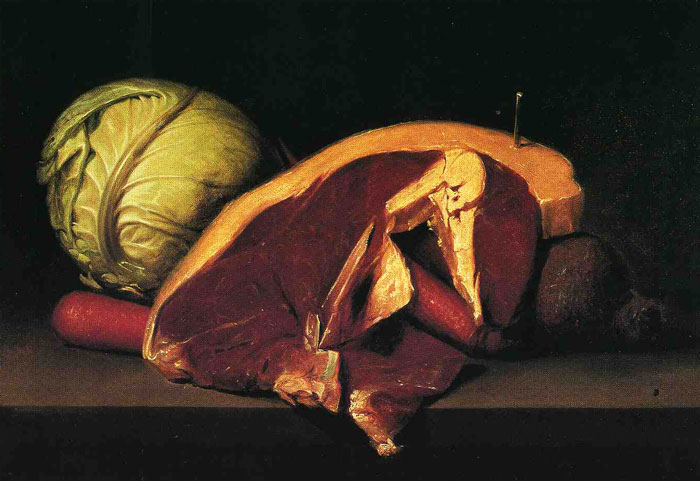 Your novel has a lot of dialogue, and the use of slang seems more akin to our time than to the 1800s.

In my novel, dialogue is action. Zadie Smith is dialogue-y; Roberto Bolano, too. I like contemporary fiction. Lion and Leopard was never intended to be an historical novel. It was meant to be contemporary. Its ideas about fiction are contemporary.

You are an accomplished non-fiction writer. Why a novel?

I’ve written two other novels, but they are still unpublished for one reason and another. My love is literature and I thought I ought to be able to write fiction. (I have also published some flash fiction.) I could have written this book as history or even as a quest to solve a mystery, but the tragedy of the story resonated to me as fiction.

How did you become a writer? Were you an English major?

I was a philosophy major. I’ve never taken a writing class—no creative writing, no journalism. I’m self-taught. As a writer, I’ve always been an outsider. The first thing I published was Song of the City, a book of literary non-fiction. That book pulled me into becoming a writer as a full time career.

Were your other novels set in the past like Lion and Leopard?

No, they were contemporary, partly set in Philadelphia. One was about a Wharton professor who meets a woman through notes left on a SEPTA regional rail train.

Lion and Leopard is full of artists and writers. Any writers or artists in your family?

I grew up in Bucks County along the Delaware. My family is from Trenton. My dad is a dentist—probably one of the great artisans of teeth. My mother has worked the front of his office for years. My father’s family was filled with lefty intellectuals. My mom’s father was a self-taught capitalist and entrepreneur. His bookshelves were filled with biographies of Ford, Carnegie, etc. My sister has been a journalist, in TV news. She was once a practicing artist, but has dropped it. My family has always been creative.

Do you make art, in addition to writing?

In 1988 I went to Speos, in Paris, to study photography. The school was founded by one of Cartier Bresson’s printers Pierre-Yves Mahé in 1984. There, I learned it all—how to use the dark room, everything. This was just as they were bringing in the first computers to the school to teach digital. My time at Speos gave me an opportunity to roam around the city and practice street photography, something I’ve been doing ever since—it’s what formed that connection in my mind to John Lewis Krimmel. There is a photography section on my website with three photo essays and a fourth coming soon.

Have you exhibited your photos?

I’ve shown in a gallery across from Christ Church on 2nd Street in Philadelphia, and I showed in Paris while I was in school.

Do you consider yourself a local writer?

So many writers are the product of place. They respond to and write from a perspective of place. I suppose I’m no different. So call me a Philadelphia writer, but not a “local writer”—that seems to me a term that’s used to label anyone not cool enough to live in New York.

What are you working on now?

Mr. Mosaic, a novel. I’m taking notes now, and hope to start writing in January—a book that ought not take five or six years to write. It’s about an architect who becomes obsessed with a vacant lot, which becomes his undoing.

Roberta Fallon is the co-founder of theartblog.org. She has written about art for Philadelphia Weekly, Artnet, Art Review, Art on Paper, The Philadelphia Inquirer and Art and Auction, and has taught and been a visiting critic at Tyler School of Art, St. Joseph’s University and Cranbrook Academy of Art.