Sawtooth sky reins in its pomegranates
and the carnival shuts down.
We duck behind the House of Horrors

for in-touch, downright, face-to-face clarity.
The ground’s a popcorn mess,
stepped over and on,

near a chain link fence to keep out
what inevitably wants in:
a man with a cartoon axe,

then a lady with a halo for a head,
unflanked but expectant,
a mouth that is not a door

but a chant, and in the distance
a radio broadcasts
what’s red-blooded and American—

no secret society, no wind,
no whole or scene or parts,
just what’s left after premature E,

teenage illumination,
not the E in evacuate or in escape,
the carnage an unnamable E—

for now it’s all straps
and buckles and snaps,
what’s bluesy and small-town true.

Over our shoulders the Tilt-A-Whirl,
quiet now, the Zipper stuck in midair,
Lucky Cups, the Shooting Gallery,

Skee-Ball and Clown Splash,
a row of open mouths in mid-vowel,
all evacuated, and of course

the Flying Elephants
that go nowhere really,
the whole world standing by,

Poem Ending with Six Words
from a Women’s Room Stall

Out there a litany—
angry gods, indigestible,
on an endless loop,
the insistence of each story
a bone held to a chest,
barbed wire against a cheek,
the should-have-been
backspun and pervasive,
absorbed briefly
by the seasonal drink:
lemon zest and grains
of paradise, rare pepper
and thirteenth-century spice
poured into talk aligned
like portable bruises, barstools
a seating chart,
numbered but not exact.

In here a lament—
the sobering light,
industrial hand soap,
towel on an endless loop
to say clearly what’s up:
we are not the first
but only the latest,
the science of obscurity
a needle
with techno piped in,
happily siloed among fields
where salt rushes to find
its way back to ocean,
an underwater dance,
angular in nature, not glass.

It would be faster
to stroke the blade
of a hacksaw.
It would be more pleasant
to drive to the river’s edge.
It would be easier
to dig for gods
in the backyard
where shells once grew feathers
among limestone and ash.

But we have swallowed our tongues
de rigueur, as is the custom,
and here, in the garment district,
it’s a never-ending mirror,
a box where I may linger,
joyfully muddled,
halfway between
illusioned and lost. 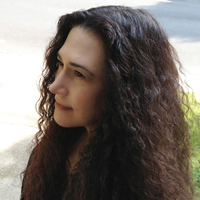 Teresa Leo is the author of two books of poetry, Bloom in Reverse (University of Pittsburgh Press, 2014) and The Halo Rule (Elixir Press, 2008), winner of the Elixir Press Editors’ Prize. Her work has appeared in The American Poetry Review, Poetry, Ploughshares, Women’s Review of Books, New Orleans Review, Barrow Street, The Florida Review, Painted Bride Quarterly, and elsewhere. She has received fellowships from the Pew Fellowships in the Arts, the Leeway Foundation, and the Pennsylvania Council on the Arts, as well as the Richard Peterson Poetry Prize from Crab Orchard Review. She works at the University of Pennsylvania.