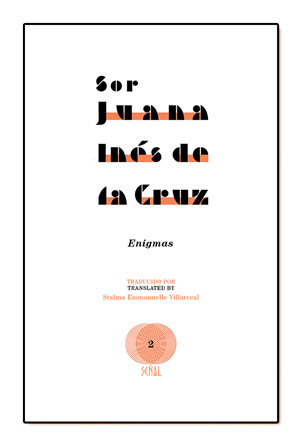 Sor Juana Inés de la Cruz remains Mexico’s greatest mystery. Born in 1651 out of wedlock and between social classes, intensely devoted to knowledge—having had discussions with Isaac Newton—and to Catholicism, she died forty-four years later despised by the male authorities of the church, but canonized as part of the literary godhead of the Spanish Golden Age. The haziness of these seeming contradictions evoked in the glorious 20th century Mexican poet, Octavio Paz, a sensation of the enigmatic which he captured in “Wind, Water, Stone”: “Each is another and no other.” It’s appropriate, then, to see Enigmas publication; it is a work whose title is a reflection on both de la Cruz’s existence and poetry, and also on the amorphous gulf between language and meaning that translators of poetry attempt to concretize.

At least that’s what Stalina Emmanuelle Villarreal seems to get at in her manifesto-ish “Translator’s Not-(Subtractive Letter).” Much as she describes her aesthetic decisions, “through Neo-Baroque deletion of first person yet a postmodern acceptance of my identity,” the note evokes the characteristically astringent intellect of poststructural feminism. Also in Villarreal’s note, she insists her “polar associations to sound and form” embodies Gloria Anzaldúa.” I could go deeper down the spiral, citing Villarreal’s interest in “all of Sor Juana’s enigma translations…hyperlinked to each other” and her obligation “to pick a unifying aesthetic that would point to naked sound.” All I’ll say, however, is that Engimas is szygy: the rare coincidence of planetary alignment.

We, in the western tradition, would call Villarreal’s Sor Juana Emily Dickinson. You get this feeling as you flip through its twenty bifurcated pages—Spanish above, translation below—filled with obscurities (“What will be the idol vow… / that makes prayer shame / the vulgar wow?”), off-putting slants (“What is that despair…Its offspring the fire”), and dizzying religiosity (“what is that deity / that with such blind ambition… / utterly becomes liberty?”). Perhaps knowing Dickinson’s popularity among second-wave feminists, you consider how Adrienne Rich described Dickinson as “[choosing] her seclusion…to practice necessary economy.” And while the Mexican poetess would seclude herself to this end (the habit little more than a necessary social veil), the Amherst poetess would be forced by her mother’s illness to make her home a hermitage. In short, both wrote poetry whose central gesture is what Villarreal says “point[s] to naked sound.”

The translations themselves leave much to the imagination though, and not in the way the Villarreal would have it, thinking of “the ear [as] the lusty cusp at the hem of the clothing where the imagination is sexier than what is actually exposed.” Her work makes you wonder what “naked sound” is. Does it differ from being clothed “as syllable from sound?” The first enigma’s first line, “cual es aquella homicida” (translatable to “what is that murder”) is translated, stiltedly, as “what is that slayer-strife.” Is being awkward and self-conscious “naked?” Well, yes. Especially if you describe your “irregular vision” as “post-process as a new product with an antecedent.” Despite being brilliant theorists and writers, the poststructuralists that Villarreal cribs her style from were far from poetic themselves. 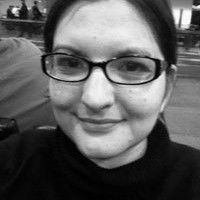 Nonetheless, the mystery is ruined when the structure of the mystery itself is called into question. Having “slayer-strife” in order to maintain Sor Juana’s ABBA rhyme—“and dies upon granting life” being the final line—seems antithetical to any attempt to have “sound and syntax become the materials to build the foundation.” Then the translator’s decision becomes the mystery, and not translation. Yet, Villarreal continues, “Sor Juana does not force the reader to decide…but rather facilitates the coexistence of yes and no.” And this is why, when discussing translation, the aforementioned amorphous gulf makes every effort to cross it invalid. The very title of the book, Enigmas, invokes an experience, unknowing. There are no answers to Sor Juana’s questions, just as there aren’t satisfactory explanations to Emily Dickinson’s. Life is not a question. How do you content yourself with a mind that, restless, wanders from certain comparison to “and they will differ, if they do?” What answer is there to:

What is that audacity
with such great presumption
that possibly being reason
fakes being idiocy?

The word enigma traces back to the Greek Ainos. An enigma is, in part, a proverb and fable. It is a story implied by mystery. Vice versa, an answer to the mystery is a story in itself. Ainos has another meaning. From the Greek of the bible, it becomes praise. For what greater mystery than faith; the Catholic faith of a downtrodden poetess who pursues her education, and the faith in humanity seen in the poetess watching loved ones die around them? What greater praise than finding meaning in emptiness, “with such great presumption / that possibly being reason / fakes being idiocy?” Villarreal’s translations does not intend to capture the Gnostic phrasing that is expected of the religious, but instead replaces it with the flabbergasting choices of “gutsy,” “spunk,” “spook,” and “whiz,” among others. But her translations do capture her “postmodern acceptance of my identity” and, therefore, the essence of Enigmas. They are inventions of faith.