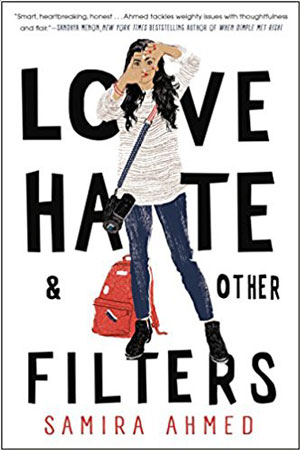 Maya Aziz sees her world through a camera lens. “One thing I’ve learned,” she says, “People love a camera, and when I’m filming, they see it, not me, so whenever I need to, I can disappear behind my trusty shield.” She is often the observer, experiencing her life on the outside looking in. As the novel opens, Maya is at a crossroads: she has been accepted to NYU’s prestigious filmmaking program, but her traditional Indian Muslim parents want her to go to school in Chicago, within reach of their influence and protection. To them, filmmaking is a hobby; for Maya, it is how she makes sense of a world where she is still unsure of where to place herself. To add complications to her decision, she begins flirtations with two different boys: the one her parents set her up with, Kareem, and Phil, a white American boy she grew up with in their small Illinois town.

As her flirtation with Kareem progresses and she grows closer with Phil, Maya is forced to reckon with the good-girl, parent-pleasing persona she has cultivated her entire life. Maya’s aunt, Hina, is the rebel in the family. She remains unmarried and works as a graphic designer in Chicago. She is Maya’s constant supporter, and their closeness displays Maya’s complex relationship to her culture: the battle to please and pacify her parents, especially her fearful mother, her lapsed relationship to being a Muslim woman, and her need to express who she is.

Maya’s narrative voice is funny, biting, insecure, romantic and pragmatic, containing all of the complexities readers could want in a young woman her age. She constantly references film history, older Bollywood musicals and contemporary literature as ways to understand her first kiss, her interludes with Phil as they sneak away to a secret pond to be alone, and her own familial ties to a culture that confounds her and is still a part of her.

While Maya’s NYU dreams and her burgeoning romantic feelings about Phil grow uninterrupted, a sinister undertone haunts the novel’s progression. Between each chapter there are short cinematic interludes, scenes that hint at a violence to come, like a car speeding towards Maya’s life in a rearview mirror she is unable to see.

When a terror attack occurs in neighboring Springfield, Maya’s small community is rocked by the loss of life and she must contend with being the only Muslim, Indian-American girl in her town as she never has before. Much of the events in the novel reflect our charged Islamophobic climate as our nation waits for a decision from the Supreme Court about whether or not they will uphold the third iteration of the “Muslim Ban” that has weighed on immigrants and families in the first year of the Trump presidency. Islamophobic rhetoric is on the rise since 9/11, and this book holds a story within it that is more necessary now than ever. 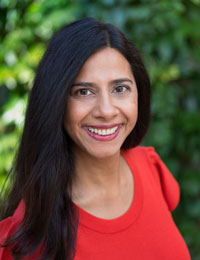 The political is inextricable from the personal, and Ahmed authentically reflects Maya’s struggles and joys. Her relationship to her country, her religion and her culture shifts and changes as the story progresses. When her family’s façade of peace and obedience is challenged, so is Maya’s conception of her parents as one-dimensional, traditional Indian parents. Her understanding of their fear for her safety and her future morphs, as she begins to see how easy, and perhaps necessary, it has been, for Maya to dismiss their fears about what people will say and do to her when they are under direct threats of Islamophobic violence. Ahmed shows compassion for the victims of terror attacks while also shedding light on the ways that the word “terrorist” has been racialized, and how our conceptions of that word is changing.

In the Author’s Note at the end of the book, Ahmed writes: “And for those that bear the brunt of hate because of the color of their skin, or the sound of their name, or the scarf on their head, or the person they love; for those who are spat upon, for those who are told to “go home” when they are home: you are known. You are loved. You are enough. Let your light shine. I wrote this book for you.”

Maya’s personal struggles to find happiness and strength reflect the need for many of us, in times of change and uncertainty, to be able to see who we are: not as separate from our families and cultures, but shaped by them, and hopefully, uplifted by them, in a world, and future, of our own making.