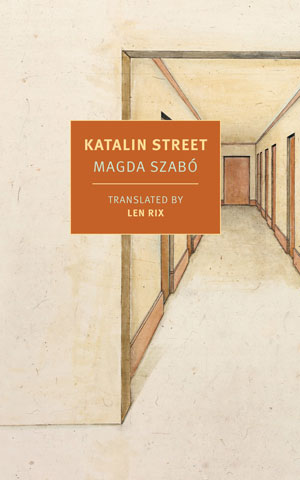 Four children play together in a quiet neighborhood. The children are Henriette Held, the young daughter of a Jewish dentist; the Elekes sisters, Irén and Blanka; and Bálint Temes, the handsome son of the Major. Their game is Cherry Tree, in which they all sing and spin in circles, and one of the children “chooses” another, the one they love. In this innocent game, the girls invariably choose Bálint, and each girl develops her own particular feelings for the boy; when it is his turn to choose, though, Bálint always prefers Irén, the oldest and most serious of the three. This is one of the earliest memories shared by the Elekes, Temes, and Held families, who form a lifelong, tragic bond in Magda Szabó’s Katalin Street.

The bond between these families is cemented when, later in life, Bálint and Irén are married. Their eventual marriage seems a given from childhood, but is stalled by other relationships, the tumult of life in postwar Hungary, and the death of their friend Henriette. During the German occupation, the Elekes and Temes families attempt to hide Henriette, who is Jewish, but through a series of miscalculations she is discovered and killed by a German soldier. Henriette’s ghost literally haunts the novel, wandering helplessly through time and observing her friends. More troubling for the living is the memory of Henriette, which is bound to the memories of their younger, happier selves.

I first encountered Magda Szabó when NYRB Classics published Len Rix’s prizewinning translation of The Door, named one of the 10 Best Books of 2015 by the New York Times Book Review. This Hungarian novel, originally published in 1987, had suddenly become one of the most celebrated books of the year. When I read The Door I knew nothing about Szabó or her work. I knew only that this book was, according to Ali Smith, a “compelling, funny, and horrifying novel.” Reviews online praised The Door unanimously, and it was on the “Staff Picks” shelf at my favorite local bookstore.

Magda Szabó was born in Hungary in the early twentieth century. She was a teacher, poet, novelist, playwright, and children’s author. A succinct yet thorough biography, found in each of her books, tells the story of a career complicated by war and politics. Szabó’s early success as a poet—she won the Baumgartner prize for her 1947 collection Return to Man—became a political liability under Hungary’s Communist rule, so she turned to writing stories and novels.

Following the success of The Door, in 2016 NYRB Classics released Iza’s Ballad, translated by George Szirtes. Iza’s Ballad, like The Door before it, is a story about younger Hungarians’ attitudes toward the older generation. In The Door, a young writer clashes with the proud older woman she hires as housekeeper; Iza’s Ballad centers on the tense relationship between a grown daughter and her aged mother. In his introduction, Szirtes asks, “What to do with the old? What to do with parents or grandparents who can’t cope with modern life but cling to lost ways of acting and feeling?” This seems to be a major concern in Szabó’s work: How can we make progress without abandoning the older generation? Her characters often fail, acting cruelly toward those who represent dated ways of thinking.

Where the younger characters in The Door and Iza’s Ballad readily abandon old beliefs in the name of progress, Katalin Street’s characters face loss and longing. They yearn to return to their idyllic childhood, full of gossip and games, while facing the tumult of adult life in postwar, Communist-controlled Budapest. And the main symbol of that childhood is the titular Katalin Street, best described by Henriette Held when she sees it for the first time at six years old:

The houses—tall, narrow edifices standing at the foot of Castle Hill—were very different from the ones she was used to. Of the Castle itself she knew nothing. It was a source of awe and wonder, like an illustration from her book of fairy tales. At the far end of the street was a strange little construction whose nature and purpose she could not begin to imagine. Where she had lived before she had never seen a European-style well, let alone a Turkish one. It must have been early summer, because there were blossoms on the lime trees and she had noticed the scent.

The smell of lime trees, the image of a castle on a hill: these are the lovely memories Irén and Blanka and Bálint recall. They also remember the games, filled with love and freedom, that they played in each home’s garden. Yet all of these memories are distant, marred by the death of Henriette. There can be no consolation in returning to Katalin Street for a visit. All of the beauty of the old neighborhood is gone. The characters now live in an apartment on the opposite side of the river: “the place that sheltered them from the rain and the heat of the sun, nothing more: a cave, if slightly more comfortable than a cave.” They detest the new apartment for not being their old home and despise it further because, from the window, they can see across the river to Katalin Street, where their childhood home is covered in scaffolding. The house, in its current state, is “like a childhood friend who, either in anger or a spirit of fun, had put on a mask and forgotten to take it off long after the party had ended.”

All of this is captured in precise and vivid language by Len Rix, recipient of the 2018 PEN Translation Prize. In awarding this prize, the judges cited Rix’s artistic subtlety, “the mastery to allow Szabó herself to stand out as an exemplary writer.”

All of this is captured in precise and vivid language by Len Rix, recipient of the 2018 PEN Translation Prize. In awarding this prize, the judges cited Rix’s artistic subtlety, “the mastery to allow Szabó herself to stand out as an exemplary writer.” Szabó’s approach in Katalin Street feels markedly different than in The Door or Iza’s Ballad, novels that moved through time more or less chronologically, following a smaller cast of characters. Here, Szabó’s scope is larger. Readers follow her characters back and forth through time, experiencing the impressions and injuries that the years have made on each character.

If Iza’s Ballad asks, “What to do with the old,” Katalin Street wonders “how to carry on living when we are haunted by the memory of everything we have lost.” For Irén and Bálint, carrying on means learning to love one another anew; they are, after all, not the children they were when they first fell in love. For Henriette, it is a matter of watching the lives of the ones she loves, knowing there is nothing she can do to reach them. And for Blanka—who has always loved Bálint and knows she will never have him—the only option is to flee. Blanka moves to a distant island, where she marries a man who does not ask much of her past.

As dark and troubling as Szabó’s novels often are, they are not without glimpses of hope and good intent. In the opening pages of The Door, the narrator admits: “I killed Emerence. The fact that I was trying to save her rather than destroy her changes nothing.” But, of course, this fact changes everything. The desire to save someone from oblivion—no matter the result—comes from a place of compassion. Likewise, though Iza is unkind to her mother until the old woman’s death, the love she’s always felt for her mother surfaces in the novel’s final moments.

Hidden in the tragedies of Katalin Street is a different kind of hope, one built not on returning to a glorified past, but on manifesting remembered joys in the present moment.

By leaving Katalin Street and abandoning her family, Blanka seems to have dispelled all hope of reconnection. She flees because proximity to the places and persons she loves is too painful. Yet the departure and the ensuing distance produces a counter-reaction. Blanka begins to cook as Mrs. Temes taught her. She sews cushions just like the ones her own mother sewed for her as a girl. Many of the books lining the shelves of her husband’s study are translations of the same books Mr. Held once owned. By staving off memories of Katalin Street Blanka begins to embrace all of the beauty the others, still living in Budapest, believe is forever lost. When Henriette’s ghost visits to watch Blanka play the instruments native to her new island home, the music she hears makes Henriette recall “her own mother’s presence far more strongly than anywhere else.” Hidden in the tragedies of Katalin Street is a different kind of hope, one built not on returning to a glorified past, but on manifesting remembered joys in the present moment.