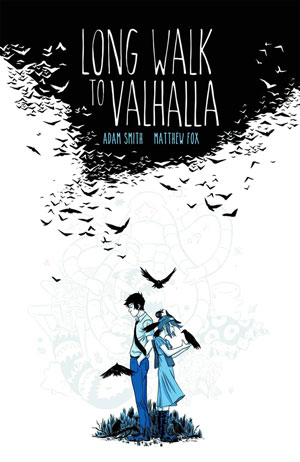 In Long Walk to Valhalla, a graphic novel by Adam Smith and Matthew Fox, we follow a young man named Rory as he winds his way back through memories of his childhood in rural Arkansas. Rory and Joe are brothers, but so much more. Rory is Joe’s protector. Joe has difficulty speaking and is prone to strange trances in which he sees visions of “Pretty Things,” surreal-looking creatures that are not exactly monsters but certainly not part of the normal landscape of Arkansas. Because of Joe’s peculiar malady, he is vulnerable to worlds both real and (perhaps) imagined. This is a story of growing up and the sadness that accumulates along the way.

The story begins when Rory’s car breaks down in the middle of nowhere. He has only three contacts, all three of whom we meet during the course of the narrative, and no money to make a call. Then Sylvia appears from within a corn field near where Joe is stranded. She claims to be a Valkyrie out of Norse mythology, sent to take Rory off to Valhalla, the land where heroes go after they die in battle. 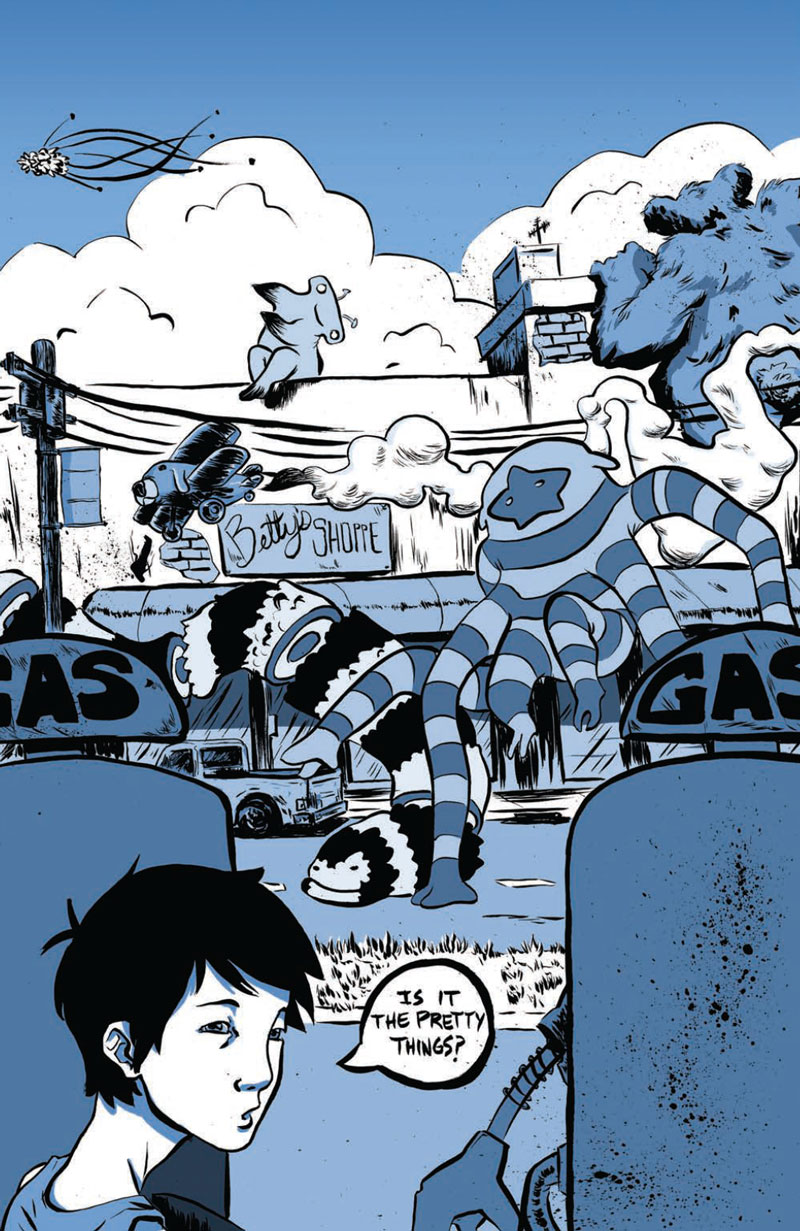 This is a framed story that works on several levels as it moves back and forth between Rory’s present and his childhood. There is the story Rory tells himself and the story he tells Sylvia about his life. Rory and Joe’s abusive and alcoholic dad, Dwayne, looms large in the frame, the one constant that must be overcome. We get a sense of Dwayne’s character in one of the early flashback scenes, when he sends Rory and Joe out to a convenience store to buy some ephedrine so he can cook meth. 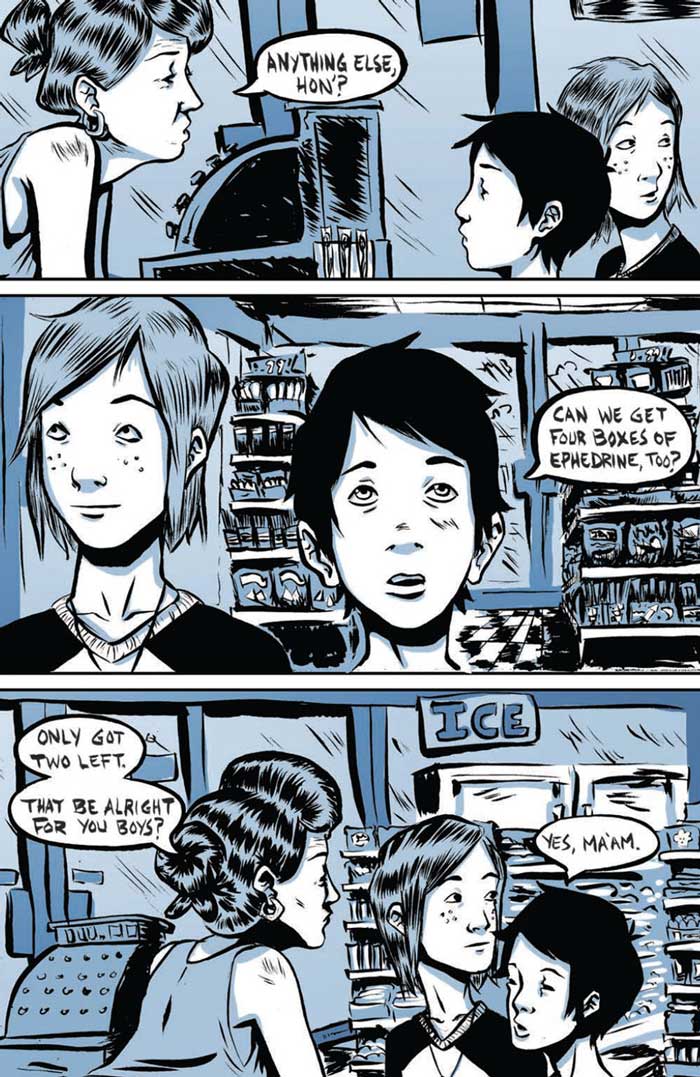 When the boys return, he spends hours haranguing Joe over some perceived slight. This short scene also defines the setting of the small rural town where Rory and Joe grow up; the store clerk is not at all surprised that Dwayne is sending his sons to do his “errands,” and when she comments that Joe “don’t talk much,” Rory simply says “Yes, ma’am,” and takes Joe’s hand as they leave, showing the protectiveness he feels for his brother. We then see the parking lot from Joe’s point of view: alive with hordes of bizarre creatures, from a dog-faced airplane to a giant sushi monster. Rory doesn’t share these visions, but he accepts that Joe sees them and doesn’t label him as crazy because of it. 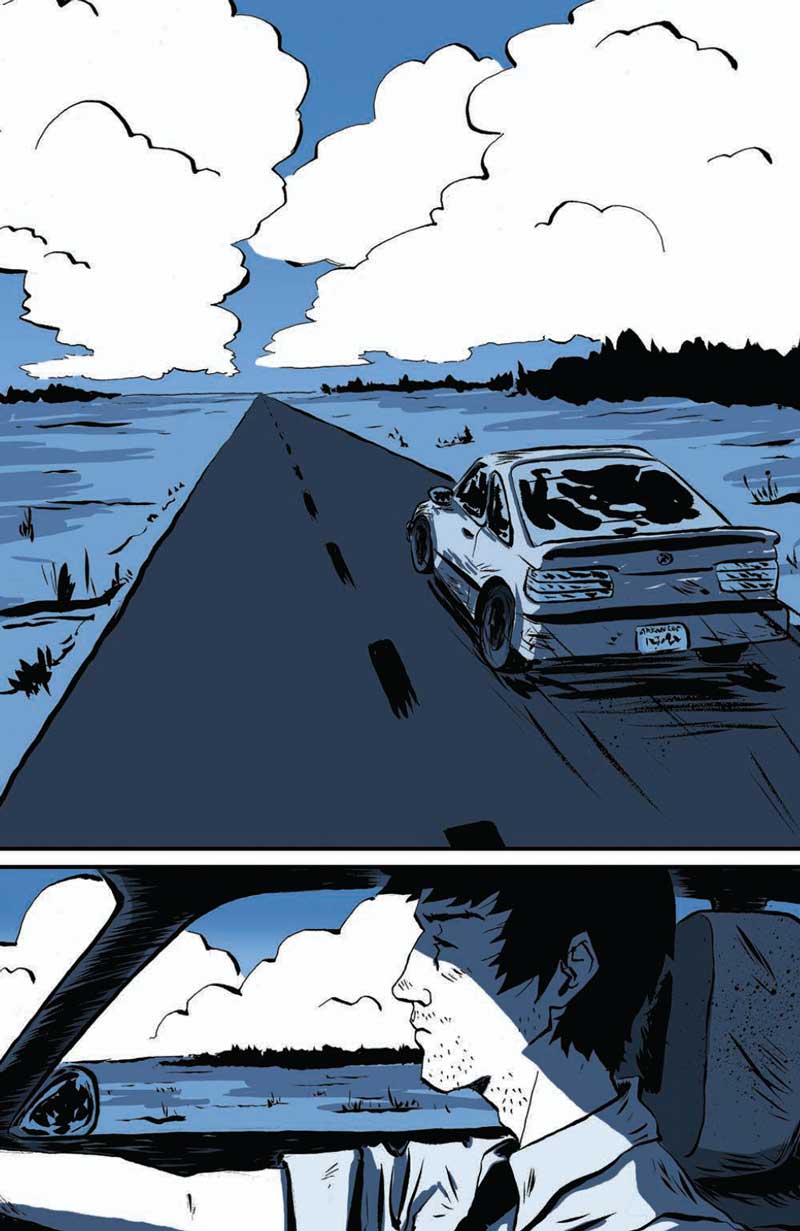 Long Walk to Valhalla is a switchback through the worlds of visions and reality, through past and present. it wanders through memory, through nature (corn fields, water, forests) and through the human-built world (farm buildings, roads, cemeteries). The journey is rendered in a muted, dark palette of blue, black, and white, similar to the color scheme of Craig Thompson’s coming-of-age classic Blankets. Melancholy permeates the narrative and it comes out most distinctly in the art, punctuated by the narrative happenings.

The “pretty things” are where Fox’s art really shines. It is their inclusion that gives more breadth to the story being told. The artwork portrays these beings as vividly as a young boy’s visions, stretching them into the absurd as well as the terrifying. Perhaps Joe’s monsters are metaphorical, perhaps not. The true monster, for Rory at least, is his father, Dwayne. Dwayne reappears toward the end of the narrative, shoes first, looming menacingly, just as he did when Rory was a child.

Only now, Rory has grown up. He no longer has to be intimidated by his father’s threats of violence, nor does he have to respond in kind. He can choose to walk away–a different kind of victory. 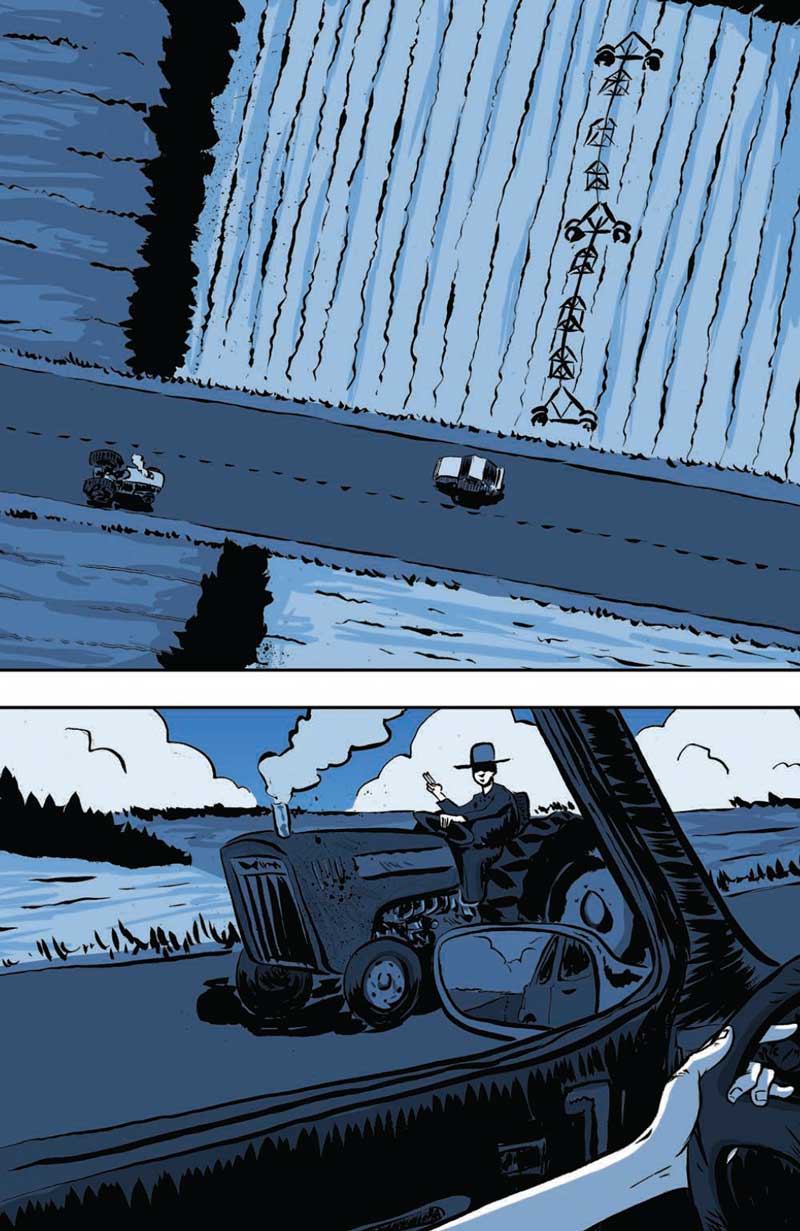 This is a small story, the antithesis of most superhero comics, yet one whose emotional impact ripples out from small gestures and memories. The author took the title from a Kurt Vonnegut short story, “A Long Walk to Forever,” and told an interviewer he admired the way Vonnegut was able to convey so much in a single scene of two characters talking. It’s a tale in which the real and surreal exist side by side, filled with a quiet nostalgia, yet also charged with the tension that comes from Sylvia’s pronouncement that she has come to escort Rory to Valhalla. This melancholy, memorable graphic novel is the story of a childhood remembered and the echoes of childhood in the lives of men who have grown and changed: a story well worth reading.

Brazos Price is from Austin, Texas where he served as an inaugural member of the Texas Library Association’s Maverick Graphic Novel Reading List. He has also reviewed comics for the librarian-focused website No Flying, No Tights. He now works as a librarian in Atlanta, Georgia.