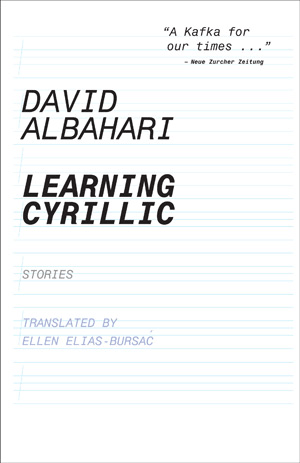 Printed on the cover of renowned Serbian author David Albahari’s most recent short fiction collection, Learning Cyrillic (his seventh book to be translated into English), is an excerpt from a review, “A Kafka for our times…” As I read the twenty plus stories in the collection, this short passage stuck with me. I was taken aback and distracted by how little resemblance to Kafka I found. Unlike Kafka, who never breaks role and keeps the fourth wall strong, Albahari entertains a great allowance of postmodern play—with frequent narrative breaks and ruminations on meaning and text. With the exception of, “The Basilica in Lyon,” about two-thirds into the collection, there is slight trace of Kafka. And even in this piece, the resemblance is superficial and lies solely in the use of a labyrinth setting.

Albahari and Kafka, while an interesting comparison to note—given the author’s geographic proximities and proclivity for parable—seem to hold little in common, apart from a partiality towards general weirdness. Unlike Kafka’s bleak meanderings of an isolated protagonist, trapped inside an indecipherable system—Albahari’s stories often feature two or more people conversing. The conversations take place in typical circumstances—eating dinner, drinking coffee, etc. Albahari’s characters attempt to wade through the chaos of time and meaning together. Even if the hopelessness of Kafka is at times present, the overwhelming loneliness is not.

The majority of Alabhari’s stories concern language/interpretation, time, and love. These topics are roughly partitioned into the confines of a three-part structure, although the themes and tones freely bleed between the artificial and at times arbitrary boundary.

The stories of Part I explore the comfort of meaning and our human need for narratives in understanding the world. Alabhari does not confront these topics head on as much as he orbits around them, inviting a dance. He makes the reader work. In his more successful pieces the reader is left with a certainty that “I am missing something,” and it is fun to go back and interpret. In his less successful pieces, the reader is left with an abrupt ending and frustration. 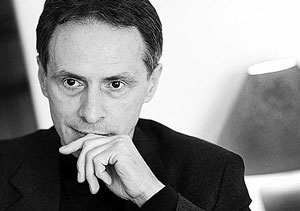 But when Albahari succeeds, he does so in great fashion. The first three stories in the collection are meticulous and intriguing. Each of them explores how people interpret contexts differently and how communication is rooted in the shared interpretations of contexts. If you are sensing a little bit of later day Wittgenstein here, it’s no accident. Albahari constantly returns to Wittgenstein themes: Is there a Truth or only a variety of interpretative narratives? Can we ever be sure that another person is interpreting as we are? Is meaning ever truly shared? He wrestles with solipsistic fears, as Wittgenstein’s interlocutor in Philosophical Investigations. Here, a man and wife in conversation in Albahari’s “Lolita, Lolita” talk across the divide:

I remembered a sentence from a friend’s letter. “Interpretations of dreams,” I said, “are boring. They only matter as images.” “Nonsense,” said my wife. “Images are empty space that has been painted in: interpretations are the connective tissue, the glue. Without them the images burst like soap bubbles. Dreams are lost my dear,” she said, scooping mayonnaise from the jar with her knife, “but interpretations remain.”

Albhari’s interest in these themes is not strictly philosophical. He aims to emote as well. It is clear he finds a great sadness in the secular world’s preference for structural narratives. In “Fireflies” he gives us a young girl, Eva, who spends youthful summer nights in reverie, contemplating fireflies’ glow. Later in life she receives the scientific narrative—the biological explanation of the fact. After this happens, not much changes. The sky does not fall and buildings do not crumble. But the world of our character has changed. There is less magic in her life.

After the first three pieces, Albahari transitions to a more classic narrative style. In “Shadows,” he writes about an author who has a devastating encounter with the son of an ex-lover, as he passes through town on a book tour. Throughout the entire collection we see Albahari move back and forth in this way—from dialogue driven philosophical musings in the vein of Delillo to Chekovian slice-of-life tales that at times incorporate genre techniques, such as suspense and twist endings.

In Part II, Albahari shifts away from his meditations on interpretation and explores the nature of time, with emphasis on how different cultures can embody different times, and what happens when two different time-embodying cultures interact. In the eponymous story, “Learning Cyrillic,” our protagonist is a Serbian immigrant who lives in Canada (as Albahari himself does). He teaches Cyrillic to Canadian children at a catholic church, where he keeps bumping into and eventually builds a relationship with a Native American of the ‘Blackfeet’ tribe. Throughout the story, the Serbian, the priest, and the Native American, bounce off each other, each confused and intrigued by the other’s foreign beliefs and historical narratives.

The theme of time is continued in “Stamps,” a tale about a stamp collecting father’s wish for his tech-savvy son to continue the hobby and his dismay when his son does not. The father can’t keep up with the times: “…the world had changed and that he hadn’t caught on soon enough, or that somewhere in himself, even if he had noticed the change, he had done nothing to embrace it.”

We also encounter mediations on time in “Hitler in Chicago,” “The Basilica in Lyon,” “Tito in Zurich,” and others.

Albahari transitions again in the third set of stories, this time into the realm of love. At the same time he moves away from the classic narrative form and intensifies his postmodern approach. With constant breaks from the physicality of setting, Albahari migrates into analysis of language and solipsistic neuroses, which he often explores through two people’s shared anxiety. In “A Story With No Way Out,” a man has included himself and his wife in a story he’s written. “You mean to say you don’t know how to get us out of this story?” says the wife,

This is despairing and smart and funny, but at the end of the day the stories that stuck most were narrative driven. The shorter more philosophical stories lacked the characterization necessary to generate empathy. These were fun puzzles to dissect, but after a few of them the effort became tiring and the abrupt endings unsatisfying. While, at first, the short length of these stories—two-to-three pages—was compelling, the form eventually grew tiresome; it had the effect of disrupting this reader’s pace. The short length also hindered any lasting connection or investment in the characters.

It would be unfair not to note that for me, postmodern fiction, relying too heavily on cleverness and tricks, frequently lacks the emotional resonance that the narrative form can deliver. With that said, and recognizing the irony, I admit that my favorite pieces of this collection (the first three) are some of the most quintessentially postmodern of the bunch. Regardless of all criticism, Albahari’s successful stories and ambition alone, make for worthwhile reading.