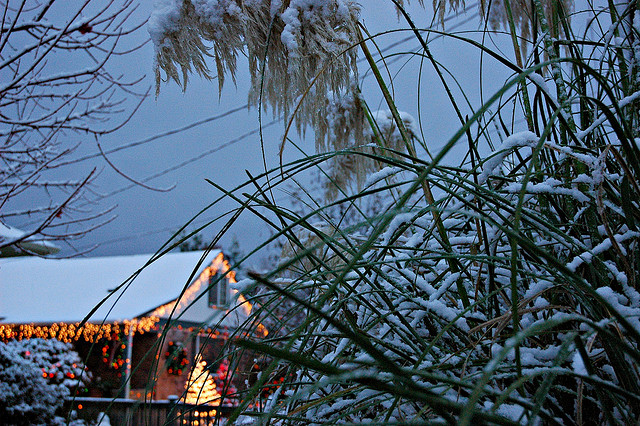 LAVERNE AND SHIRLEY
by Ivy Hughes

I held the handset of the house phone to my ear, the dull tone providing a soundtrack for what was sure to be the most humiliating conversation of my life.

From the sitting room, the three-foot oil painting of Shirley and Laverne hovered like consequence itself. Posed with pink and blue ring pillows in their mouths on the day of their wedding, the great white poodle and hyperactive Yorkie were the only children my ex-boyfriend’s mother and stepfather shared.

My ex and his family were spending Christmas in California, an event I hadn’t been invited to because my ex had fallen in love. With someone else. I’m sure if my ex’s mom knew I’d recently put myself in the category of mentally ill, she wouldn’t have asked me to watch her precious dogs. But there I was, day three, daily check-in number four of feeding and watering the defecating animals. As much as I despised their slobbering mouths and out-of-control affection, their routine kept my mind off other things.

Hours before, when I had pulled into the driveway of the lakeside McMansion, I parked the car and thought about my situation. As a member of the mentally ill, how was I supposed to act? I stared at the roof. That summer—when I was still the rational one—I’d talked my ex out of jumping from the eves after he’d eaten too many mushrooms. But temporary insanity from a peer-approved drug binge is not a mental illness. I was a label. A lonely one.

I was, thanks to the Tegretol, also a slob. I pinched my new love handles and walked to the door. The glass panels trembled in time with Shirley’s cartoonish poodle silhouette, which shadow boxed the door to the beat of Laverne’s piercing yelps. Was there a fire? A robbery? How were dogs I saw three hours before so out-of-control? Panicked, I turned the key and stepped inside.

Shirley’s mighty claws slammed me to the ground. I sniffed for smoke but got a nose of foul dog tongues instead. Their butts rattling like fishing boat engines, I fought their dopey-eyed affection. Without warning, Shirley jumped from me, knocked over a table, bounded up the stairs and leapt from the second floor landing. This was not love.

Belly jiggling, I jogged down the hallway. When I reached the kitchen, Laverne rolled over and laid next to the chewed remains of my pill bottle. Shirley, who was taller and more intelligent, must have smelled the sickly cherry scent of the pills, grabbed the bottle from the counter and convinced her less intelligent, sharper toothed companion to chew through the bottle.

With Shirley riding my back, I ran to the phone and dialed an emergency vet operator named Sue.

“And what are the patients’ names?” Sue asked.

“Patients? You mean the dogs?” Shirley snotted on my hand. I wiped it on an afghan.

“Does that matter? They’re out of their heads!”

“Of course it matters.”

“OK. Get a container of salt, lock Laverne and Shirley in a bathroom and throw it down their mouths. It will initiate the gag reflex.”

With Sue on the phone, crushed bottle in my hand, I lured the dogs into the upstairs bathroom. I slammed and locked the door. Laverne jumped from the toilet to the tub catching paws and head in the shower curtain. Shirley scratched my arms with long black toenails, which had been painted vixen red in the spirit of Christmas.

Untangling Laverne from the now ripped shower curtain, I mounted her like a mini pony, opened her trashcan of a mouth and dumped salt down her throat. When she gagged, I let go, mounted Shirley and did the same.

Shirley slammed me onto the toilet. Her tongue ravaged my face as if I’d given her a lifetime’s supply of bacon bits rather than a half-gallon drum of salt. I shoved Shirley to the floor. Behind her stood Laverne. A statue. Brown eyes begging freedom from a frozen body. The closer I got to Laverne, the more rapid the movement of those dilated moons.

“Sue!” I yelled into the handset. “The little one is as stiff as a corpse!”

Laverne’s pleading eyes reflected the streetlights of the empty streets. At stoplights, I released Laverne’s paw and patted her head as if affection could somehow fix the situation.

As I accelerated after a stoplight, a cloud billowed in the horizon of my rearview mirror and then disappeared as the car’s engine screamed. Shirley had chewed her way through her seatbelt and thrown the car in neutral.

“Goddamn it, Shirley!” I yelled. “Can’t you see Laverne is in trouble?”

I smacked Shirley’s jugular with my forearm and braced my arm on the side of the passenger’s seat creating a barrier between Shirley and the car’s control panel. For the rest of the drive, I moved my arm with Shirley’s face and paws as she desperately tried to sit shotgun.

Technicians greeted us at the emergency room door, pushing me out of the way as they loaded Laverne on the doggie stretcher. Shirley was leashed and placed in custody.

I was led to a room where, after staring at the clock for an hour, wondering how in Christ’s name I would explain this one, an officer delivered Sue and instructed me to tell my story. Sue listened, filling in cold hard facts when needed.

“Please read and sign this statement,” said the officer. “Laverne and Shirley’s parents will need it for insurance purposes.”

I reddened as I read the statement. The pets had better insurance than me.

“It says here that the pills in question are used to treat the mentally ill.”

The officer looked at Sue. “For bipolar disorder?”

I coughed. “I’m hardly bi-polar. Depressed, possibly but not whacko.” I drew a crazy circle around my ear. “You know how it is.”

A look of pity passed between the officer and Sue just as I imagined it would when I would call my ex’s family at 2 a.m. to explain Laverne was in critical condition because she’d eaten pills meant to help a crazy ex-girlfriend deal with life.

When I explained what happened to the family—the dogs ate pills, got sick—my ex-boyfriend’s sister abandoned the drama of her eating disorder to mourn dogs she hadn’t seen in three years. His mother sobbed. My ex created a silent wall between himself and my insanity.

“So they may not make it…through the night?” Asked his mother.

“Shirley is fine, but a little hyper. They have Laverne on an IV. Her stomach has been pumped.” I twisted my hands. They were dry. Cold.

“What kind of pills did they eat?” asked his step-father. “You said you were on some medication?”

I swallowed, wishing the dogs had devoured me rather than the salt. I pictured the normal family I was no longer a part of sitting around a phone console in the middle of some garish duvet, fingers twisting Kleenex, fists rubbing eyes, wondering what happened to the dogs they loved and the woman they thought their son would marry.

I back peddled. “Technically, the pills help with depressive mood conditions such as bipolar disorder….”

“You’re bipolar?” His step-father asked. The sniffles stopped. I pictured my ex-boyfriend excusing himself to the restroom, the pool, the bar.

“I’m sorry. I didn’t realize the dogs would smell those pills. I should have brought them home or put them in the microwave.” I winced. The microwave?

The next day, I met the stepfather and the mother at the hospital. The sister was too upset to see the dogs. My ex, presumably, was too distraught to see me.

My ex’s mother stroked the top of Laverne’s head as she lay in a cot recovering. His stepfather sat next to her, the 90-pound poodle in his lap. He rubbed Shirley’s ears, pressed his nose against hers and stuck out his tongue, which she licked. Ferociously.

After an awkward greeting, the stepfather untangled himself from Shirley and walked me into the hallway.

“I can’t say we’re not disappointed.” He said.

I didn’t know if he was talking about the ordeal or the diagnosis, so I said nothing.

He put his hand on my shoulder. His hand and his face, which was close to mine, smelled of dog. “But we wish you the best.”

He offered his hand and a complicated pity delivered by soft eyes. I took the hand and rubbed my clean skin against his, which was undoubtedly covered in butt juice and snot.

When he wasn’t looking, I wiped my hands on my pants. This is what it would be like. Someone would hand me the discomfort, the bile—the snot—my new label aroused. I would accept it and get rid of it when they weren’t looking in whatever way I saw fit. This was mental illness. 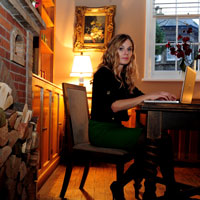 Ivy Hughes is a full time freelance writer. She writes for several newspapers, magazines, and literary journals including Success, Entrepreneur, the Boston Globe, Interval World, and Litro. She grew up in Colorado, but recently moved to London, England where she lives with her husband.