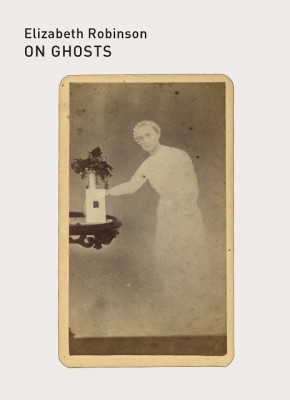 Elizabeth Robinson’s On Ghosts is, in her own words, “an essay” that seeks to understand the idea of haunting. As many teachers—perhaps just many of my teachers—like to say, to “essay” means to try, and what Robinson tries to do is to create a haunting so slowly and carefully that at first a reader does not notice. The structure of the text is simple: many small sections compound upon one another in an attempt to understand “the phenomenon of ghosts and haunting.” What seems at first to be an Explanatory Note quickly proves itself rather similar to many sections that follow; we readers are suddenly sucked in, like hikers who swear the day was clear until fog rose all around.

Though it’s hard to say whether this is Robinson’s fault or my own, the first few sections seem awkward, too wordy, at once overly precise and not clear enough. Robinson describes apparition as “Rough erasure, but not real agency, not ‘power’…It is palimpsest, implicit disclosure.” Perhaps these attempts at definition rely too much on words that are already weighted, already haunted by meaning. Perhaps this means her definition is more successful than it initially appears.

Wandering on through the text—as an aside, the book itself is a pleasure to hold and read, so small and neatly contained—the format of words on the page continuously changes, never letting us rest in one shape for very long. “The Soul” looks like what most would call real poetry, all left-justified and line-broken; “Definitely Documentary” is composed of several short sentence clusters, not even paragraphs. Through the reading a few recurring forms appear, like refrains in a song. Robinson gives us “Incidents” and “Photographs,” each numbered, each paired together in describing a haunting. The photographs are not actual pictures; instead they describe what is shown in the supposed picture. In this way Robinson makes us haunters, too, ghosting the pages with our own imagined images, forcing our perceptions onto a paper that, as Robinson says, “is a page, and words may irritate its surface, dog-ear and crease it, but they will never truly impact the surface, they will never escape their page.”

The success of these sections makes a few of Robinson’s choices seem less assured, less graceful. She regularly inserts quotes from other writers—Jack Spicer, Kazim Ali, Simone Weil—into  the text, and while all relate to ghosts, and all are quite nice quotes on their own, they served mostly to distract my reading, to yank me out of the haunted headspace. Robinson also plays with font once or twice, including a very long James Longley passage in typical typewriter font, so lengthy and uniform the eyes simply glaze right over it to the unfortunately long italicized verses beneath it, not much better. When Robinson returns to more regular forms the writing itself takes precedence, and that writing is a pleasure to read.

The back half of On Ghosts is where the full effect of Robinson’s neat séance can be seen. “The Nature of Association” is perhaps the best section of the whole book; it describes the more mundane sort of haunting we experience when simple actions or objects recall people we know. Are our recollections of those people ghosts? They are not whole memories, just the idea of a personality, conjured up perhaps by “the smell of Pear Soap” or “putting lotion on after a shower.”

Robinson ends with a section called “Story,” paired with a photograph. The story recounts a simple sort of spooky tale; the photograph is, we are asked to imagine, the cover of a book in which this story was found. But for all the sparseness—in language, in content—and simplicity, the ending does not satisfy. The text is like a shaggy-dog joke, all beginning and middle with many discursive asides along the way, leading to a hollow echo of a punchline, a vacancy. But “On Ghosts” proves its point more, perhaps, after the book is closed. Recalling a person in the way Robinson so nicely describes then recalls the text. What started as a simple pleasant ghost becomes a double haunting. Initial frustration with so pointless an ending turns gradually into awe: Robinson has turned the text into a ghost itself, something not quite whole that insists upon recognition.