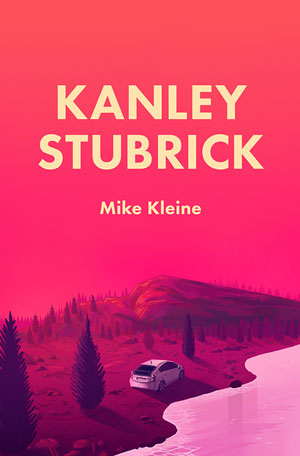 Kanley Stubrick
by Mike Kleine
We Heard You Like Books, 103 pages

When you check out the latest novel by Michael Kleine, Kanley Stubrick, on Goodreads, you’ll find that an anonymous reader asked the author if  “this book is going to house the Mystery of the 17 Pilot Fish play.” Kleine answered rather grandly, referring to this play set to be released at the end of August, and the rest of his oeuvre: “Kanley Stubrick and The Mystery of the Seventeen Pilot Fish are all part of the same universe, yes, but also, so is Mastodon Farm and Arafat Mountain. Everything–the characters, locales, events, situations, demises, dreams–everything is linked.” But Kleine doesn’t address by what means and to what end “everything is linked,” nor if this is a benefit to anyone involved. Kanley Stubrick doesn’t elaborate on it much. Rather, the experimental novel turns out to be a display of the picturesque absurdity of Samuel Beckett and David Lynch without the uncomfortable laughter; Klein borrows sitcom’s episodic format, lack of continuum, and commercial approachability for ends that forcefully lack those very same traits. Such is Kanley Stubrick’s impressive and precarious balance.

Mike Kleine was born in 1988, grew up in West Africa, earned a B.A. in French Literature from Grinnell College, in Iowa, and lives “somewhere in the midwest.” With how often he repeats this in his bios, with slight variation, it shouldn’t surprise you that he describes Philip Glass’ music, in his debut novel Mastodon Farm, as having a “half-way executed minimal aesthetic.” Just as Glass’ musical minimalism repeats refrains with little tonal variations and tremendous counterpoint, so too does Kleine’s writing seem slight and self-interacting. It’s the reflective texture in Kleine’s style that acts as a the remainder of the now-muted Alt Lit scene–scandalized, with the hubsite HTMLGiant dead–both as reflectivity that relayed the quotidian self to the reader and whose reflective powers force the eye to turn away with the slightest fleck of sun. 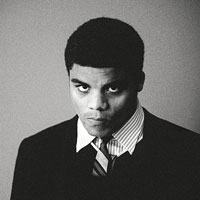 If you can see through this glare, you’ll notice how Kleine’s approach has changed throughout it all. Mastodon Farm focused on a wealthy, nameless character slightly rattled from his lifestyle by a car accident. Kleine took the yuppie ennui of American Psycho and gave it oversaturated pop culture and the affectless voice of Tao Lin (think Richard Yates), all while maintaining chapter divisions and something close to a singular narrative arc. But that was 2012, and that novel was rawer. It relied on degrees of tradition. His 2014 Arafat Mountain abandons linearity for a Many-Worlds Interpretation, where a mythical and unbelievable potpourri exists beside a cast of named nobodies. This is much closer to Kanley Stubrick in spirit: semi-plotless, entirely vagabond, and further experimenting with, as in Arafat’s case, the use of strikethroughs and several pages of black boxes that are presumably blocked-out text.

Kanley Stubrick begins with a nameless couple in “something like April (or June maybe)” watching a “program called World War II-era Aeroplanes,” except the aeroplanes have been dubbed over with motorcycle sounds. “A Cardinal red Saviola-Marchetti SM.81,” Kleine gives as a typically over-specific example that pushes away the scene’s familiarity with its oversaturated minutiae, “makes the sound of a Honda CB400N” (8). The nameless woman is  looking for her shoes. She insists they need to see new people. After several unsuccessful calls to friends and declined invitations, and after “two more programs,” he finds a note from her:

…i gave up
Trying to understand
And hung up. Hope
everything ‘s fine
tho. love You.
like a lot
Lot. (19)

I’m reminded of April Ludgate from Parks & Rec, but the love note is also a shout out to the novel’s epigraph, taken from Antonioni’s 1960 Italian classic, L’avventura, which shares the novel’s preoccupation with the ennui and detachment of the wealthy. The epigraph itself features two lovers, Claudia and Sandro:

The late film critic Roger Ebert’s praise for moments like this in Antonioni’s film could just as well be said of similar moments in Kanley Stubrick. “It is impossible to be happy simply because one is ceaselessly entertained. [It] becomes a place in our imagination–a melancholy moral desert.”

After going to Lahore, and then stopping by Casablanca “just because,” the unnamed male  returns to find his girlfriend missing. A package with a note is all that remains of her, informing him to go to Ojai. From then on, the story progresses in fits and sputters with these package-note combos that direct him to go from Petaluma to Skaggs Island, places that eventually bore him, driving him to travel in pursuit of nothing in particular. This boredom is twofold. At first melodramatic, as when ”He experiences 1,000 years of humanity,” or tries to kill himself. This is followed by a deboning, reducing those heights to the egocentric banal–”he doesn’t feel like he likes the feeling of feeling nothing.” Unlike American Psycho or L’avventura or even Mastodon Farm, Kanley Stubrick doesn’t invite you to feel particulars while reading it. Instead, it’s a brilliant sabotage of romance’s familiar emphasis on emotion and narrative continuity. It’s a “melancholy moral dessert” not in the sense that morality has dried up, but because, like watching a collared peccary eat a prickly pear, morality’s too abstract a label for such a seemingly impulsive series of events.

Against the backdrop of this cynical obliqueness, such a basic plot can seem abrasive. Of course Antonioni’s film comes to mind then since its “heroes,” Claudia and Sandro, become passionately entangled when their mutual friend (Sandro’s girlfriend) vanishes. A vanishing that, like with Kanley Stubrick’s protagonist, is treated with a central intensity that rapidly diminishes from focus. That she returns in the novel, while Sandro’s girlfriend is simply forgotten, could be a wink on par with Kleine’s formal experiments: strikethroughed text erase the utility of words, retaining their physical stuffing, while blacked-out pages turn absence into substance. Even the return of the love interest doesn’t guarantee that the presence of a thing means anything; the visceral experience of Kleine’s narrators is to doubt the functions of meaning to the point that Kanley Stubrick’s protagonist “thinks about what it means when He says, I love you” and then “imagines the words illusion and black and lovely.” Had Sandro’s girlfriend returned, likely they wouldn’t stay together. To what do we cling to in our embrace of one another? A mirage. If such a conclusion is not the dry heat of a “melancholy moral desert,” what is?

But the mirage is manifold. Consider: the spoonerism title, Kanley Stubrick, evokes the famous American director Stanley Kubrick. Consider: film is focused on, and necessitates considering, how we portray the world. Consider: Kubrick’s oeuvre focused on passion and perception–take Eyes Wide Shut with its masquerade orgies and broken marriage, or The Shining with its isolation-induced madness and psychological horror. There is more than a hint of irony in naming a novel filled with dispassion after an artist known for impassioned films; there’s a fainter irony in that Kubrick, unlike Kleine, directed “genre” films that rarely conceded movement to mood (with the possible exception of 2001). As much as Kleine is prone to plots picked clean of meaning though, the very readability of Kanley Stubrick appears more the impression of Kubrick than Antonioni. Kubrick and Antonioni are not, by far, the only directors mentioned in the novel. As one of the girlfriend’s friends says over the phone, “i think this is maybe very important–like a movie.” Because it seems that meaning can only be found by being seen and being in a scene.

Despite the depth of inspiration from the Italian L’avventura, I would argue that Kleine’s novel could only be said to exist in America today. And not just because of Kubrick. No country has the same glut of resources and equal distaste for (or moral discomfort in) distributing that excess to those without; few cultures indulge individualist thinking to such an extent that it breeds self-doubt and reactionary narcissism. It seems natural that an American such as  Kanley Stubrick’s protagonist, in a mix of longing and the need to engage others, would “only ever wanted to join a cult because of the group-like feeling of joining and being part of something like a cult.” When he comes home from the adventure and she’s back, they sit down to watch Kanley Stubrick (wink wink). “He’s asking her what she thinks of American culture.” “I don’t get it,” she says. “What do you mean–what is there to get?” They fight, they divorce, he cries. Happy reunion becomes bitter divorce, and moving on. And perhaps it’s in this spirit that Kanley Stubrick is an American novel, this despair of the wealthy over fleeting existential pain:

And perhaps it’s discomforting that this sounds like the breathless rhetoric of Donald Trump, so confident and assertive and conspicuous. That discomfort is maybe a good sign. The one way in which “everything is connected” for Mike Kleine’s protagonists seems to be through uncertain binding. Uncertainty about how things are, yes, but also uncertainty about how to extract meaning. What we’re left with are those who eat the scraps of meaning left over from excess; much like the pilot fish which swarm about sharks, devouring their scraps. (The publisher Plays Inverse will publish Kleine’s 17 Pilot Fish this summer.) This crumby mentality is “Antonionennui,” which sees beyond materiality, even if it does so only to feed off of it. It’s why, in the end, the still unnamed male protagonist “feels like, I don’t want to die anymore. But then thinks, also, that’s a good thing too, I think.” Is it good to be free of certain thoughts, is it good to “feel like” you’re free? And so we take one more step back, towards the ledge.