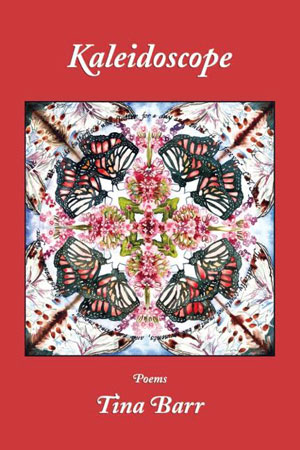 With the slightest rotation of its cylinder, a kaleidoscope provides altered views of the loose bits of glass that make up its interior. Tina Barr’s latest collection, the aptly titled Kaleidoscope, applies these slight rotations to the entire world, focusing on human experience—beauty marks, blemishes, and all. From the first line, “As I turn the chambered end,” the reader is sucked into a realm of time and tone-shifting fantasy that manages to stay grounded by direct, no-nonsense accounts of the author’s surroundings. Barr constantly changes directions, as the nominal theme suggests. She takes us to a jewelry shop on the corner of Al Muezz in Egypt, to the Golden Moon Casino in Mississippi, and to a nightclub where a jazz band, “hunts music that weaves itself through air.” This is just a small example of how far the reader mentally travels when reading Kaleidoscope.

Barr has an uncanny ability to balance beauty and despair with consistent precision. Although natural beauty gets the lion’s share of attention in her poems, all it takes for her to bring the reader back down to the cold, hard ground is a few lines, sometimes less. The poem “Shiny Brite,” shares a name with the company that dominated the Christmas ornament market in the years immediately following World War II. After the adorable visuals of tiny, blue-eyed Christmas elves with pipe-cleaner arms and cotton clog-feet in the first stanza, Barr rotates the cylinder in the second stanza and connects the peeling bark of a hydrangea tree with the atomic bombings of Nagasaki with the lines, “In my mother’s cold garden / the inner skin orange, bark peels from oak leaf / hydrangea, shedding itself. In a whoosh / like the flash of gas, their clothes evaporated / Dangling their hands, in Nagasaki people / sleepwalked home, faces peeling like loquat.” In “Dessert,” after the speaker sharply describes a scene involving an elegant dinner with family, complete with lamb chops and “strawberries nestled in yellow cream,” we learn of the grandmother’s fate in the last line: “My grandmother crossed Park, got hit by a car, and thrown.” It hits hard and straight as a punch.

Some of the most engaging moments in the book are found in the section of poems devoted to Henry Darger, a custodian who was orphaned as a child then spent his adult years living alone in an apartment in Chicago. Unbeknownst to his neighbors and fellow employees, Darger completed a fifteen-thousand page novel complete with hundreds of drawings and watercolor paintings serving as illustrations. It was only after his death that his life’s work was found. The first poem of the section, “Henry Darger comes to Lakebottom Park,” is filled with vibrant images of, “…scenes / you and I see in dreams.” These scenes come alive in the lines, “Gardenias send up / their sweet drifts; white skins untwist / brown in minutes. Magnolias open chalices / of cinnamon. A girl in a blue dress / carries a red basket; red binds her yellow ringlets.” The third stanza offsets the splendor of the aforementioned scene with the harsh reality that was Darger’s life: “At nine he boarded at Catholic school / at twelve touched himself in public / At seventeen, escaped the asylum, walked / his own skies to Chicago.”

In keeping with the style of strikingly descriptive writing, Barr forces the reader to acknowledge the darkness that so often lurks beneath the surface of human existence not by emphasizing it but by giving it only a few lines of attention that deliver a heavy blow to the reader’s emotions. One simply needs to retrace her creative steps to see that these dark plot twists have been a staple of her work for quite some time. 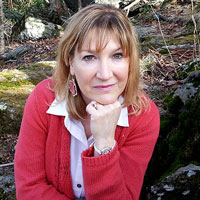 In 2002’s Red Land, Black Land, similar methods of highlighting small amounts of darkness to alter the largely-bright landscapes were used. In this collection, Barr, perhaps unconsciously, details the stark contrast between life as we know it in the western part of the world and life in Cairo, Egypt. She utilizes an outsider-looking-in approach to describe her sometimes grim environs. It does not seem that she is purposefully trying to embellish the bleakness of the city, with its ancient cemeteries, gorgon heads, and black stone walls, but that the omnipresence of such things are impossible to ignore even when focusing on a street scene or a moment on the bus. She cannot escape from the fact that the city of Cairo is a place of great religious importance and that this can clash with the lives of those who live or visit there.

In the poem “Alchemy,” Barr sets up a scene outside the Ibn Tulun mosque, where boys are flying kites, a possible representation of their desire to enjoy life without the pull of Islamic tradition—even though it is exactly that religious tradition that keeps them grounded. Birds “write in loops the name of Allah” which could mean that the concept of Allah is more in tune with freedom than it is with the fanaticism and rigid religious doctrine that is often ascribed to the Muslim faith. The light that glows from the kite-flying boys and the uninhibited birds dies out later in the poem when we are given an account of Barr on a subway under the watchful eyes of a cluster of conventionally robed and veiled Muslim women. She mentions that, “In some places south they still slice off / not only a girl’s clitoris but the labia / thorns tack what’s left together” in an off-hand and startling manner to help support the reasoning behind the black stone, walled-off facial expressions that some women in Cairo possess.

With all that being said, there are times when the exact opposite happens and a mostly-dark setting is infused with light in a single stanza. In “Cups of Terror,” we are taken inside Mohammad Ali’s mosque that sits high above the ancient Egyptian necropolis known as the City of the Dead which contains, “acres of Fatimids and Mamlukes.” Although the words that feed our imagination has us overlooking the deceased slaves of former kings, encircled by gorgons and dangling scorpions, we are saved by the sudden presence of birds that “rush and fill the archways of a shrine in each of us.” They represent life in a city of death through their movements and sound.

According to the author, the inspiration for Red Land, Black Land came from her time spent in Egypt (five visits from 1999 to 2003), where she always felt that the government was on the verge of collapse. During her last visit in 2003, men with rifles lined the roads that went to and from the airport and when America waged war in the middle east in response to the World Trade Center attacks on September 11th, 2001, she no longer felt welcome amongst the Muslim women in the streets who had always treated her with respect but now ignored her as she was an “infidel.” She wore oversized skirts and shirts and dyed her hair a reddish-brown to avoid drawing attention to herself. When she was alone she kept her head down to avoid eye contact with men. The dual themes of alienation and the country’s history of political upheaval run through each poem in Red Land, Black Land, driving them, albeit from the back seat, as the distinctive architecture and atmosphere of “The City of a Thousand Minarets” takes the wheel, constantly reminding the reader just how ancient and historically significant Cairo is.

It is necessary to look at Tina Barr’s prior work to see how far she has come as a writer. Her vision, or “Gathering Eye” if you will, is alive and well in all of her poetry, but never has the scope been as broad as it is in Kaleidoscope. She is an experienced artist and is no longer capable of staying focused on one place or moment in time. She is here and there and now and then and whatever is waiting for us around the corner.

Jeff Klebauskas is currently a student at Community College of Philadelphia where he is studying Psychology and Creative Writing. He also plays bass and sings in the melodic and chaotic sludge/punk band Ordinary Lives.