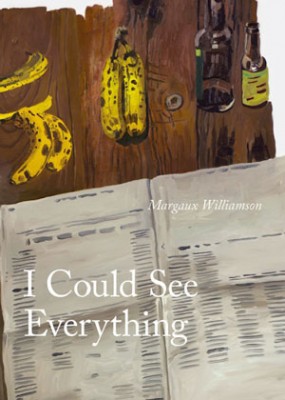 I COULD SEE EVERYTHING: THE PAINTINGS OF MARGAUX WILLIAMSON
by Margaux Williamson
Coach House Books, 164 pages

There’s something otherworldly about the actress Scarlett Johansson. Earlier this year she played an alien in Under The Skin and, in one of the most striking paintings in the artist Margaux Williamson’s new book, I Could See Everything, she plays the universe. The painting, called I thought I saw the whole universe, is a portrait of Johansson—or more precisely the infinite landscape represented by her wearing Versace for The New York Times. The dress is hypnotic, with what seems like a galaxy in the center. The dress becomes covered in shimmering stars and triangles. Something approaching the vastness of the universe can be seen emerging in Scarlett Johansson’s absented figure and the dress, from this magazine page. This is even further eclipsed in the later painting study: universe in which the figure is entirely taken away to show only this vast space. Looking through Williamson’s book, I found myself thinking of the Canadian landscape painters in the Group Of Seven. Like the Group of Seven and more contemporary artists like Peter Doig, Williamson brings us landscapes from the Canadian world: the stars beyond the dress of Johansson in the paper, a bar full of rainbows, the cave of her own hair as well as her living room and kitchen. I found myself wondering: would Tom Thompson be painting this now? 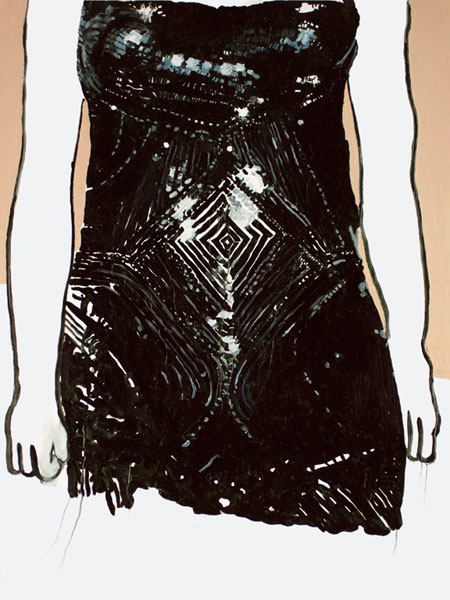 I thought I saw the whole universe (Scarlett Johansson in Versace)

Williamson places her artwork in an imagined gallery, The Road At The Top of The World Museum, not so insignificantly located in the Yukon, near the landscapes so famously painted by Thompson and other painters in the Group of Seven. As art critic Chris Kraus writes in a interesting short essay included in the book, the paintings of Williamson here “become iconic simply because they’re dreamt by the same person.” These various signifiers (landscape, celebrity, constellations) are here because they reside in Williamson’s imagination. Another one of my favorite of Williamson’s paintings here, Back, before, when me and Leonardo DiCaprio were homeless, places Williamson next to a brooding version of the young actor on a bohemian couch, amid a black background flickering white, again shifting into a constellation or out of a dream. There is no attempt from Williamson to bring DiCaprio or even her exhibit into palpable reality but rather into dreamt constellations. 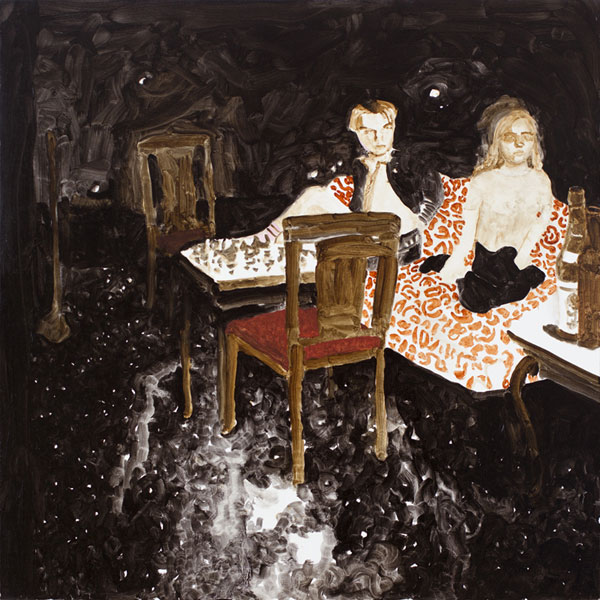 Back, before, when me and Leonardo DiCaprio were homeless

The role of the painter, perhaps even more than that of the curator now, may be to create constellations. Williamson’s images, through their inclusion in the created arrangement for this book, are given the chance to be encountered in relationship to each other, rather than floating online. There is recognition of the transience of our relationship to artworks now in Williamson’s choice to present these paintings in a book (as well as a brief exhibition at Mulherin + Pollard Gallery in New York). Our first encounter with artworks now can be said to come not in small galleries in the Lower East Side, but in the reproduction, the image abstracted from context. Many will have first encountered Williamson in a novel, Sheila Heiti’s wonderful How Should A Person Be, about a constellation of friends in Toronto. By choosing to place her exhibit in this imagined place at the top of the world, Williamson allows us to see this constellation of work—everything—in the way that recognizes the capability of art to be dreamt not just by the artist but also by the viewer. We visit this gallery and immerse ourselves in it as we do a location in a novel. We remember our visit to a place we have never been.

Gabriel Chazan, a filmmaker and writer, is from Toronto, Canada. He is currently studying film history, filmmaking and poetry at Sarah Lawrence College. He writes on film at Home Movies: The Sarah Lawrence Film Journal.