for the first thirteen days of August. I’m swimming

in lemons, squeezed within an inch of their lives, waterlogged, pressed to the bottom by
ice. My lips curl around the straw, suck down the pits

in waves of cool, the air conditioner dies its slow death: a whine, a rattle, a sputter. I let
it rest an hour then make it come again

in electric waves, burning my thighs with the laptop, stuffing newspapers underneath,
scrolling through emails as word after word drips humidity

in the chatter of children who have questions and answers and dissertations on cloud
formations. They lie on their backs and watch them run across the sky. They won’t pull
their hair into buns. They want it hanging down

rather than bound, the window boxes are watered and green but the flowers are
withered and frail. There are no new buds

in sand up to my ankles, jellyfish rule our corner of the sea, and there isn’t enough
vinegar at the snack shack to relieve the sting

in flutterless curtains. There is no breeze. All shades are drawn, but the fever sneaks in,
lives in the couch, the sheets, the pencil box. It’s sticking to the walls like spaghetti

during the tornado watch, heat lightning and flash floods – it’s all extreme. Gale force
winds won’t bend to the road

in the night of you. There is no other way to be but naked and splayed, trembling
through the sweaty little deaths, waiting for the big strike. 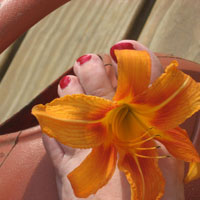 Marybeth Rua-Larsen lives on the south coast of Massachusetts, half-way between Boston and Cape Cod (but closest to Providence, RI), and teaches composition at Bristol Community College. Her poems, essays, flash fiction and reviews have appeared or are forthcoming inThe Raintown Review, Angle, Crannog, The Poetry Bus, Free Inquiry and The Nervous Breakdown.  She is a book reviewer for NYQ Reviews and won in the Poetry category for the 2011 Over the Edge New Writer of the Year Competition in Galway, Ireland.