In his poem “Memorial Day” Kaveh Bassiri tells us:

My absence is momentous. When I left Tehran, a revolution
……swelled in my place. When I left Berlin, the wall came
……down. And when I leave tomorrow, the airports will close. 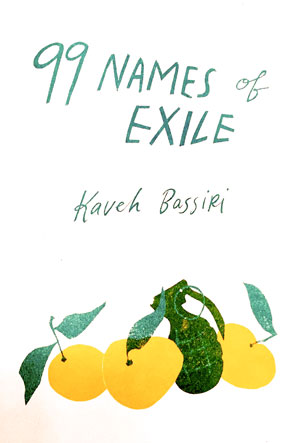 It is inside this momentous absence that Kaveh Bassiri’s prize-winning chapbook 99 Names of Exile traces its focus⁠— a conscientious unravelling of what it might mean to be gone from a place and have it be (at least partially) gone from you. The specific absence Bassiri focuses on is accompanied by a sense of irrevocable inaccessibility; it comes after forced immigration and it leaves behind it a different Tehran, a different Berlin. This exile is complex and shifting, it is not the product of a static or singular expulsion, but perhaps more accurately, it’s an imposed exercise that takes continual effort survive. Later in “Memorial Day” the speaker notes “Each morning, in order not to sink, I have to bail the news out/ of me.” Staying aloft is not a default in Bassiri’s poetics of absence, it too requires a constant expulsion of words as news contends with personal memories. At its height, Bassiri’s work exhibits a living and moving exile that fills and empties, critically and poignantly resisting the urge to allow neither nostalgia nor fear alone to take full residency of the past.

99 Names of Exile begins in landscape. In the absence of the body of a deceased loved one, the book’s first poem “Invention of Country” searches for  a buried “uniform/ in a chest camouflaged as a scarab, its wings latched.” The poem goes on to ruminate on memories and details the speaker wishes they could conjure in the face of death, but cannot. Perhaps inspired by this loss of detail and still searching for a path to grief and intimacy, the speaker explains “I don’t trust flat surfaces” and “I know the earth is round, and if we continue falling,/ the afternoon’s revolution never grows cold.”

Instead of a portrait-styled elegy, this piece zooms out wide enough to catch glimpses of the planet’s rotation and never names the dead person it’s seemingly dedicated to. While it includes identifying and minute details like “blue socks and porcelain inlays” of the subject, the majority of this poem is faced with finding peace in an empty grave, in the remaining “exuviae” of what it searches for. It comes to rest saying “Surely they can find you/ among weeds in the sandpit, the briary fleece of the hills.” taking solace in a literal landscape. Whether the reader takes this as hope of recovering a body or a contented knowledge that something of the lost loved one exists in the environment, Bassiri still leaves his audience at a distance. We are given the fine specificity of “porcelain inlays” but we end on “the hills” having seen that “the earth is round.”  Similarly to the speaker, we do not have access to the coffin, the conventional proximity to and possession of a body, or even a clearly-identified person to mourn. Here the elegy itself is set in landscape, set off from what it tries to reclaim and remember, in its own exile.

Along with giving distance a life (and deaths) of its own, 99 Names of Exile does not leave distance, whether chronological or physical, as a blank space or empty wall. Distance, loss, and absence quickly become dense and crowded spaces. The speaker listens to a phone message from his father where “Reports of celestial bodies contaminate the silent bridge between us” and the speaker learns that his sister has been taken to jail. Within these conversations between a father and son, between Tehran and an apartment in San Jose, the speaker feels that “The Azadi (“Freedom”) Towers” between himself and his father’s life. This line from the poem “Alarm” references the Azadi Tower in Tehran and also fills the space between the answering machine message and the voice of the father speaking into it.

While “the roses in custody” at the speaker’s table are “closed like fists” and “the radiator trembles in the corner,” there is a feeling that this apartment in San Jose is, by the mechanics of a voicemail and this prose poem, pushed suddenly proximate to the “Alarm” experienced in the home in Tehran. Flowers are fists and the radiator trembles, things without bodies take on the symptoms of a human body in fear, and so the room floods with the news that the speaker cannot immediately bail out. “Alarm” rings with Bassiri’s ability to make the distant and intangible feel close, human, and unavoidable. 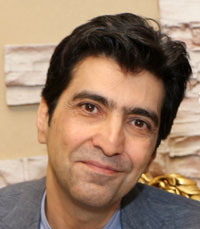 99 Names of Exile contends with a home and a family that is both deeply missed by the speaker and one which, as his father warns him, could be potentially fatal to return to. Iran, and Tehran specifically, surfaces in memories, monuments, familiar homes, and a lawn “stretched out like a prayer rug.” The speaker’s recollections bleed into how he sees the world around himself away from Tehran, where the security gate at an airport is a “mihrab, the incantation of departures and arrivals” and “Farsi” becomes “Persian” when it’s spoken about in English. These poems invite the reader into a way of sight, into the joys and aches of not being able to unsee a home, even when it’s been made inaccessible. Though Bassiri writes in “Memorial Day” that:

My family loves divorces. My father divorced twice. I’ve di-
……….vorced my country more than once.

His poems also critically cultivate undeniable and even bodily connection to a family and a place he no longer physically occupies. At the poem’s end, the speaker seems to exhume his own body in a pre-mortem exercise, saying “If you open me, you’ll find cyprus leaves, the smell of traffic,/ the misquoted words of Hafez digesting with Cheerios,/ dates, and naan.” Near the end of the book, the speaker performs a similar exercise on his father, lifting his chest and finding “Splayed, his pelvis filled with leaves.” There is a familial link legible in the cyprus and pelvic leaves growing inside this father and son, one which gestures to the many gardens that the poems in this book seem to mention, search out, and yearn for. Bodies in 99 Names of Exile are shown to contain many possible names, contain shared gardens, contain language (even if it is digested at a similar rate as the accompanying Cheerios,) and, in doing so, manage to contain literal Whitmanian multitudes that connect them to a past.

Whether it’s in “the briary fleece of the hills” where a lost body is sought or in “the fleece of my sleeve” the speaker uses to “Wash off the blood” in the last two lines of the book’s final poem, material spaces and insurmountable distances become populated with memory and emotion. While Bassiri himself writes that “from a distance everything turns scenic” his work is also invested in using the poem as a space for landscape without sacrificing its potential for intimate, detailed, memorial, and occasionally distinctly non-scenic work. From touring the interior of an atomic bomb to the light scraped out of and iris to the irises found inside a dead body, 99 Names of Exile presents a narrative of personal immigration and exile that is incapable of being nested under one name alone. 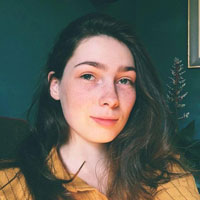 Cleaver Poetry Reviews Editor Claire Oleson is a writer hailing from Grand Rapids Michigan. She’s a 2019 grad of Kenyon College, where she studied English and Creative Writing. Her work has been published by the University of Kentucky’s graduate literary journal Limestone, Siblíní Art and Literature journal, Newfound Journal, NEAT Magazine, Werkloos Magazine, and Bridge Eight Magazine, among others. She is also the 2019 winner of the Newfound Prose Prize.  Contact her by email.