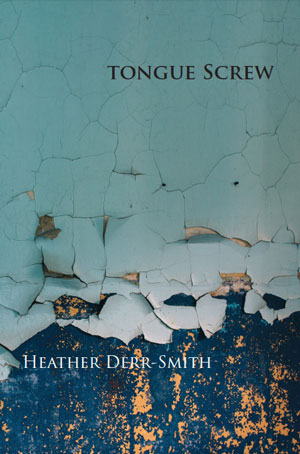 There is Sylvia Plath’s Ariel. There is Ted Hughes’ Animal Poems. And then there is Tongue Screw. May we justly call it confessional? Not without complications. What gave Plath and Hughes, that broken set of matching china, their staying power is not the impulse to tell all, but the containment of raw human experience within a careful structure of implacable imagery. Whether they influenced her, or whether she found her independent way through a haunted yet familiar landscape, Heather Derr-Smith uses the wound of image in each of her indelible poems.

Speaking in an interview of personal experience, Derr-Smith acknowledges how she renders emotion in terms of objects. Her mother’s way of departing for a moment from suffering was to take her child into a room and show her “Swiss chocolate, a music box from England, antique books from the 17th century with hand-painted illustrations, an old bible with flowers pressed in the pages.”

Over the chain link fence, three bald eagles fight for their kill
on the train tracks. My brother writes a postcard

from someplace near Bagram, fog veiling and unveiling
the Hindu Kush. In a dream he lifts his arm to cover his eyes

and I kiss the top-stitch scars along his mended wound.

Hughes and Plath would consider it a very good day to improvise this terrific, garish, wince-inducing, violent yet controlled outburst:

The sutures of the dead wolf’s skull,
were like outlines of the continents on a map of the world.

Half decomposed, he was once Alpha,
his remaining fur still speckled with ticks.

When he hunted, radiance exhaled from his mouth
like waters breaking from a new mother’s legs.

A trail of blood led us to him,
his claws still extended with lash.

Apart from her kin, the father coming and going, with his charismatic, mercurial love, the step-father abusive, the mother crouched in half-shock, emerging just long enough to love before retreating, what also separates this book from confession is strong political content. It’s subtle, not dogmatic, and well informed. And once again, it’s sheer experience encased in images:

Crossing the bridge, I look down
on the snowy white bend of the frozen River Miljacka.
50 below zero. Flocks of geese huddle,
a convocation of dark bodies on the ice. 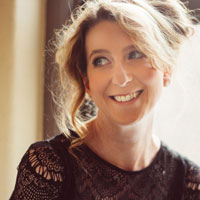 “Wild dogs, nipples black with new birth,” serve as an emblem of dying and emergence—not a symbol, for this collection seldom lets us breathe enough to think, much less to travel into abstraction. So if it’s ‘breathless,’ we are the ones suffocating.

Suddenly wells up a swift barrage in which Sarajevo’s harsh, melancholy, damaged spirit, battered with strife gets glimpsed:

the tracers of bullets burning brightly in their trajectory
the scissors they used to cut off a child’s underpants in the morgue
the eggs left coddling on the stove of someone.

Dry-eyed, Derr-Smith is not apt to let us drift off into vague sentiment. In the most personal poems, in which unspeakable moments are spoken, the attitude is look at me or don’t. Be a voyeur, and you might see a sordid or tender scene. Either way, the verse will stare you down:

My stepfather said I had a tight little ass as I ran out the door.
Small leaves scattered on the sidewalk, like chips of nail polish, hot pink.

Somewhere the funnel rises
like a girl, mouth bound with cloth.

The poet doesn’t dwell on any single moment. Thus she favors the couplet, with its swift attack. One of the most brutal poems of this type is “Butcher, Sarajevo.”

The chill air smelled of meat.
I wore a yellow belted dress and high heels the color of bologna.

You pressed your hip against me.
The hot afternoon waved in the windows.

The man behind the counter smiled,
two lovers in a foreign land.

I imagine Ted Hughes in the midst of smiling approvingly, just before Derr-Smith gives him an eight-line smackdown.

It is welcome to come upon a poet who veers off from the current tendency toward broken lines, half-sense aforethought, in favor of conventional stanzas and a compellingly clear narrative sense—yet blowing those stanzas apart with the force of the images and a heartfelt tone that one might say shreds us with it compassion. Shrapnel under the skin never felt so good. Even if every moment of every line is ‘true,’ I don’t care. It is more a truing of a wheel, than any sort of confession. Maybe that’s why Spark Wheel Press was the perfect destination for this volume. For this wheel does throw sparks, whether on the sky’s parchment or the dry grass of home.