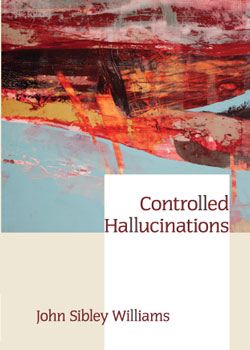 Controlled Hallucinations is a collection of questions, interiors, and barriers—stepping into the world of these poems means being alone with your thoughts and the images and associations your brain creates only in its quietest moments. The title of the collection already suggests that these poems will occupy a space far removed from the outside world, but John Sibley Williams invites readers into this space with an introduction to the collection in the form of an untitled poem (following the dedication, which is to “the coming extinctions”). The introductory poem is a series of infinitive clauses (“To be the effect. / To be a thoughtful pause / and restrained response. / To the the passion of raking nails.”) which collectively define what can be expected from the ensuing poems. 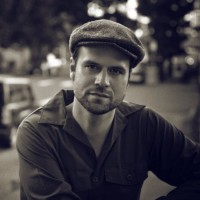 Williams titles his poems only with Roman numerals and visually speaking, the poems do not set themselves apart from one another any more than their numerical differentiation—though they vary in length, the poems have short lines and stanza breaks obey only the internal rhetoric of the poem’s meaning, not an external metrical scheme. The absence of titles or great variation in the tenor of the poems makes the reader feel as though they are reading an extended interior meditation from a single speaker on what it means to think, to feel, and to know.

Many of the poems pose questions to this effect—especially the first three poems, which pointedly introduce this rhetoric of questioning—all of which ask both what it means to know and how it is that we language “knowing,” as in the short third poem, which contains the most beautifully compressed articulation of this idea:

Williams primarily uses a first person speaker in these deeply interior poems, but even when he evacuates the speaker altogether there is still a sense of a sparse vacuum of thought. There is no sense of a world beyond the space of the poem, few competing voices beyond the speaker’s, few observations that seem to come from anywhere besides the consciousness of the speaker’s own thoughts. Silence and solitude blanket these poems as much as the white space around them on the page, and it is not long before the reader finds themself drawn deep into this world where thinking and feeling are the only language. Williams articulates this internalization with sound—in the (welcome) absence of rhyme and meter, alliterative and assonant sounds, and even simple repetition provide the links between lines:

The paper cut on my palm
runs parallel to my love line.
They taper off at the same spot,
under my thumb. (IX)

The sounds of the poems slow the reader down—instead of racing through the short lines, the reader wants to read closely for these subtle, savory moments of sonic connection.
Each poem opens and closes like a window and is gone the moment the reader moves onto the next poem—the fact that every poem resolves itself with closed punctuation (periods and question marks exclusively) sometimes leaves the reader wishing some would open out to the world beyond the poems, a kind of coming to the surface for air after a long, deep meditation, but the reader is also left with the feeling that they needed this time of retreat from the world of certainty.