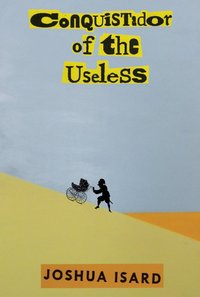 Joshua Isard’s Conquistador of the Useless is a novel of vertices, exploring the terrain of transitions, where cultural ethos and personal identity evolve in phase. It is this vague middle ground, the no-man’s-land between good ol’ days and dreary futures, where our protagonist Nathan Wavelsky traverses in apathetic strides. The use of this structure manifests in an insightful and poignant exploration of meaning and meaninglessness in contemporary life. What does it mean to live outside the narrative arc?

The novel opens with Nathan and his wife Lisa moving out of the city of Philadelphia and into the suburbs. The move marks a return to the land of his childhood and the end of his rebellious twenties. But Nathan isn’t home in either world. He is neither young nor old, urban nor suburban. The era of his young adulthood has concluded and the shifting cultural tide presents him with the uncomfortable truth that all of his once grandiose, youthful angst has accomplished nothing—the experiences which once felt unique and infused with importance were, in fact, no more than the standard benchmarks of growth that all young people pass.

Perhaps worse, the suburbs, he realizes, represents a kind of giving in. Observing the tame lives of his conservative neighbors only reinforces this view in his mind. The suburbs, he says, are “the place you spent your teenage years trying to leave. Lisa and I felt a little defeated looking at homes in our old school district.”

Still, Nathan capitulates. He observes his transformation, from grunge loving, city-dwelling slacker into suburban tree enthusiast. “I’m sitting on a folding chair I brought out to my own patio,” he says,

… Instead of a fence, my half-acre back yard has spruces along the property line, which means that I can’t see much into the adjacent yards, and my neighbors can’t see any more into mine. What I can see is the tops of some tall trees, including Tom and Kristy’s pin oak. That’s going to look incredible when autumn comes around.

The horizon, of course, is marred. Beyond the trees lie the predictable landmarks of suburban life. Lisa soon will broach the subject of children. Nathan will receive a promotion at his corporate job. It seems as if every facet of his life has been absorbed into the narrative of the suburban mundane. Nathan’s had hardly a second to adjust. 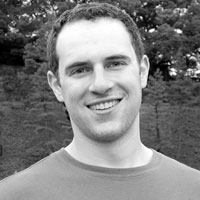 In fact, he’s caught off guard. When his new neighbors stop by in a panic and ask if he and Lisa can babysit their fourteen-year-old daughter, Rayenne, Nathan’s failure to recognize himself as an adult leads to a social scandal. He develops a fondness for the girl and spends the time discussing music and books with her. After a flashback scene exploring Nathan’s nostalgia for his own teenage years when older kids provided him with mix tapes of cool music, he hands Rayenne a flash drive filled with some of his favorite tunes. The next week, Nathan invites Rayenne over and offers her a copy of Kurt Vonnegut’s Cat’s Cradle. The girl’s ultra conservative parents are appalled when they find the book in her possession and even more distraught to hear that Nathan brought her into his home. Within days, Rayenne’s parents inform the entire neighborhood that he has given their daughter pornographic literature.

This chaos leads Nathan to accept an invitation from his bachelor friend Mark to climb Mt. Everest. With no prior experience, the absurdity of the situation is evident. Isard sets up all the pieces for epiphany. The parallels are all in place, with the climb up representing the past (city, youth, nineties culture, Lisa as girlfriend), the peak representing the time of transition, and the return down representing acceptance of the present and future (suburbia, adulthood, millennial culture, Lisa as mother).

At this point in the novel, it isn’t hard to feel frustrated with the courting of cliché. A journey into the mountains to find one’s self is all to frequent and familiar. By the time Nathan begins considering a trip to Nepal, his apathy and habit of name-dropping alternative 90s bands (Nirvana, Pearl Jam, Husker Du) had also become tiring.

But here, Isard shifts, smothering my preemptive critique. While all arrows pointed to a spirit quest—one that would leave our grumpy narrator enlightened and free to be happy—instead Isard gives Nathan an authentic transformation. The ending of the novel saves and elevates what could have been an unsatisfying book. By providing him a means of escaping his own apathy and evolving out of the transitional fog into something like a whole human, Isard does the impossible for Nathan.

Without spoiling the ending, the following conversation between Nathan and a member of the climbing team prior to departing from the base camp of Everest reveals our narrator’s attitude about this venture:

…Do you mind if I ask why you’re here?

Same reason as everyone, I say, to climb the mountain.

No, that’s not what I mean. Why do you want to climb it?

That’s what my wife asks me. It’s hard to say, really, but I’m here more or less because it’s worthless.

It’s not easy to explain, I say.

Would you mind trying?

I have, a few times, but it never seems to be clear. I guess it’s that I grew up with all my grade school teachers telling everyone that they could do incredible things with hard work. My parents were the same way. They’re still that way, actually, always telling me that I can do something important. They never told me that I might not want to do anything important.

This passage provides, for the first time, a cause of the Nathan’s apathy. He is not simply a whiny 90s emo-guy. His condition is far more interesting. He is a living protest of dissatisfaction, seeking the useless in a society where everything must serve a function. What makes this a thought-provoking insight is that Nathan’s quest for the useless is merely a thin linguistic façade concealing the logically equivalent truth that he is seeking the meaningless.

Isard’s debut novel, while initially frustrating, ultimately succeeds in exploring the maturation of the apathetic individual. Nathan’s evolution from ornery 90s cliché to absurdist hero is well worth the read. The authenticity of the author’s voice and lack of literary pretension also makes for an enjoyable experience.

Jon Busch lives in Manayunk, Philadelphia. He graduated in 2012 from Bloomsburg University with a B.A. in Philosophy. When he’s not proofreading pharmaceutical drug labeling for a living, he spends his time writing short stories, reading, and playing music.