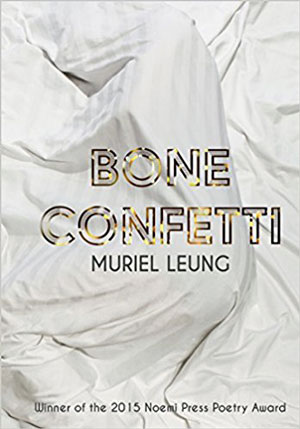 Muriel Leung’s Bone Confetti is an open door into a house of mourning; an exceptional look into the aftermath of loss, and in turn, an examination of what it is to love someone. A challenging collection of lyric and prose poems, the poet manipulates the space where words are carefully placed and the space where there is nothing. The theme of the book is grief, and it is palpable. It is disorienting and enveloping, but manages to avoid being overly sentimental, allowing it to be both intimate and universal. The poet stated in an interview that “applying the role of politics to the personal grief of loss was very important work to do . . . It became a way of understanding this loss as tied to a history that’s larger than me.”

The book is broken into four segments: In Absentia Land: A Romance, In Absentia Land: A Funeral, In Absentia Land: A Wedding, and In Absentia Land: An Epilogue, each exploring loss with individual focus on aspects of what is left in its wake. Collectively and thematically, the poems evoke the myth of Eurydice and Orpheus, only once referenced directly early on in part three (A Wedding), “So watch me closely through the narrow gates/ of after-world hell.”  Tied to the story of Orpheus, each segment addresses an aspect of the loss, the death, the isolation, the hope, and the aftermath of losing a loved one. Each section begins with a prose poem (excluding the Epilogue) and one poem, “Mourn You Better,” spreads over pages and continues throughout each segment, acting as a ligament or tendon that connects each bone. Some pages contain only a couplet, a breadcrumb of sensation. In this poem, the poet transforms space into time. While many of the poems throughout the book are dense, and give a sense of urgency, “Mourn You Better” slows down the world, if for only a moment. “The bones go clacking up the chimney. Time used to / mean, Let us be better to each other in the now. Today it means—” and she breaks, continuing on the next page;

Don’t wear red on your wedding day.
Suck salt off your thumb.
Don’t cry.
Go on. Live without me.

“Mourn You Better” stretches the flesh of the book, reminding the reader to love in the present without fear or shame.

In part one In Absentia Land: A Romance, death is still fresh. The speaker deals with a grief that is here and now. She touches on the benevolent gestures made to those who have lost loved ones, and the silent acceptance that they are simply gestures, impotent charades. The poet concludes this section, “This is how I / want to love you—mouth full of cyanide kelp and the words that soot. / By way of book and bone, we opt to mimic-pray.” The speaker moves through the motions of life after, ghost-life without meaning; a lost heart. “I am making an inventory of all things. The body pulp in mason jars. / Something of consequence. An ash of you.” she says, continuing on to speak of red specters who bring flowers that turn to smoke. “You appreciate the gesture, pour them tea. No one talks about / what they have lost,” she concludes. The poet addresses the well-intended, but unwelcome pretenses of outsiders, the pain and frustration of potential, and the mercy of silence. Her language is disjointed; sentences do not flow as cohesive thoughts but disorient and dazzle the reader. These are poems full of clear and sharp pains that exist in the constant fog that one experiences after a major loss.

“Absentia land: A Funeral” deals with death and the isolation the survivors are left in. The first poem of the section starts, “When I pluck the marbles from my eyes, you are wholly vanished.” In A Funeral, the language is corporeal, looking at death from both a physical and pragmatic standpoint. It is done and cannot be undone. “Evacuate the bones, / let the skin hang dry. A pale flag upon a once body. Uninhabited. / What stillness will love you now: nobody, no one, nothing.” Her words are haunting and echo of florescent solitude. It is about the fear of forgetting and moving forward and away from the companionship she once had.

In A Wedding, she deals directly with death and companionship, and evokes the hope that when the survivor dies, they can be together in death. “I take her hand and pulse hard / into the forever-morgue. My darling, / I will go wherever you go.” This is not a boisterous hope, but one full of longing and anguish. The language in A Wedding also has the same corporeal quality that a funeral has, but introduces sexuality alongside the idea of physical death. She revels in sensory imagery, focusing specifically on touch, and does so masterfully. “Touch me in the flint of a blank corridor when / the world heaves into many bends—let it funnel into fever.” She concludes the final portion of “Mourn You Better” very simply— “Only sometimes do I think of the way you touch.” The statement is so simple, and yet I feel the stones it creates in my belly and my throat, so full of significance and heavy with ache. It also serves as a perfect segue into the following poem, in which she discusses touch in more depth, its sanctity and the effects that it holds over us. I found frequently in these first three sections that the poems did not go to the part of my brain that thinks, but the part that feels. In contrast, An Epilogue, her final chapter, is both the shortest and the most removed.

An Epilogue consists of two poems, both of which spoke to my eyes. They describe what appears to be the end of times. Whether we are meant to understand them as literal or esoteric or political, I’m unsure; either way, it is effective. Leung’s writing is breathtaking and evocative. She finishes her final poem, “Memory frayed, everything frayed. / No longer a viable space for feeling but then came the mourn. / See city so lovely and lonely in its after-after—just a little bit touched.”

There were moments in reading Leung’s poems that I felt choked, not by a hand around my throat but by delicate fingers closing off breath in my lungs, leaving a pressure in my chest, an abyss that can only remain as it is. This is what her poems in Bone Confetti do, they present the absence, a wound that was torn open by loss, a wound that will always be present no matter how many remedies one may find to attempt fill the hole. These are the words of an individual mourning and in love, and the pain is in each word of every poem, unresolved, even in those where hope is present.

Marilynn Eguchi studies creative writing and biology in Chicago. She is the winner of Truman College’s English Department Literature Award. She plays cello in a comedy band and writes and performs stand-up comedy. She spends her free time learning and practicing Brazilian Jiu-jitsu.

AFTERGLOW by Eileen Myles and THE STRANGERS AMONG US by Caroline Picard, reviewed by Jordan A. Rothacker