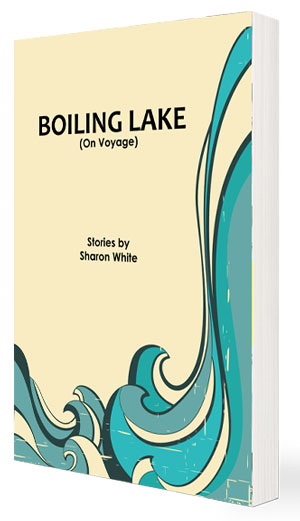 The short flash pieces that comprise Sharon White’s Boiling Lake read like dispatches from a dreamscape—or perhaps a nightmarescape. Surreal, dark, and unmoored from time, these journal entries are well-crafted machines that merge fairytale, myth, and history into concise forms spanning no more than a page and a half.

While some of these stories build narrative bridges—recurring characters include a girl nominated for sainthood and New World explorers reporting back to higher-ups—many exist as discrete moments, indulging in provocative imagery without the expectation of elaboration. There is skill in this work that allows one to dwell in the temporary, to savor the fleeting:

The water is cold as hell and it takes awhile for the wet suit to work but once down there it’s great. Once I stayed almost my full time watching a starfish ingest a mussel. The starfish put his body against the joint of the shell and injected a muscle relaxant so that eventually the mussel couldn’t hold itself shut. I could watch fish forever. What will I do in Kansas?

In brevity White builds the infrastructure for a reader to extrapolate upon; she gives us just enough to grip us before cutting us off, leaving us to cocreate a world. The microcosms she hints at are fascinating, bizarre—sometimes rooted in history, sometimes seemingly present-day, and occasionally utterly unplaceable. Often they veer into disturbing territory, as in “Marble Steps”:

The priest’s arms and legs dropped off as she held her hands out to accept the host. They were bloody and looked like the pictures she had seen in newspapers lately. Severed limbs. But this was church and she had been told not to speak or laugh or cry. … Soon the priest was just a torso on the marble steps of the altar. … Was she supposed to eat the host at this point? Couldn’t the body and blood of Christ do something to put everyone back together again? 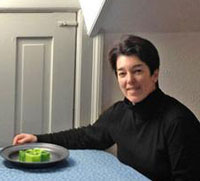 Mutilated priests, cannibal rituals, fetuses in sleeping bags, body horror: these are the grim (Grimm?) specters of White’s prose. One has to laugh at the English colonizer’s hubris in “The American Hedgehog,” whose report claims “there will be no beasts that bite left”: White’s stories are littered with beasts, described in such rich detail as to suggest an irrepressibility. Darkness haunts Boiling Lake in a way that feels congruent with the book’s section titles (“Earth,” “Fire,” “Water,” “Air,” “Aether (or spirit)”); it is elemental, intrinsic to humanity and the sites that humanity inhabits.

Boiling Lake is not, however, all nightmare. White’s stories also thrive on curiosity, intrigue, and moments of optimism. “Islands,” for instance, features a seventy-year-old who takes a trip to the Galapagos after a lifetime of yearning to go; “A Table of the Best Cooked Birds” features mythic explorers finding “the most beautiful place [they] had ever seen.” Whatever the tone, and wherever the setting, White’s strength is in captivating first lines. The first line of the book reads:

A man came to me today and wanted to buy my nipple.

And it’s in good company throughout:

We all read your letter and can’t understand hide nor hair of it. What are you talking about? (“Two Cows”)

Was it his teeth she wanted? (“Polished Wood”)

The cannibal was able to place only a portion of her body in his mouth, so he decided to leave her there on the island. (“Friends”)

I’m a rock hound you know, a woman who loves rocks. (“Twins”)

Orlando wants to be a murderer when he grows up. But he did write a page about it. Mixed blessings. (“Sleeping”)

Wildly imaginative, White jangles the absurd around in her pocket until it’s polished into something that almost makes sense, almost feels real, and always draws the reader in. The experience of hopping from piece to piece in this sea (lake) of ephemeral wanderings is difficult to describe (better just to read White’s prose itself), but rest assured that it’s a thought-provoking and adventurous experience. One may never know what sudden surrealism awaits in this text (“The worm is everybody’s friend. He’s my friend first. We kiss and it looks like fighting.”), but that is the pleasure of voyage, and White invites it.

A section from Boiling Lake originally appeared in the story “Panic“, in Cleaver’s Issue No. 8.

is the managing editor of Jacket2. Her work has appeared in The Pocket Guide, the Philos Adelphos Irrealis chapbook, and McSweeney’s Internet Tendency. She cohosts a podcast about witches with Maya Arthur and tweets @kennaoro.