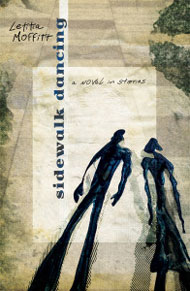 A sidewalk dance is the step or two that strangers on a sidewalk make together in an effort to get out of each other’s way. Sometimes, says Letitia Moffitt, they

naturallly move in tandem, like dancers, until they collide. Sometimes they stay that way, perpetually in each other’s path, never moving past each other.

This suspended state of existence—one imagines cells tumbling around a petri dish—infects Moffitt’s novel Sidewalk Dancing (Atticus Books), the story of Grace Chao, a Chinese immigrant to San Francisco, and George McGee, a peripatetic and dogmatic city planner, who intercepts Grace at the diner where she waits tables, and pulls her half knowing into a life of mutual abeyance. The couple moves to Hawaii, where George designs an impossible house, fails to convince his colleagues of the importance of the latest planning ideas, and loses in a bid for city council of the town of Windward Oahu. They have a child, Miranda, who narrates some of the chapters of the book.

The three McGees each struggle with identity. George has run from his unassuming Pennsylvania origins; over and over again he seeks the other to awaken his soul and lend meaning to his life. In Grace, apparently inscrutable, he sees another equally out of kilter. Grace is an artist, who can’t abide the impractical, an immigrant who isn’t sure why she desires to be American, if she does. They carry Miranda along in their fraught dance so long that as an adult she is wary of the search for an ethnic identity: it can’t seem to lead anywhere good.

Moffitt has a straight, dry, insightful prose style especially suited to Grace’s silent suffering as an outsider, never able to connect or feel at home, even in Hawaii. “I sometimes felt,” says Miranda of her mother, “that she was in perpetual retreat, withdrawing into something like the tunnel of a snail’s shell, an endless vacuum tube spiraling inwards, and away from the opening to the world, compressing into the claustrophobic space inside her head.”

While Grace, who is brittle but also tough (far more resilient than her husband), detaches, George fumbles and falters. All of a sudden,

He was not a young man who astonished and impressed people when he told them of the places he’d been and the things he knew. He was a middle-aged man whose lifelong experiences had been rendered into idiosyncrasies—mostly harmless, at worst a nuisance.

The portrait of these two figures in the setting of 1970s and 1980s Hawaii is the book’s clear strength. Moffitt understands their insistent, nagging contradictions; she hears their silence, especially as it strangely rains down on their daughter. And indeed, the perspective is welcome. It’s just this—the layers of silent suffering, shame, confusion—that Moffitt knows she has to explore if she’s going to turn this particular version of the immigrant experience into literature that matters. She seems aware of her special view; Grace wonders why Miranda, apparently an aspiring writer, can’t turn their family story into something like Amy Tan’s The Joy Luck Club. Miranda counters that she isn’t interested in that sort of maudlin fiction. “I know everybody read Tan,” Grace responds in turn. “And see the movie. She writes more like real life, like a true story. Those other writers, they may be trying too much to be writing literary. Too strange, too hard to read. Nobody understand them.”

Sidewalk Dancing isn’t hard to read. Moffitt’s prose is polished, but of course it happily lacks the necessary clarity of commercial fiction. And yet, about two-thirds through, as the story’s focus shifts to Miranda herself, the prose becomes “like real life” and ultimately banal. Somehow the tightness that bound the first two-thirds of the book—prose that had obviously been worked hard and clean—got lost in an effort to bring the story to the present, perhaps because Miranda herself is too close to Moffitt. By the end, the reader finds himself disinterested in Miranda, longing for Grace’s compelling, frustrating passiveness that he feels must somehow be wise.