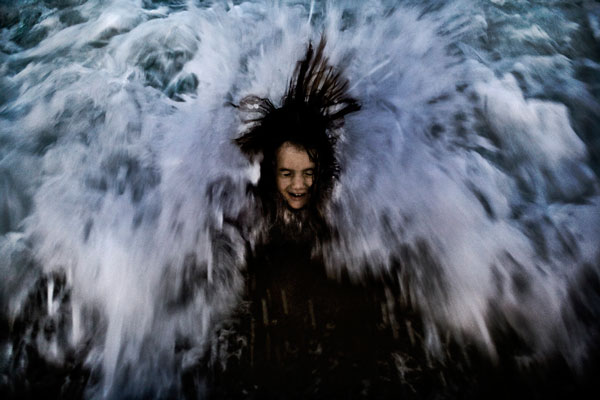 I was twelve when my Daddy got a long iridescent motorcycle, his first to my unemphatic, unpathwayed, what-I-recall. I wandered the shop façade near the cow-bell laden door, while he strode around back to cast a final gaze at his newly purchased ride. I perused the store in white leather sandals, ambulating back and forth among the sharp smells of steel and sawdust, amongst the stink of after-shave, rubber, and gasoline, under the reverberation of bleak fluorescent lights. I yearned for something to read. When Daddy returned, I laid hands upon his new manual and parked myself outside Jim’s Hardware atop a cooler, foraging for spelling bee clinchers: crankshaft, flywheel, cam chain, hydraulic steering damper. I was to be a world champion speller; I was to win the national spelling bee in the great capital of our country that very spring. Daddy predicted it and I prayed upon it. I would soon be a part of the history of this great nation. The cow-bell clanked obstreperously (the world with which I won the regional bee) and Daddy descended upon me and set me behind him on his new hog. We were homeward bound.

When not shuffling through the delicate pages of the American Heritage Dictionary, I rode with Daddy on his new bike, the child in a swarming sway of age, leading his posse deep into the country along Dog River, under the bright Alabama sky. I’d sneak stones in my pocket, paw them up from underneath the porch and aim them for the river as we sped beside its churning tawny waters.

I was twelve that spring Daddy bought his new motorcycle, the same age and season in which he would be struck by lightning, besieged through the phone line with such pernicious force that he suffered cardio-pulmonary injuries and electrocardiographic alterations. After this, his mind embarked. Daddy stowed the milk in the cupboard after dribbling it over the cat food he mistook for cereal. He attempted phone calls with the TV remote. We scrambled to rise early and feed ourselves. Mama hid the keys to all forms of transportation in the neighbor’s garage while Daddy spent time recovering on the front porch, poring over the dictionary in order to grill me for the bee that, despite his trauma, we remained destined to win.

We had built our house atop the shallow, brackish Dog River, which snaked its way through our front yard on its way to its tidal estuary near Hollinger’s Island, which connects the estuary to the northern reaches of the Gulf of Mexico: the grand Riviere Du Chien, which Daddy had not once had the fortitude to enter. Though I am aqueous, I am not aquatic, he announced, making me spell both. It’s the aqueous part that acts as a conductor of electricity, he explained. Electricity needs a conduit. (Pause for the spelling of conduit.) A conduit is something that transfers electricity. I do not swim. I do not tube. I do not float. I do not engage in landless activities.

Daddy being hit by lightening changed everything, the event preceded by ominous signs. The morning woke with swollen gray pupils. My ruckled senses unfolded. My sister Misty and I regarded each other, sensing the stillness preceding a great storm. Everything was stopped, looming, hindered, except the small stream of blood that poured from between my legs and bled into the cotton sheets.

No one’d warned me about menstruation. It was a word we hadn’t practiced. I didn’t know the blood would be so . . . effusive! Daddy threw me a rag towel to sit on and presented me a new set of words to memorize. Then he scrambled to hunt for the remote to call the drug store for a delivery of tampons.

Mama was a traveling saleslady. It wasn’t her fault she was perpetually absent. Nobody else I knew had a mama like that. Other kids’ mamas stayed home. Daddy took the milk out of the pantry and set it on the table for me and Misty, along with a box of cat food and some plastic forks. Meanwhile, I stuffed my underwear with toilet paper, put on an old short set, and headed outside with a tube of Neosporin to clean the wound on Less Yellow, my nebulous, wandersome feline! Each night, while Misty and I lay together in syrupy-headed slumber, his muffled muroooowls swung through the wind—awoo—caught on the end of the bullfrog’s watery croaks, which together initiated dreams of the church choir’s accordion solos reverberating through the wooden floors and up through our leather dress shoes and our lace-trimmed Sunday socks.

The storming had started in earnest the night before Daddy was hit. The eve of the precedent was mad, and the sordid air hung about in spastic fits. Misty and I were deep in our bed. Daddy was deep in his bed. Mama was tucked into her bed in a Holiday Inn somewhere in Mississippi. The windows were secured against the boreal winds, but the air slammed and jammed to the fremitus of the clicking, kissing, static in the fat-mooned eve. And I knew something was coming, something big and as far away as God Himself.

By mid-afternoon, the stillness was ending and all the things in the universe tingled up. Less Yellow returned from his wanderings, fluffed his tail and shed like a dried up Christmas tree beside me on the porch where I sat looking at the river and watching the road beyond, waiting for Misty’s yellow bus to come galloping to a halt. Together we sat on the porch steps, throwing rocks hard across the lawn so they’d reach the river.

It wasn’t long before the thunder and long corvine screams embroidered the sky and frightened all the infants in the universe. Misty and I sat together on the porch, crowded in concentration and fear while heavy dark colors fell from the viscid sky.

Inside, hooked to the screen, Less Yellow peeled back his ears and opened his green eyes wide toward the heavens. He sensed the danger the way only felines can. That was when the zipper finally pulled, the engine cranked, the serpent roared, and the lightening raced down upon us.

It was the END. We all knew it was. Less Yellow shivered like a baby chickadee and Misty turned violet and limp in my arms, forgetting to aspire. I did not know what to do, so shocked and confused I was from the copious air. My red hair tangled itself like snakes around my head and the river itself seemed to beckon us in as the water spit an angry mist into the trees. I spelled words from my Greek roots list: euphemism, euthanasia, paradigm, hyperbole, and told myself not to go in. I thought of the upcoming state bee, and the national, which had been timed to allow us all a glance at the cherry trees blooming in their long rows on Washington’s indelible and wondrous Mall. I would stand beneath the canopy of the most resplendent tree in my polished white sandals, facing the Lincoln Memorial. The blossoms would sway upon their branches and Misty would elevate my trophy toward the kingdom come, shouting exuberantly: Mirabel, Mirabel, Mirabel, river girl, champion speller! 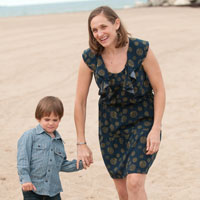 Shannon Sweetnam is a Chicago-based fiction writer whose work has appeared most recently in terrain.org, Crab Orchard Review, and Georgetown Review. She was a finalist for both the 2012 and 2013 SLS Summer Literary Seminars, finalist for AROHO’s 2013 Orlando Prize for Short Fiction, finalist for the 2013 David Nathan Meyerson Fiction Prize, semi-finalist for the 2012 Katherine Anne Porter Prize for Fiction, winner of the 2010 Jack Dyer Fiction Prize, and recipient of an Illinois Arts Council grant. She currently works as a writer at Oakton Community College in Des Plaines.