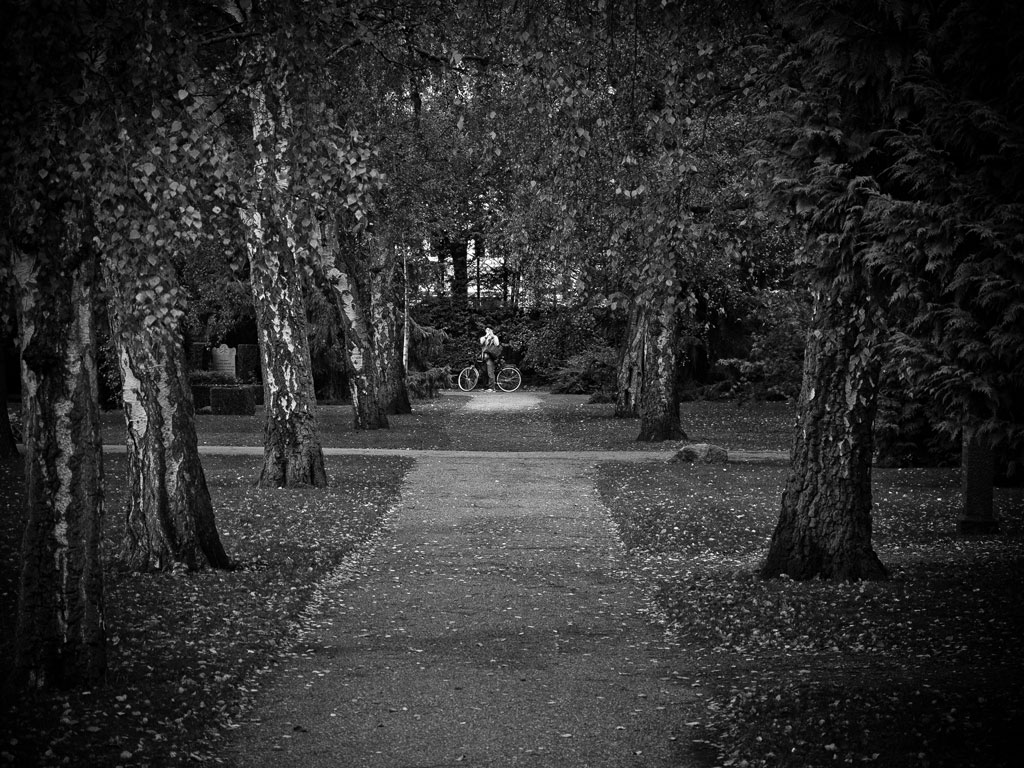 In a neighborhood in the north of Copenhagen, there is this cemetery, though really it’s more of a park.

The locals go on walks there, have picnics, drink in the shade. In the summer, the evenings are cool and infinite here, as though coming from afar, because Denmark is a Northern country. I happened to walk through the cemetery on exactly such a summer evening and so the two have become linked in my mind, the evening and the cemetery, along with a quiet sense of dread which is in essence what I want to tell you about here.

The cemetery is surrounded by an old wall, painted yellow as many buildings in Denmark are, the color of yolk but paler. The paint peels in places, making the wall look even older than it is.

I had been exploring the city that day, wandering about largely without aim when I came across the cemetery. I liked the idea of taking a break in the shade so I picked up some beer and a pack of cigarettes from a corner store and set out to find a suitable park bench.

It had been an unusually warm day but with the evening the warmth sank back into the earth and the alleys that lead among the birch trees and graves were steeped in shade. I walked on and on because I wanted to find a quiet spot, away from everyone.

The size of the cemetery surprised me. After about a half hour of walking I still hadn’t reached the other end, nor had I ever back-tracked.

Eventually, I came across a small square dominated by a tall, skewed oak tree. I settled down on the bench by the tree, cracked open a beer and lit a cigarette.

All was calm and the sky beyond the treetops was a wonderful shade of violet but for some reason an uneasy, grotesque feeling came over me then, like a premonition.

I drank down the beer quickly, hoping to be rid of the feeling and opened another.

I did not notice the man’s approach. He appeared seemingly out of nowhere, just as my premonition had.

One moment the square was empty, the next there he was, whistling tunelessly, sweeping away at the graveled path with a broom.

I wasn’t sure what it was he was supposed to be sweeping up—there were no leaves on the path, no trash either, and yet he was going at it with great vigor, swinging the broom around like someone acting out a sweep in a play.

The man had on a gray cap and a gray uniform, with the sleeves rolled up to his elbows. His arms were very hairy, it looked like they were covered in fur.

I took a drag from my cigarette and tried to ignore the man. This, however, proved impossible.

There was something fascinating, something ghoulish about his person. The more I studied him, the less I could say about his appearance. Try as I might, I could not even figure out the man’s height. One moment he appeared comically short, the next he towered.

It gave me a headache.

By that point, the man had made his way to the middle of the square where he allowed himself a break from his pointless task. He leaned onto his broom, took off his gray cap, and wiped his forehead with the back of his hand.

To my disdain, he then turned in my direction and made a flourishing motion with his hat before restoring it to the top of his head. He wagged his bushy eyebrows at me, then crossed the square, taking comically large strides.

Even as he plopped down beside me, I still couldn’t tell whether he was a head taller, or a head shorter than me, or neither.

“A wonderful evening to enjoy a cool, fresh beer,” the man announced, in English. He had a hoarse voice and a thick accent though it didn’t sound Danish.

I nodded, took another sip from my beer. The man had wide, unsteady eyes, the color of ash. He affixed them on the can in my hand, swallowed hard, like his throat was parched.

“Would you like one?” I offered, despite myself. Surprisingly, the man shook his head.

“No, no, regrettably, I do not drink, many thanks,” he explained, removed his cap again and scratched violently at the top of his head, which I now noticed was balding.

For a while, we sat in silence. A pigeon started cooing up in the branches of the oak tree somewhere which seemed to disturb my strange, new acquaintance. He shuffled about in his seat, let out a huffing noise, and peered up at the hidden bird.

“Where do you come from?” the man asked, his eyes returning to the beer in my hand.

“Just visiting,” the man repeated to himself. He obviously found something amusing in it for his face lit up and he continued, “just visiting… well, well, I am just visiting also! Haha! Yes, I’m also just visiting.”

He got very excited about his, even slapped himself on his thigh which almost made me drop my cigarette. It was a wet, unpleasant sound, like a dead fish landing on the ground.

It must have also startled the pigeon because I heard a sound of feathers above our heads and watched with envy as the bird disappeared beyond the darkening tree crowns.

“Where are you from then, originally?” I asked and regretted it immediately.

The man shuddered and then looked over both his shoulders and all around as though I had proposed something indecent and he feared someone might have overheard.

His weird eyes rolled in their sockets and when he had finally convinced himself that there wasn’t another soul around, he beckoned me to move closer.

I expected him to reek of sweat, or booze, or something but, in fact, he had no smell whatsoever.

He hesitated for a moment, then whispered: “Originally, I come from the bottom of the sea.”

He giggled but I didn’t feel like he was joking.

“Yes, yes, I come from the bottom of the sea. I used to live there, beneath the waves, with the fish. Yes, the fish. It was dark. Here, I am just visiting. Like you!”

“Ah,” I inched away from the man, fumbled for a cigarette. The man fell quiet too. He wasn’t giggling anymore. If anything, he suddenly appeared somber, like something of gravity had just occurred.

He looked at me again. I thought he was making a decision then which sent a chill down my spine. The sun was finally setting and twilight was coming down heavily all around.

Then the man picked up his broom and got to his feet.

“Well, I must be going now. There is still a lot of work left to do.”

Without another word, he got to sweeping again. I watched him walk gradually out of sight. In the thick non-light, he looked like a giant.

A great sense of relief welled up in me when he was finally out of sight. I even let out a nervous laugh. I finished my beer and had another cigarette. There was a deep, blue twilight all around the cemetery now and everything was calm again.

“What a weirdo,” I kept thinking and shaking my head as I smoked.

When I got up to leave, I noticed that the man had left his cap.

I picked it up, turned it around in my hands. It was an ordinary hat, gray, a little worn in places. I really wanted to leave it, knew that I should, but I didn’t. Instead, I set atop my head.

On my way back through the cemetery, I heard a pigeon cooing again, somewhere among the tree crowns. The sound startled me for some reason. I had this odd new feeling in me, like something irreversible had happened, something that could never be undone.

I walked on as the brief summer night settled around me, a few hours of darkness, a few hours of sleep, before the white light of day would emerge from the east again and wash over the world, roll in like waves, like a weightless, invisible ocean. 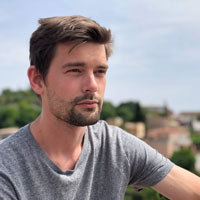 Nikolaj Volgushev’s fiction has appeared in journals such as the Cafe Irreal, The Molotov Cocktail, and Cease, Cows. He currently lives in Aarhus, Denmark where he writes, programs, and does other things along those lines. Before moving to Denmark, Nikolaj lived in New England, and before that in Germany. It is unclear where, if at all, Nikolaj lived before that.