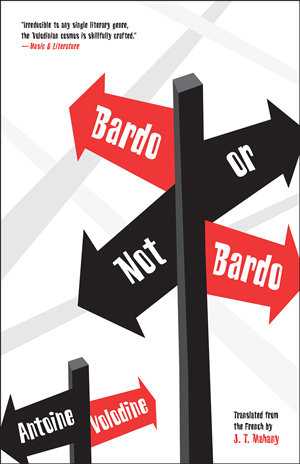 Take the existential universe of Jean-Paul Sartre and pull his pants down around his ankles—this is the paradoxical narrative met with in French comedic novelist Antoine Volodine’s Bardo or Not Bardo. Volodine’s blunt, absurdist style illustrates a marriage between the profound and the comedic, using humor as a weapon to further investigate humanity’s most unanswerable questions.

Bardo or Not Bardo greets its audience with death—a formality granting access to the real meat of the novel: the “Bardo,” a Tibetan afterlife where Volodine’s characters are required, through heavy influence and persistent guidance, to navigate this purgatory-of-sorts for seven weeks. Once the forty-nine days are complete, they are forced to choose between rebirth or religious sacrifice: they can be reincarnated as either human or animal, continuing the cycle of life and death, or they can be abolished from suffering and become Buddha. Reminiscent of Marlowe’s Dr. Faustus, Volodine’s characters, through seven vignettes tracking from death through the afterlife, consistently waste their freedom and their opportunities at enlightenment even while aided by the teachings from the Bardo Thodol, or the Tibetan “Book of the Dead.” Each vignette reads as its own separate story, only tied to its former or predecessor through themes of fatality and rebirth. The characters only matter as vessels for Volodine’s experiment; his ultimate motive within Bardo to is to wholly explore what hilarity occurs when humanity is confronted with its own mortality.

If, like me, you are not regularly inclined to existential philosophy or absurdist humor, I’d encourage you to ignore your predispositions when approaching Bardo or Not Bardo (after all, the book won the inaugural people’s choice Albertine Prize for French fiction). Volodine erases our partisan ideals of religious afterlife and illustrates, through vivid absurdist imagery, how humanity’s real tragedy lies in our stupidity. “It’s sad,” says Yasar, the bartender of the afterlife’s ‘Bardo Bar,’ “thinking about clowns who can’t make anyone laugh.” Death, afterlife,  ascension to heaven, reincarnation is not romanticized here, but rather in Volodine’s hand becomes hilariously flawed, as characters wander aimlessly, selfishly, defiantly against their religious teachings to a fate of monkey reincarnation, creating an isolation shelter inside a sand dune, or simply choosing a life of narcolepsy. Their fortune is wasted, their “path to knowledge” ignored as Volodine creates a striking parallel between the insignificant priorities of the living and, likewise, the dead, demonstrating humanity’s existence a crude cycle of self-fulfilling hysteria. 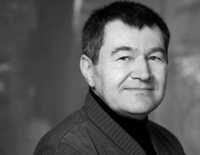 “Antoine Volodine” is the predominant pseudonym used by a popular French comedic novelist credited with twenty published novels, including Post Exoticism in Ten Lessons, Lesson Eleven, and Minor Angels (for which he won the Prix de Livre Inter and Prix Wepler prizes in 2000). The majority of his works are set in a post-apocalypse, where radicals and fools of the “post-exoticism” movement have all been arrested for their non-conformity and subversive attitudes. Volodine also publishes under the pseudonyms “Lutz Bassmann”: We Monks & Soldiers, and “Manuela Draeger”: In the Time of the Blue Ball, among others—while also being an active literary translator of Russian to French fiction. Bardo or Not Bardo was translated by J.T. Mahony, an American MFA student at the University of Arkansas, who has translated other Volodine works prior.

Struck by Volodine’s command of language, I found myself captivated by his sharp authority of wit and profound philosophical questioning, everything pondered but nothing answered, revealing life, death, rebirth and afterlife to be just as absurd as reading recipes from a Tibetan cookbook to a murder victim. As these characters move toward enlightenment, they find their own success thwarted by a fear of failure, and thus condemning their fate like a self-fulfilling prophecy. Take Volodine’s sixth vignette, “Dadokin,” where the title character and a fellow Bardo ghost, Schmollowski, meet up along their journey to a new life. During their time together in the Bardo, Dadokin begins to reveal his insecurities to Schmollowski as they approach their ever cryptic fates.

This horrible wait they’re imposing on us…The walk to the wombs…Waiting to be reincarnated…What if they make a mistake? What if they put me in a bad fetus, huh? If I end up in the body of a spider, for example? I hate spiders…Schmollowski, you won’t let me fall, will you? You’ll squish me right away, right?

Volodine concludes the sixth vignette not by revealing the particulars of Dadokin’s fate, but leaving his audience on a cliffhanger as Dadokin begs for death by “squishing.” We know not whether Dadokin’s fate truly was what he feared, but nevertheless understand Volodine’s intent to illustrate how we as a collective species are, more often than not, our own worst enemy.

The novel’s “vignette” style is not particularly suited for a single reading, in one sitting—but rather consumed in small doses. With each vignette, Volodine increases his expositional language, interrupting the overall flow of the novel, but requiring the complete attention of his reader at all times. Volodine’s writing, not dense, but persistent, peels back layer after layer patiently. Consider this excerpt from the second chapter of Bardo, where Volodine distinctly exercises his subtle skill at questioning life’s purpose through the veil of comedy:

And do you know how you yourself would react? In this situation, in the dark, in fear… What would you choose? Dissolution, or reincarnation? Nothing forever more, or a new life of suffering? For example in a frightening and despicable body? As a baboon, a chicken? A powerful mafioso?

His humor can be missed if not read carefully, and most of his subtle wit and absurdity is found between the lines, rather than in his plot.

The “post-exoticism” movement is Volodine’s self-created genre that is fleshed out further in his novel, Post Exoticism in Ten Lessons, Lesson Eleven; the genre effects radicalization and change of previous narrative structures to introduce new literary elements of an absurd nature, from plot to created language. It details images of jail cells and interrogations, afterlife and listlessness, revolution and disillusionment, and human depravity. Not what many would imagine a comedy to consist of, and yet Volodine’s mastery of the “post-exoticism” craft makes philosophy a digestible and enjoyable read. His style is entirely authentic, devoid of any accepted pretext in style or plot as he has created not just a narrative, but a literary atmosphere entirely from his own cosmos. Honesty is best served on a platter of bowel indigestion, irrational fear of spiders, and one horribly grotesque theater performance. Our fear and paranoia of death (and what may follow) is inspected by Volodine in Bardo or Not Bardo, a large child with a magnifying glass—and we the ants, chasing after our own tail.

Amanda Klute holds a Bachelor of Arts from Washington College in English Literature and Theatre. In addition to her internship at Cleaver Magazine, she has worked and written for The Summerset Review, The Collegian, and is an avid member of JASNA’s newsletter, Bits and Scraps. She is currently located on the East Coast and is a freelance writer and director.