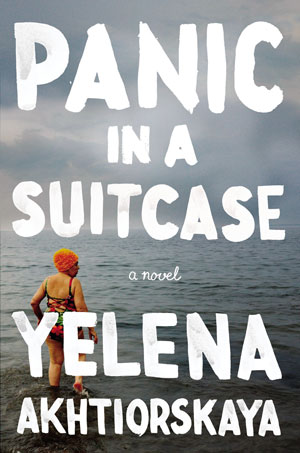 PANIC IN A SUITCASE
by Yelena Akhtiorskaya
Riverhead Books, 307 pages

Late in Yelena Akhtiorskaya’s debut novel, Panic in a Suitcase, a character recalls a classic tale “about the lady who goes to see the rabbi and complains that life is so terrible with her slob of a husband and the crying children in a tiny apartment with such neighbors you start to think it might be better to be homeless, and the rabbi advises the lady to get a goat…” In the version I remember, the rabbi continues recommending that the lady bring another animal, and then another, one at a time, into her very crowded house, until finally, when the family is suitably miserable, he recommends getting rid of all the animals. Back to where they started—the original crowded condition—suddenly feels luxuriously spacious, and the family can’t thank the rabbi enough.

I was surprised to see that Akhtiorskaya chooses to bring in an abbreviated telling of the story, introducing only one goat into the house rather than an entire menagerie, because so much of the fun of Panic in a Suitcase is its comedy of excess, her ingenuity for adding just one more thing than you expect, a zinger on top of a zinger. Think Tom Waits, Roberto Benigni and John Lurie exuberantly chanting, “I scream, you scream, we all scream for ice-cream” in “Down by Law.” Think one more relative than you thought possible coming to stay at the family dacha.

Panic in a Suitcase tells the story of Pasha, a poet who lives in Odessa and his niece and extended family who live in Brighton Beach, Brooklyn. This niece, Frida, idolizes her uncle, the “great Russian poet Pavel Robertovich Nasmertov, who wasn’t really Russian considering that he’d never lived in Russia proper but in Ukraine, only don’t dare call him Ukranian, and furthermore was Jewish, which in Russia qualified as a separate nationality if not species, though he wasn’t really Jewish, having converted to Orthodoxy…” and so on. The writing inflates and deflates, moving with great energy. The world itself appears sometimes larger and sometimes smaller than it actually is. Akhtiorskaya encapsulates in a single swift sentence the essence of this story: “It was as if the city were shrinking and Pasha expanding.” 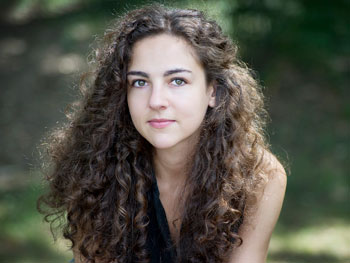 In the first half of Panic in a Suitcase, Pasha visits Brooklyn. In the second half, Frida visits Odessa. Regardless of where they are, there’s a lot of getting lost. Oars fall from rowboats and sink beyond reach. Subway routes are complicated. Hurricanes can make a day at the beach disorienting. Sneakers are left behind at the dacha. Frida recognizes the lesson she needs from the remembered tale: “Several times in one’s life, a good sobering was required, and that’s what this trip was—a blatant disappointment that would serve as an electric charge to zap the elements back into motion, realigning the facets of her life that had been allowed to slacken into disrepair and stagnation.”

Another classic tale came to mind after reading Panic in a Suitcase—the story of Gimpel the fool as he sets out one day to travel from Chelm to a distant village. En route, he decides to take a nap. To remember which way to walk when he awakes, he points his shoes toward his destination. But a stranger comes across Gimpel’s shoes, tries them on, puts them back—toes directed not to where Gimpel means to go but Chelmward. Gimpel walks into Chelm and is amazed by how this new village is so like his own, and he marvels at how all the people look just like his neighbors and know his name! In Panic in a Suitcase, there is a similar sense of an uncanny resemblance between the place of origin and the place of destination. Brighton Beach or Odessa: Where does the family feel more at home?

Akhtiorskaya will puncture Frida’s fantasy of an idealized existence in Odessa (all it takes is a gust of wind). Still, Akhtiorskaya lets us see how home is less defined—larger—than the Nasmertovs and we might have thought. Exile and the diaspora are not what they used to be.