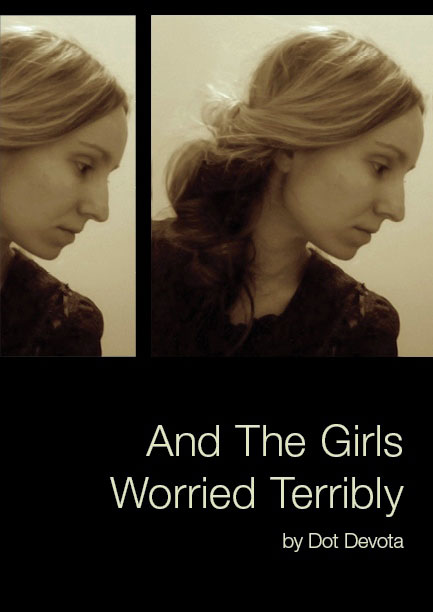 Newly single for the first time in three years, I found myself claiming both the titles of housewife and provider: dish-washer and bill-payer, cook and changer of lightbulbs.

My mother, on telephone calls, “hints” that she needs grandbabies—and soon. She says things like, “You know you want kids.” I backpedal. I won’t have time with all the poetry gigs I’ll have. I want to live in a dangerous place; I’m not sure where yet. I converted, and I want to become a nun—when? You know…yesterday. She says things like, “I hope you have a child as stubborn as you are.”

Dot Devota, in her book, And the Girls Worried Terribly, puts aside marriage to man, woman, or God and marries self to self. Through bizarre and delightful celebration imagery, Devota leads us to conception through physical and mental violence.

Devota’s title has been carefully selected from a caption in Oliver Statler’s The Black Ship Scroll. In this historical work, Statler writes of an instance when Japanese singing girls were to have their photographs taken by foreigners, “and the girls worried terribly,” that “the soul might leave to take up residence in the ‘new self.’” It is from the concept of these two selves that Devota’s book is threaded and spun.

Even from the start, in frantic, dream-like sequences, the reader encounters creatures spawning from a vibrant and rapidly shifting earth—both of which are dependent upon the speaker. Bees, compared to champagne bubbles, become excited by mascara-laden eyelashes instead of blooming flowers. In this universe, bees are drawn to women instead of natural blooms— connecting nature to the self in alluring and magnifying ways. The speaker, in fact, finds her voice “amplified” by nature in her poem “iii”:

a diabolical union of one alongside the self’s
dubious chatter we look lovely.

Through giddy wedding imagery, Devota’s speaker marries herself amid the wild earth—her voice reverbing between the sharp peaks of mountains, reflecting on her own vibrance.

Looking at Devota’s Woolf-esque double-image on the cover of her book, one can’t help but ask: who are these two selves? Why do they need to be married in order to be one?

The opening poem in Devota’s book, entitled “Gene,” was written after she spent time on a ranch watching the separation of calves from their mothers. She opens this poem discussing the death of parents and the “muteness of nature.” By putting aside ancestry and the earth, Devota leaves only the self to explore:

Through the first section of her book, Devota unites these selves, which seem to come from different times—and, notedly, come from the past. Solemnly Devota leaves the reader to ask: If I marry myself, can I die alone?

Leaving images of earth’s fruitfulness and weddings behind, Devota embarks on the second section of her book: “The Silence That Endures In Scenes From My Massacre.” Devota opens with the image of fire as penetrator: “a flame swirling in oil, an erection,” a fitting image to follow her wedding. Quickly the images plot a new course as the author repeats the image of fire to create a story of severance. “…My promise wilts/raped in a bed of talent with hands clasped,” she writes. Although this section clearly refers to violent separation from self, Devota deals with this split wryly. She writes about selling the wedding dress, stating:

This is not really what they want me to talk about
how badly I’ve been mistreated, how no one is buying the dress—
I hung it for so cheap!
my ghost still in it
so I type 0 into the search
yields no results
I type 00 the space between us.

Later in this section, she refers back to this as “the war of 00.” Ladies: isn’t getting into a wedding dress a war in itself? Tell me I’m wrong. Devota writes about the split between the two selves as slim as one dress size, tongue-in-cheek. (Wedding dresses, it should be noted, usually only fit the person they are created for. Second-hand wedding dresses have busts too big, tiny waists, and trains that puddle the floor. You get the picture.)

In the final section, “It Is Love That I Don’t Write,” Devota exchanges the imagery of violence and flame into the imagery of birth and light. It is here that Devota asks: what will the two selves within my body produce? And then: is my creation dead? Up until this point in the book, we have seen the earth produce fruit and violence, and themes of motherhood have been suggested. However, it is this final section that suggests what the speaker’s body is full of: “cancers,” “my gut a den of cockroaches,” “in the skin of the text are ten exits,” “the organs that rotate consistently for my bad color.”

but one contains two

it was the ice ages
we were forgone.

It is in this section that Devota’s speaker is claiming ownership over her own body, regarding both filth and beauty as her creation. Through this declaration of self, Devota reclaims her body as a space she can dwell in:

changing is giving
myself the body
back.

It is in this reclamation of the body that the two selves—finally—find wholeness, woman and herself birthing ugliness and loveliness. She and she inhabit the same space, becoming both housewife and provider—both selves creating without apology.

Julia Paganelli is a first-year Poetry MFA candidate at the University of Arkansas. Her poetry chapbook, Blush Less, is forthcoming from Finishing Line Press in Spring 2015. Her recent publications can be found through BOAAT Press, Chautauqua Literary Journal, and Connotation Press.